Grace Poe and the lost presidency 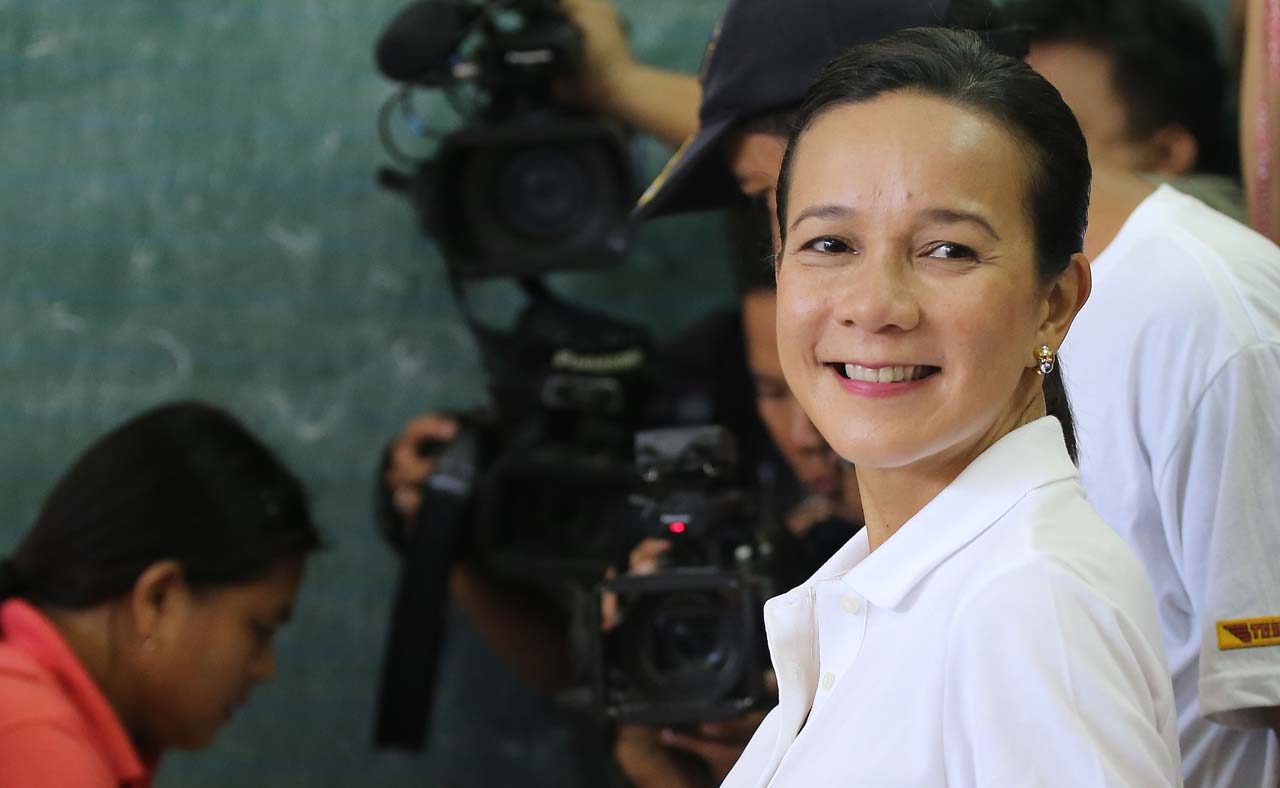 MANILA, Philippines – The presidency could have been hers.

Senator Grace Poe, the first-time politician, gunned for the highest post after receiving skyrocketing survey ratings in 2015. Recognizing her potential, other camps, including no less than President Benigno Aquino III, wooed Poe to be their vice presidential candidate.

But Poe declined any offer to be a running mate. Armed with a clean image and high numbers, the neophyte senator decided to aim for the presidency.

This decision did not come without any repercussion. Disqualification cases were filed against her left and right. Still, Poe generally managed to stay on top of the game, with a decline in numbers here and there. For Poe and her allies, a favorable resolution of the cases would result in a surge in her numbers, making the road to Malacañang a walk in the park.

Expect they did. But after the Supreme Court allowed her to run for president, her numbers did not move as they wished. By this time, a latecomer to the contest – Davao City Mayor Rodrigo Duterte – had snatched the lead from her. Duterte’s surge was so unstoppable that his controversial rape remark and his alleged millions in secret bank accounts hardly affected his numbers. His rise was so relentless that any move by Poe – who was then second to Duterte – or any of his rivals barely dented his ratings.

It’s difficult to sustain an early peak in surveys, said political analyst Aries Arugay. In the case of Poe, he said, it was even harder because she had no machinery and experienced campaign handlers.

One key challenge in the Poe campaign, said Arugay, was her “hollow” messaging. Unlike Duterte who had a focused campaign message, Poe’s “Gobyernong May Puso” was supposedly “too soft and incomplete.” This was primarily brought about by her focus on the disqualification cases, he said.

“Since her campaign focused so much on her right to run for office, when it was granted, her campaign was not able to quickly transition to her platform. Apart from honest and clean governance, it is not clear what Poe represented,” Arugay said.

It was unclear whether Poe was standing for continuity or change, he said. During the early part of the campaign, Poe said no one has the “monopoly” of Daang Matuwid – the slogan of the Aquino administration. But after the surge of Duterte, who ran on a platform of change, Poe added the same concept in her messaging and hit the Aquino administration. (READ: Grace Poe: Filipinos fed up with Daang Matuwid, want change)

While the tough-talking mayor was deemed to promote change through violence, Poe said she would push for “humane” transformation.

“She did not fascinate the public imagination since her campaign was more of the same than actual changes. Empathy without action is nothing, empathy without strength and will is insufficient. Tapang at Malasakit trumped Puso,” Arugay added.

It did not help either that Poe was associated with old names in politics and business, he added.

Looking back, Galing at Puso campaign manager Ace Durano said the team could have focused more on 3 core programs of Poe’s platform: free meals for children in public elementary level, free tuition fee for the poor in state universities and colleges, and salaries for barangay workers.

Poe tweaked her messaging several times in the middle of the campaign to address Duterte’s rise in surveys.

Immediately after survey results showed Duterte snatched the lead from her, Poe added the issue of peace and order – the core of Duterte’s platform – in her campaign speeches.

During the latter part of her campaign, Poe released “more focused” political advertisements, which highlighted her desire to end “endo” or contractual labor. This came around the same time when she again sought the help of her mentor and political strategist Senator Sergio Osmeña III, with whom she had had political differences.

Her ratings showed, however, that these changes hardly improved her overall numbers. At this point, she began to openly criticize her rivals, especially Duterte, whom she called an “executioner.”

Arugay said more than half of survey respondents had already decided at that point and that any move by Poe was already futile: “More than half of the respondents already made up their minds. So Poe’s adjustments had no bearing at all. She was relegated to second choice.”

For Arugay, the energies of Poe and her team were lost in fighting disqualification issues over her citizenship and residency instead of the real message of her campaign.

Before the official campaign period began, Arugay told Rappler that Poe should “go beyond why she has the right to run and focus on why she is running and what she is representing.”

Another analyst, Edmund Tayao, shared the same sentiment as early as February. He said Poe should just allow her lawyers to defend her in court and not allow her rivals to dictate public discussion.

Poe, in retrospect, said she should have done the same thing.

(I think when it came to the cases we filed. Although your questions were about the case in the Supreme Court, I should have not answered them as much and instead just relayed my platform. The cases became the center of discussion and not my plans for the country.)

With cases hounding Poe’s candidacy at the time, campaign finances came by in trickles.

The sunny expectations from her camp turned dim, however, when her numbers either stayed the same or declined after the High Court released the decision allowing Poe to run. Arugay said this could have contributed to her low campaign funds the entire campaign, something that is highly important in any presidential bid, he said.

Running a national campaign is no easy feat, especially if one does not have any political party and machinery.

While Poe got the support of the majority of the Nationalist People’s Coalition, this only came shortly before the SC allowed her to run. For the most part of the campaign, Poe struggled with political alliances. There were even times when no politician would welcome her and her slate to certain areas and provinces.

“Remember they did not even adopt NPC as their party? They are expecting people to jump ship. Local officials “hedged” and waited until late March and April. By then Duterte was already the clear front runner,” Arugay said.

The team also lacked ground support – something that carried Duterte, who, like Poe, had no strong machinery.

“Given the other candidates had strong machinery and local support, Poe’s position was really difficult. Her campaign organization was the weakest among the top 4. Kulang ng legs (It lacked legs) from the local level,” Arugay said.

In the end, Poe had to make do with what she had. She decided to focus her resources on campaigning in the rest of Luzon and Metro Manila, where she received high ratings based on surveys.

Aside from her campaign manager Ace Durano and running mate Senator Francis Escudero, Poe had a core group of people helping her. Some of the heads of her campaign, however, had no national campaign or political experience.

Marty Escalona, a senior banker who is a core member of Poe’s campaign team, admitted he is new to politics. Despite this, he said “half the battle was won” when they built a team composed of both experienced and inexperienced members.

“I am a neophyte at politics, much more in heading a parallel campaign team. Indeed it was a huge learning for me and truly a wonderful endeavor,” Escalona told Rappler.

Principled campaigning: A boon or a bane?

Poe and her team were proud to say that they ran a “clean” and issues-based campaign. Never did they subscribe to black propaganda, they said, to push for Poe’s candidacy.

While this may be a positive development, it could also be a candidate’s kryptonite. Arugay said that practicality often trumps principles in political campaigns, especially in the case of Poe who had difficulty sustaining her early lead in pre-election surveys.

“She was not able to consolidate her numbers. It was hard for her to go beyond 35%. That’s already her peak. So the difficult thing was to sustain it. That’s where you try to focus on the negative traits and failures of your adversaries,” he said.

He asserted that Poe failed to put Duterte on the spot during the last presidential debate for his controversial rape joke – something that should have been valid, as it caused international and local uproar.

Arugay added that Poe only softly criticized Roxas and Abaya that she did not hit them where it hurt the most – the controversial Disbursement Acceleration Program, which the SC declared unconstitutional, and the failed response during and the rehabilitation efforts after Super Typhoon Yolanda (Haiyan).

But while this may be useful for political purposes, Poe and her camp refused to subscribe to negative campaigning. The senator had repeatedly said she does not want to lose herself just because of the presidential race.

While the elections had shown the inexperience of Poe in politics and campaigns, Arugay said Poe could use the lessons of her failed presidential bid to make a more “cut-throat” come back. Who knows, he said, maybe in 2022? – Rappler.com