Duterte, Robredo to be proclaimed next week 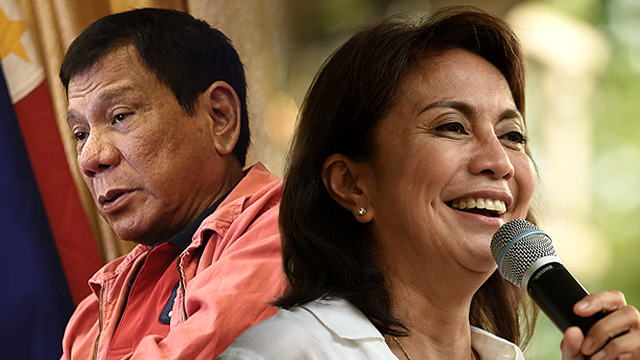 Congress, sitting as National Board of Canvassers, completed the official count of votes for president and vice president past 7 pm on Friday, May 27.

Duterte of the Partido Demokratiko Pilipino-Lakas ng Bayan got a winning vote of 16,601,997 for president, while Robredo of the Liberal Party (LP) won as vice president with 14,418,817 votes.

Robredo had a slim lead of 263,473 votes over strongest rival Senator Ferdinand Marcos Jr of the Nacionalista Party. (READ: Robredo tells supporters: Win impossible without you)

Senator Aquilino Pimentel III, head of the Senate panel in the joint canvassing committee, earlier said that the winning candidates would be proclaimed on Monday, May 30.

However, Robredo’s lawyer Romeo Macalintal said on Friday that the proclamation could take place on Tuesday yet.

Congress finished tallying all 167 certificates of canvass from provinces, chartered cities, and local and overseas absentee voting in 3 days starting Wednesday, May 25.

Members of the committee are set to sign the report and issue a resolution to proclaim Duterte and Robredo as president and vice president, respectively.

Exactly a month later, on June 30, Duterte and Robredo will take their oath, then marking the start of a new 6-year administration.

Duterte earlier said that he will not be flying to Manila for his proclamation, without providing a reason.

Pimentel previously said Duterte’s presence is not mandatory, but encouraged his party mate to attend.

Robredo, who received the news of her victory on what would have been the 58th birthday of her late husband Jesse Robredo, will be coming to Manila for her proclamation. – Rappler.com