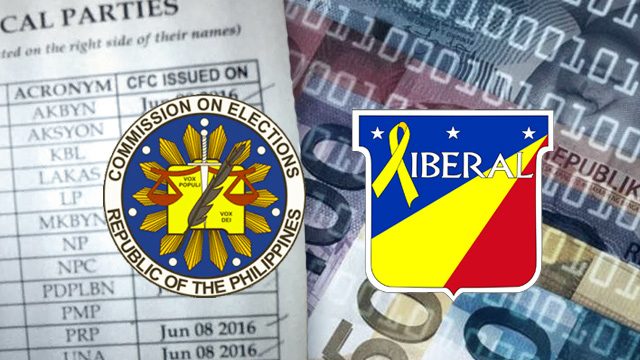 Facebook Twitter Copy URL
Copied
(UPDATED) Spokesperson James Jimenez says the decision benefits not only the LP, which requested the extension, but also others that have yet to file their SOCE

MANILA, Philippines (UPDATED) – The Commission on Elections (Comelec) has extended the filing of Statement of Contributions and Expenses (SOCE) until June 30.

Bautista disagreed with the extension, but voted to allow late filing with fines imposed.

The Liberal Party (LP), which missed the “final, non-extendible” June 8 deadline, requested a 14-day extension with the Comelec. The LP then submitted its SOCE 6 days late.

The poll body’s decision comes two weeks before the start of the term of all elected officials on June 30.

In a press briefing on Thursday, June 16, Comelec spokesperson James Jimenez said the 4 commissioners who voted for the deadline extension cited the “absurdity” of the consequences if the filing period is not adjusted. He added that the will of the people should matter.

“Are we going to defeat the sovereign will of the people just so that we can actually impose what is essentially a documentary requirement?” Jimenez asked.

Section 14 of Republic Act 7166 – the law providing for synchronized national and local elections – states that if a political party fails to submit its SOCE, its winning candidates would not be able to assume office.

This was reiterated in Rule 10 of Comelec Resolution 9991, which also states that submissions beyond June 8 “shall not be accepted.”

If the Comelec had voted against the extension, Vice President-elect Maria Leonor “Leni” Robredo of LP would not have been allowed to assume office. Her party filed its statement late, even if she filed her own SOCE on June 8.

Four winning senatorial candidates – Joel Villanueva, Ralph Recto, Leila de Lima, and Francis Pangilinan – as well as many local officials who ran under the LP banner in the 2016 polls would have also had the same fate. All 4 senators-elect filed their SOCEs on time.

LP’s 5th senatorial bet, Senate President Franklin Drilon, and even its presidential candidate, Manuel “Mar” Roxas II, have not yet filed their SOCE.

“The fallout of strict implementation in this case will not just affect one party,” Jimenez added. Besides the LP, Aksyon Demokratiko and Pwersa ng Masang Pilipino (PMP) also failed to file their SOCEs on time.

A total of 40 governors and 115 congressmen likewise failed to submit campaign spending reports by June 8, said Jimenez. “The extension will benefit everyone, not just one party in particular,” he added.

However, in past elections, extensions of SOCE filing had been allowed by Comelec. Jimenez explained, for instance, that some candidates had experienced difficulties with documentation requirements in filing their SOCE.

“As we improve the way we enforce campaign finance rules, you have to keep an eye out also for the practical effects,” Jimenez said. “In this case, the practical effect is staring you in the face: you have people who were elected, but cannot assume office.” – Rappler.com