Facebook Twitter Copy URL
Copied
The vice president remembers waiting as early as 1am for the ferry to Masbate, leaving her husband Jesse to take care of their three daughters

LEGAZPI CITY, Philippines – When Masbate in the Bicol Region ranked as the third poorest Philippine province in 2005, a forty-year old lawyer from Naga City, Camarines Sur visited the island every month to bring legal services to poor folk.

Few of the youth who underwent paralegal training with the Sentro ng Alternatibong Lingap Panligan (SALIGAN), had imagined that their mentor, described as simple but efficient, would eventually become Vice President Leni Robredo.

“Let’s admit it, as far as we can remember, Masbate has not really been noticed by the national government and previous Presidents,” said Rep. Narciso Bravo of the province’s (1st District).

Even before Robredo became a politician, she already had a deep connection to Masbate. She provided paralegal training to basic sectors covering the project areas of Milagros, Mandaon, and Balud, Bravo told 40,000 Masbateños during the April 13 rally for the presidential aspirant and her running mate senator Kiko Pangilinan.

The vice president also referred to her early days, saying she would wait as early as 1am for the ferry that took her team to Masbate, leaving her husband Jesse – then on his second three-term stint as mayor of Naga City – to take care of their three daughters.

“This is probably one of the many reasons why VP Leni got more than 120,000 votes over Marcos Jr in Masbate during the 2016 election,” Bravo said.

“We felt a genuine connection with her and I’m certain that this will happen again in the 2022 election,” the congressman said.

“This is one of my biggest flexes, that I was one of the 164,810 Masbateño who voted for VP Leni and I am proud because I made the right decision,” he added.

Bravo is challenging Marcos ally and incumbent governor Antonio Kho in the May 9, 2022 polls.

“Call it fate, but no one can deny, VP Leni’s road to the presidency started in Masbate, on this very same road we now call JM Robredo Boulevard,” the legislator stressed.

The vice president started her political career a year after the death of Jesse, who was Interior Secretary when his plane crashed in Masbate.

Robredo said that even after Jesse’s remains were retrieved in Masbate waters and they brought him home to Naga, “parang pakiramdam ko nandito pa din siya sa dagat ng Masbate (I feel as if he remained in the sea of Masbate).”

She reminded Masbateños they carried the power to change Masbate province if they vote for the right public servants, from the Presidency down the line to the smallest municipalities.

Robredo said that Masbate City was “like the crown jewel of the province, always known for good governance, innovative programs” but the rich potential of areas outside the city remained untapped.

Masbate’s poverty numbers have improved since Robredo’s paralegal days, with the poverty incidence dropping to 33.0% in 2018 from 45.4% in 2015. But the two year pandemic has again worsened the problem, with NEDA’s first semester 2021 report showing an increase in the poverty incidence to 23.7% from 21.1% in the same period of 2018. 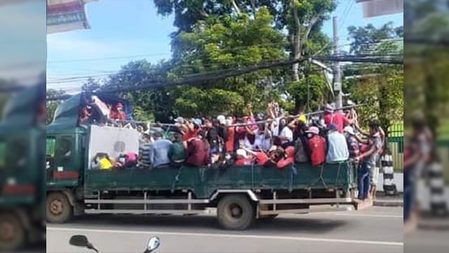