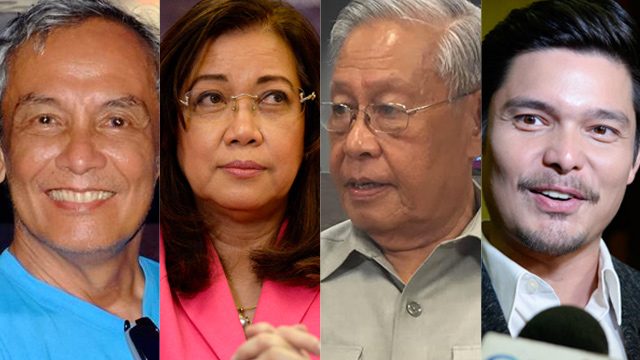 Facebook Twitter Copy URL
Copied
(UPDATED) Dingdong Dantes is among the names being considered by the opposition, according to Liberal Party president and Senator Francis Pangilinan

MANILA, Philippines (UPDATED) – The opposition bloc on Monday, September 10, revealed its initial list of candidates for the 2019 senatorial elections.

Pangilinan said the list was a result of a series of meetings between the Liberal Party and its coalition partners over the past months.

“I can confirm that our list has more than enough names to fill a slate; we have no shortage of people who are qualified and competent, who have sterling track records, and who can help change the trajectory of the country,” Pangilinan said.

Asked if this is a wish list or already a done deal, the senator said that they are “still in talks with a number of them.”

Pangilinan said they would soon present the names to Vice President Leni Robredo. He said they are expecting the process to be completed before the end of September.

Of the 18, only Aquino was included in the so-called Magic 12 in pre-election surveys, ranking 6th to 14th in the July 2018 Pulse Asia survey.

The Commission on Elections has set the filing of Certificates of Candidacy from October 1 to 5. But the Senate and the House of Representatives have separately approved resolutions calling on the Comelec to move it to October 11 to 17. – Rappler.com