MANILA, Philippines (UPDATED) – The Liberal Party (LP) announced its first 3 senatorial candidates for the 2019 elections, all of whom were scions of opposition leaders during the Martial Law years.

They were nominated on Tuesday, September 25, in a resolution of the LP’s National Executive Council (NECO). The resolution was approved in a meeting of the NECO with several party members held in Barangay Loyola Heights in Quezon City.

Aquino, Diokno, and Tañada are relatives of opposition senators who staunchly fought against the dictatorship of the late president Ferdinand Marcos.

Aquino is the nephew of the late senator Benigno “Ninoy” Aquino Jr, whose assassination in 1983 is considered to be one of the key events that led to the 1986 People Power Revolution.

The younger Aquino is known to be a champion of legislation on entrepreneurship like the Go Negosyo Act of 2014 and education like the free tuition law. 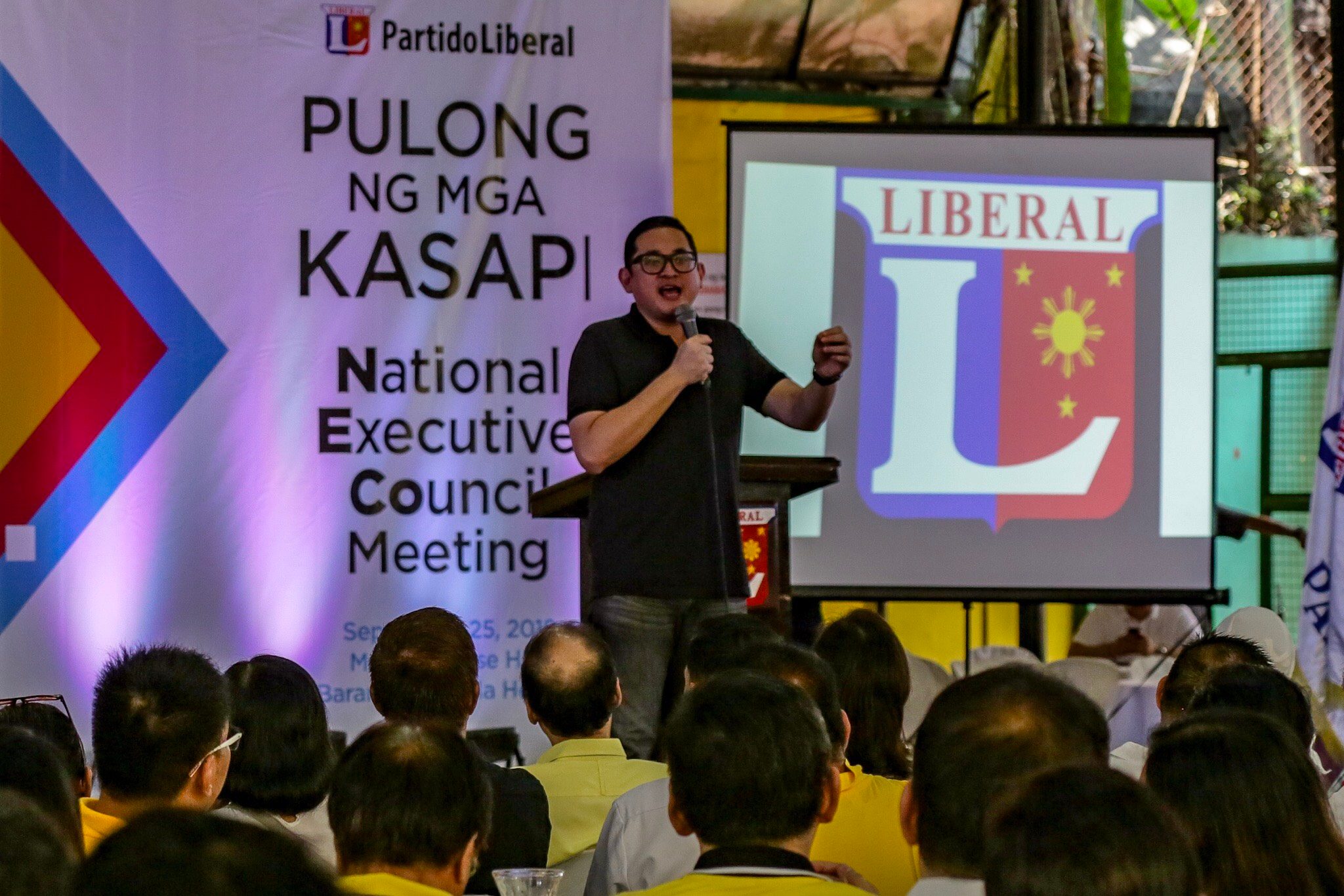 Diokno is the son of ex-senator Jose “Pepe” Diokno, who is regarded as the father of human rights advocacy in the Philippines. The younger Diokno is the chairperson of the Free Legal Assistance Group and the founding dean of the De La Salle University College of Law.

Tañada, an LP member since 1992, is the grandson of the late senator Lorenzo Tañada, who was known for his fiery speeches against the abuses of the Marcos administration. Tañada’s father, ex-senator Wigberto Tañada, staunchly fought to rid the country of American military bases in Clark and Subic.

Prior to being elected to the House of Representatives, Tañada was a student activist during Martial Law.

What will they advocate for? In their speeches, Tañada and Diokno called for economic reforms and upholding the rule of law, respectively.

Tañada said he wants to amend labor laws in the country so Filipino employees will no longer be victims of labor contractualization or “endo.” He wants to reduce the value-added tax from the current 12% to 10% as well as go after rice cartels and traders who take advantage of the high prices of fuel.

Tañada said he also wants to review the imposition of excise taxes under the Tax Reform for Acceleration and Inclusion law and further strengthen the agricultural sector. Diokno said he has strived to fight for justice the same way his father and grandfather did – an endeavor he hopes to continue at the Senate.

He said now that the country is in a time when even the 1987 Constitution is being disregarded by the government, it is time someone fights for the rule of law to prevail.

(Our Constitution, which should be our main foundation in law, is being attacked. Justice is no longer blind. It now favors the rich and the powerful, the mighty and the strong.)

(It’s time I bring the fight to another arena. It’s time that we make justice a part of the national agenda.) Aquino, meanwhile, talked about the 3 Ls of LP: “laylayan,” referring to how the party aims to be of service to those on the fringes of society, “laban” or fighting for the rights of Fiipinos, and love of country.

He then dedicated the rest of his speech rallying the crowd to throw their support behind him, Diokno, and Tañada.

(We introduced to you 3 names this morning, 3 names who have already shown excellence, solid beliefs and character, and dignity in service.) She said that while Aquino, Diokno, and Tañada are relatives of opposition leaders during Martial Law, they have earned their keep in politics today.

(They did not inherit the position. The only thing they inherited was the good name left behind by those ahead of them. But what they’re standing on now was a product of their own sweat and blood.)

But what about their poor survey standings so far? Aquino, Diokno, and Tañada were in the initial list of 18 names being considered for the opposition coalition’s senatorial slate.

The 3 senatorial hopefuls, however, failed to make it to the so-called winners’ circle in the latest Pulse Asia survey.

Robredo is unfazed. She recalled her own experience during the 2016 vice presidential race. She started with low awareness ratings and even lower preference numbers, but emerged victorious in the end.

(It’s clear for us that we will not let popularity be the main basis for choosing our candidates. It’s clear to us that we have a checklist. Where do our nominees stand on certain issues?) Former president Benigno Aquino III, chairman emeritus of the LP, also urged the party’s members to vote for the right people in 2019.

(If we no longer like what is currently happening around us for various reasons, we can’t merely vote. We can’t just say, “As long as I have voted, that’s okay. I hope no one sees my vote….” Let’s make sure the good ones will make it, not those with questionable character.) – Rappler.com