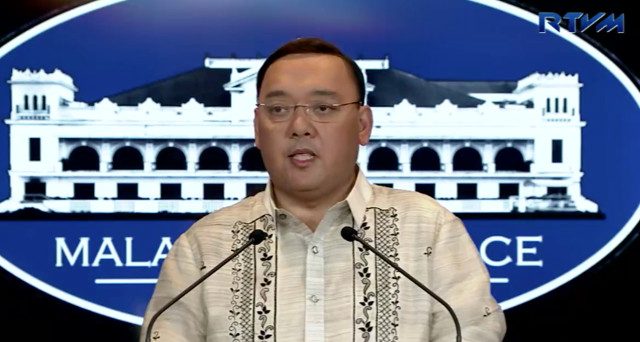 MANILA, Philippines – President Rodrigo Duterte has asked his spokesman, Secretary Harry Roque, to drop his Senate bid and instead stay in his administration but with a different position.

Roque said in Palace briefing on Friday, October 5, that Duterte made this offer on Thursday night, October 4.

“We had a command conference where the President asked me to stay and offered me a position which currently does not exist yet. While there was no categorical agreement on what to do, I did say I would consider it and I wanted the weekend to think it over,” said Roque.

Asked if he was resigning as spokesman right then and there, Roque said he would make a final decision by Monday, October 8.

Roque would be deemed resigned from his current post if he files his certificate of candidacy during the week of October 11 to 17.

Roque had been endorsed by Davao City Mayor Sara Duterte Carpio’s regional party Hugpong ng Pagbabago (HNP). He has been joining HNP events in various parts of the country.

The President himself gave an idea of what he thought of Roque’s Senate bid in a speech to Philippine Military Academy alumni on Thursday. He ribbed Roque then that he would likely lose in the senatorial elections  because the military supposedly did not support him.

(Roque and others, want to become senator. I said [to Roque]: “Stop it. Just be on standby. I’ll give you another job. You won’t win.”)

Duterte said that when Roque asked him why he wouldn’t win, he told his spokesman, “Ah ‘yung mga sundalo ayaw sa iyo (Soldiers don’t like you).”

The President also claimed on Thursday that the military had no love for another administration official – Solicitor General Jose Calida – but did not elaborate. He had previously said Calida was behind the “research” that formed the basis of his controversial Proclamation No 572 which seeks to void the amnesty of Senator Antonio Trillanes IV.

‘Kept in the dark’

It was floated during the Friday press conference that Roque was offered the post of press secretary, which currently did not exist. Senate President Vicente Sotto had earlier suggested that the Office of the Press Secretary (OPS) be revived in place of the Presidential Communications and Operations Office (PCOO) headed by Secretary Martin Andanar.

Roque said one major consideration that would factor into his decision-making on whether to remain in the Duterte Cabinet was his access to information.

He said he would not be able to continue his job as spokesman if he continued to be “kept in the dark” about the President’s hospital visits.

“In my decision on whether or not to run or accept whatever the Office of the President may have, I will consider the fact that in this capacity as spokesperson I must know everything about the President and I do concede that his going to that diagnostic exam is something I did not know and I am inclined to believe that perhaps I am not in a position to continue with this current function,” said Roque.

He referred to the President’s reported hospital visit on Wednesday that he dismissed as rumors.

“I cannot be effective as a spokesman unless I know everyting about the President. Now people think I lied,” said Roque. “I did not lie to anyone because I simply did not know.”

He said that while he is one of the few Cabinet members who receive a copy of Duterte’s daily schedule, there are large chunks of the President’s activities that are only labeled “private time.”

“Unlike other spokespersons, I had access even to his daily schedule but you can see what happened that I was in the dark and now how can people believe me when I just said he had private time when apparently he had a diagnostic examination,” said Roque. – Rappler.com