Comelec on ‘colorful’ bets: Give them a chance, it’s not easy 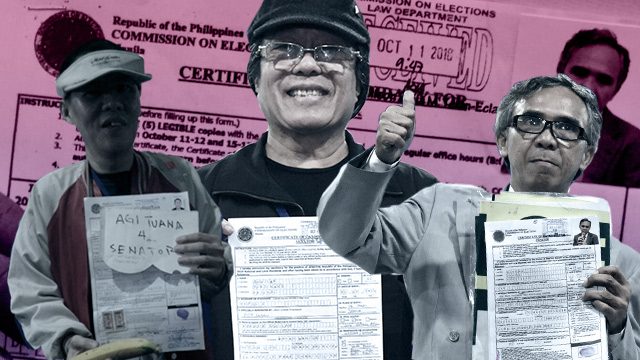 MANILA, Philippines – The Commission on Elections (Comelec) appealed to the public on Thursday, October 11, to give “colorful” senatorial hopefuls, often derided as nuisance bets, a chance to defend their bids for public office.

From the “King of Maharlika” to the ex-husband of Kris Aquino and ex-boyfriend of Mocha Uson, the so-called “colorful” hopefuls dominated the first day of filing of certificates of candidacy (COCs) at the Commission on Elections (Comelec).

Of the 27 who filed COCs on Thursday, 13 were independent candidates while others were virtual unknowns.

Comelec spokesperson James Jimenez cautioned the public, however, against judging candidates only based on their looks.

“We have to give each candidate the opportunity to defend his candidacy,” Jimenez said. “Dudes, remember, hindi madali ang pumunta rito para mag-file ng COC. Hindi ‘yan biro.” (Dudes, remember, it’s not easy to come here to file a COC. It’s not a joke.)

“And these people, at some point during the day, or yesterday or the week before, they decided, ‘I want this enough for me to go there, for me to dress up in a suit, for me to dress up nice and to go there and to put my name out in the public, even knowing na baka pagtawanan ako (that people might make fun of me).’ So we have to give them their due,” Jimenez said.

The Comelec considers it a ministerial duty to accept COCs, and will later subject senatorial hopefuls to hearings to determine if they can run. (READ: Why Comelec entertains ‘habitual’ nuisance bets)

Comelec Commissioner Rowena Guanzon called on the “colorful” bets, however, not to make fun of this democratic process, even as it is their political right to run for public office.

“Kung hindi naman nila tototohanan talaga, ‘wag nilang gawing katatawanan ito o gawin lang souvenir sa Facebook, dahil napakarami ho naming trabaho,” said Guanzon.  (If they are not serious about this, don’t turn it into a laughingstock or make it a souvenir on Facebook, because we have lots of things to do here.)