Oct 15, 2018 4:37 PM PHT
Mara Cepeda
Facebook Twitter Copy URL
Copied
Ex-interior secretary Mar Roxas says he went through a 'crisis of conscience' as he discerned whether or not to push through with his Senate bid in 2019 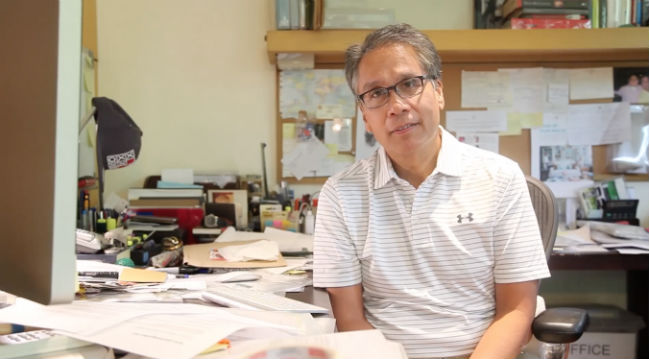 MANILA, Philippines – Former interior secretary Manuel Roxas II will be running for senator in the 2019 elections.

Roxas announced his bid for a Senate seat in a 4-minute-long video posted to his official Facebook account on Monday, October 15, the 3rd day of filing the certificate of candidacy for the polls.

“Apart from pride, may dahilan ba na hindi ako mag-extend ng helping hand? Wala (Apart from my pride, is there another reason why I should not extend a helping hand? None). And so here we are. I don’t have any quit in me and I won’t quit on our country,” said Roxas.

“Kung sa tingin ‘nyo makakatulong pa ako, handa ako. Ino-offer ko muli ang sarili ko sa inyo, at hinihingi ko rin ang tulong ‘nyo dahil ‘di ko kaya ito nang nag-iisa,” he added. (If you think that I can still be of help, I am ready. I offer myself to you, and I am asking for you help because I can’t do this alone.)

While Roxas did not categorically state the position he is running for, former presidential spokesperson Edwin Lacierda and other sources confirmed to Rappler that Roxas is indeed running for senator.

Lacierda was among Roxas’ allies who had been trying to convince him to run for senator again. Out of all the possible opposition bets, only Roxas has the possible of winning, based on the latest Pulse Asia Ulat ng Buhay survey in September.

“It was a long, thought out decision. I think the video shows the inner struggle and the reasons for finally deciding to run,” said Lacierda, who is also a convenor of opposition group Tindig Pilipinas.

Lacierda previously said Tindig Pilipinas would be endorsing Roxas should he finalize his plan to run for a Senate seat. Lacierda said they would formally endorse Roxas soon. (READ: Tindig Pilipinas endorses Senate bets who will ‘fight for all of us’)

Roxas is also among the initial list of 18 names the opposition coalition is considering for its final Senate slate. The final list is set to be announced on October 24.

It took a long time for Roxas to finalize his bid for the Senate. He had, after all, lost the last two national elections he ran in.

Roxas ran for vice president in 2010 but lost to then-Makati mayor Jejomar Binay. A year after, Roxas joined the Cabinet of then-president Benigno Aquino III, his standard bearer during the 2010 elections. His last post was secretary of the Department of the Interior and Local Government under Aquino.

During the 2016 presidential polls, Roxas got over 9.9 million votes, placing a distant second to then-Davao City mayor Rodrigo Duterte, who got over 16.6 million votes.

In his video on Monday, Roxas said he has accepted his defeat in 2016 and has been living a more peaceful life with his family now that he is not in politics.

But he admitted he went through a “crisis of conscience” when his allies tried to convince him to run for office again. He remained conflicted following the rising prices of basic commodities under the Duterte administration. (READ: Mar Roxas calls time-out from travel blog to talk about rice crisis)

Roxas said others had advised him to stay away from politics, out of fear that he might become a “punching bag” once again.

(I went through a crisis of conscience. But I saw that the answer was simple: is the job finished? Will I leave people behind?)

“Mahal ko ba ang bansa natin? Oo. May maitutulong ba ako? Oo. Apart from disappointment, may dahilan ba na ipagkait ko ang tulong ko sa mga nangangailangan? Wala,” he said. (Do I love my country? Yes. Is there something I can do to help? Yes. Apart from my disappointment [in the last elections], is there a reason for me to deny help from those in need? None.)

Roxas, the party president of the once-ruling Liberal Party, is no stranger to the Senate and Philippine politics in general. He ran and won for senator in 2004, a race where he finished first.

He is the grandson of a former president and son of a former senator. He started his political career as representative of Capiz, where he traces his roots on his father’s side. He had also served in the Cabinets of former presidents Joseph Estrada and Gloria Macapagal Arroyo. – with reports from Bea Cupin/Rappler.com