Oct 15, 2018 6:22 PM PHT
Alex Evangelista
Facebook Twitter Copy URL
Copied
Luntiang Pilipinas is an environmental party which aims to raise awareness on the value of trees and the environment among Filipinos 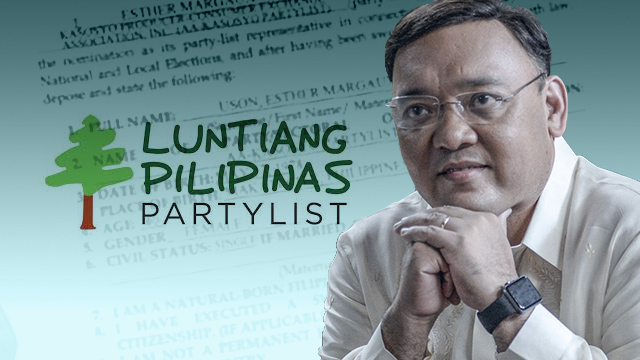 MANILA, Philippines – Former presidential spokesman Harry Roque dropped his Senate bid on Monday, October 15, and decided instead to run as a nominee of the Luntiang Pilipinas party for 2019.

“While it was always my intention to file a certificate of candidacy for the position of senator, I will actually file tomorrow a certification of nomination for party list under Luntiang Pilipinas party list which is an environmental party list group,” he said during his farewell press briefing at Malacañang.

Roque is the first nominee of the new party, with the second nominee being Ciara Sotto, daughter of Senate President Vicente Sotto III.

As Luntiang Pilipinas party representative, Roque said he would push for a ban on open-pit mining.

Luntiang Pilipinas is an environmental party-list group that was first established as an urban forestry program by Senator Loren Legarda in 1998.

The party list would have fielded Legarda as representative for the 2019 polls, but the senator has announced she planned to run as congresswoman of Antique .

As an environmental foundation, Luntiang Pilipinas is dedicated to “help raise the level of awareness on the value of trees by the public.” It also promoted multi-sectoral cooperation in enforcing environmental programs and initiatives.

According to a report by Newsbreak in 2003, Luntiang Pilipinas failed to deliver on its environmental thrusts. While the group claimed to have planted more than two million trees, forestry experts noted that it overlooked the components and right processes of reforestation such as biodiversity, seedling growth, and proper segregation of seeds.

On its 10th anniversary in 2008, Luntiang Pilipinas launched the 10 Million Trees Campaign, with the goal of planting 10 million trees by 2011 to help mitigate the effects of climate change. On the same year, they also opened the National Seedling Bank at Los Baños, Laguna to give communities access to seedlings should they wish to build parks and vegetable gardens.

Other satellite seedling banks are located in Batangas, Antique, Cavite, Quezon, and Iloilo.