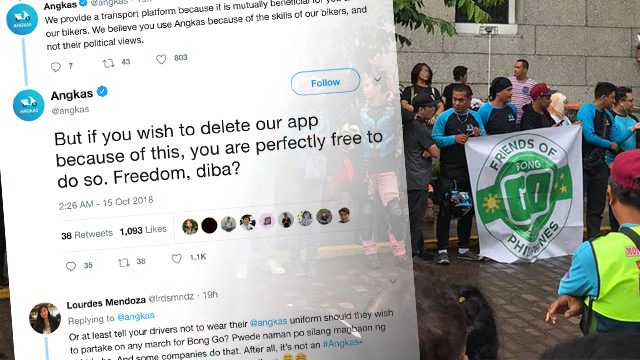 Facebook Twitter Copy URL
Copied
Would you stop using a company's products or services if they become affiliated with a politician or political stance?

MANILA, Philippines – Should a group of Angkas motorcycle drivers show their support for a politician while in uniform?

Netizens expressed outrage when Twitter user @heycaloy shared photos on Monday, October 15, of Angkas motorcycle drivers banding together in front of the Commission on Elections (Comelec) main office in Manila. They were there to support senatorial hopeful and former presidential aide Bong Go, who filed his certificate of candidacy there the same day.

The photos, paired with the caption, “Angkas supports Bong Go for senator? @angkas, kinakaya mo pa diyan, gurl?” (Can you still stomach this, girl?) led many netizens to lambast the motorcycle ride-hailing app for supposedly allowing drivers to take a public political stance.

Angkas’ official Twitter account, known for its quick and witty captions, responded initially to the criticism with a tweet saying, “The only Go I care about is the green traffic light.”

The only "Go" I care about is the green traffic light https://t.co/hxJyaWugUK

The account then followed up with further clarifications, explaining that while the company itself does not have any political affiliations, it will not curtail its drivers’ rights to express their views.

Angkas considers itself an online transportation platform, and does not consider the drivers as its direct employees. Rather, the drivers are seen as partners who use the app to get their own clients.

Angkas is not endorsing any political candidate, but we will in no way curtail our bikers' freedom to express their views. Hindi tama yon.

Democracy is you not liking what our bikers have to say, but us defending their right to say it.

Netizens remained unsatisfied with these responses, saying that Angkas should have at least prohibited the drivers from wearing the company uniform at the event.

The only time that I'll be utilizing @angkas again would be after they would show proof that they have reprimanded their drivers for using their  uniforms during a political event. Nakaka-moisture para sa PR to, besh.

Or at least tell your drivers not to wear their @angkas uniform should they wish to partake on any march for Bong Go? Pwede naman po silang magbaon ng shirt hehe. And some companies do that. After all, it’s not an #Angkas-sponsored event, so why wear their  uniform there

If they were supporting Bong Go in their private capacities, sana hindi naka-uniform. If this isn't Angkas' stand, you should penalize the riders who politicized your brand. Freedom does not mean you can use the brand for your own benefit. Ano ba ang nasa contract bes?!

The backlash led the Angkas Twitter account to give an ultimatum: “If you wish to delete our app because of this, you are perfectly free to do so. Freedom naman, ‘di ba (That’s freedom, isn’t it)?”

But if you wish to delete our app because of this, you are perfectly free to do so. Freedom, diba?

Would you stop using a company’s products or services if they become affiliated with a politician or political stance? Similarly, would you support a company precisely because they have a stance? Share your thoughts! – Rappler.com