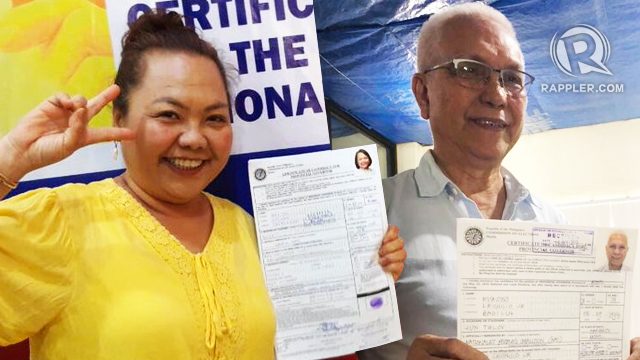 Evasco filed his certificate of candidacy (COC) on Tuesday, October 16. He was the mayor of Maribojoc town from 2007 to 2016.

Evasco is among the aspirants who went to local offices of the Commission on Elections to make their candidacies official on the second to the last day of COC filing.

Here are other notable COC filers on Tuesday, as reported by Rappler and other news organizations.

Then in the 3rd district, Francisco Benitez will be running to replace his brother, Representative Alfredo Abelardo “Albee” Benitez.

Francisco Benitez, brother of 3rd District, NegOcc Rep. Alfredo Benitez, files COC for congressman of the 3rd District. The incumbent congressman will take a break from politics after the 2019 elections./Contributed Photo #PHVote || via @marchelespina pic.twitter.com/QQ3hK5tDJg

In Camiguin, Xavier Jesus Romualdo is gunning for his 3rd and last term as congressman, while Mambajao mayor Jurdin Jesus Romualdo is eyeing a return to the provincial hall as governor. Vice Governor Rudin Romualdo filed his COC for reelection.

*Editor’s Note: ARMM Governor Mujiv Hataman will be running for Basilan representative, not for Basilan governor as earlier reported.