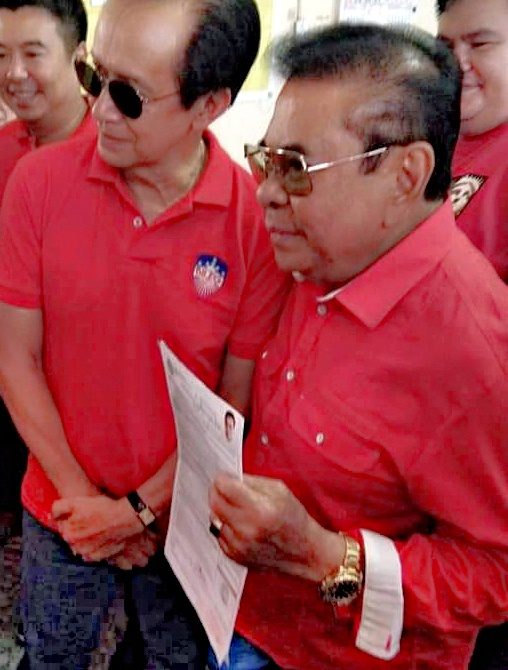 Facebook Twitter Copy URL
Copied
This is an election #throwback as Singson will run with Pablito Sanidad, his running mate in the 1971 elections that ended the Crisologo dynasty in Ilocos Sur

This will be their second try as a tandem.

Singson and Sanidad ended the Crisologo dynasty in Ilocos Sur in the early 1970s.

In the 1971 polls, Singson and Sanidad ran for governor and vice governor, respectively, and defeated the Crisologo matriarch Carmeling – ending the Crisologos’ long hold on the province.

They will now attempt to dislodge another family: the Zaragozas, which have controlled the town for about 3 decades.

Singson will be running against longtime Narvacan Mayor Edgardo Zaragoza.

Zaragosa’s running mate is one his daughters, Fayenna Zaragoza. Both filed their candidacy last Monday, October 15, under PDP-MRRD party. Zaragoza is the former chief of the Philippine Tobacco Authority.

Singson, who placed 4th as councilor in Narvacan in the 2016 elections, arrived at the Commission on Elections office in Narvacan at about 9:45 am on Wednesday.

He was accompanied by Sanidad, as well as his brother and Vice Governor Jeremias Singson and his sister Germelina Singson Goulhart.

They are all running under BILEG Party, which recently coalesced with Sara Duterte Carpio’s Hugpong ng Pagbabago.

Sanidad, one of the stalwarts of the Free Legal Assistance Group (FLAG), is a top private lawyer in Baguio City but was born in Narvacan.

The 1969 stint of Singson and Sanidad as governor and vice governor of Ilocos Sur was short-lived as martial law was declared in 1972.

Sanidad decided to become a full-time lawyer during the Marcos dictatorship and helped found FLAG. A brother, Arno, was imprisoned by Marcos and is also a prominent human rights lawyer.

Singson, on the other hand, caved in to pressures from dictator Ferdinand Marcos, who had Singson’s brother Evaristo arrested.

This left the Sanidads as the only anti-Marcos family in the entire Ilocos region during Martial Law. Their father had served as congressman of Ilocos Sur’s 2nd district.

The Sanidad brothers served as Singson’s legal counsel when he exposed and testified against former president Joseph Estrada during his impeachment trial in late December 2000. Estrada was ousted in January 2001.

Singson and Zaragoza had their recent political feud over black sand quarrying in the town.– Rappler.com