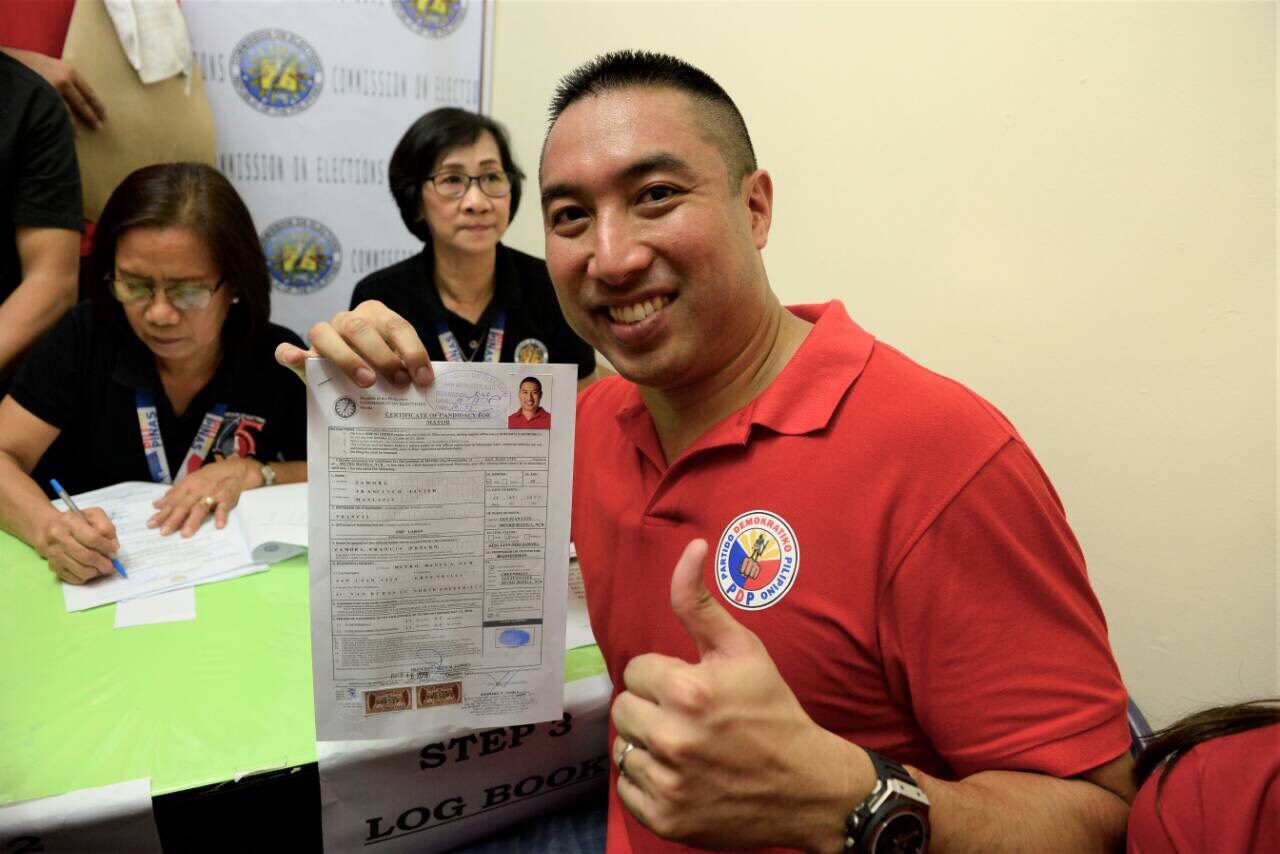 MANILA, Philippines – Despite losing in the 2016 elections and the unsuceesful recall proceedings against Mayor Guia Gomez, former San Juan Vice Mayor Francis Zamora will once again run for mayor of the small but developed city.

On Wednesday, October 17, Zamora filed his certificate of candidacy with the local Commission on Elections (Comelec) office, holding the promise of a “new San Juan” for its residents after decades of being a stronghold of the powerful Ejercito-Estrada political clan.

(Genuine public service has been lost. It’s like San Juan has stagnated. We have been left behind by other cities.)

Zamora will be running under the ruling but divided party PDP-Laban, alongside his reelectionist congressman father Ronaldo Zamora.

Zamora’s defeats: A renewed San Juan – this was also Zamora’s battlecry in 2016, when he went up against Gomez, who has a son with former president and now Manila Mayor Joseph Estrada, Senator JV Ejercito.

It was the same call he gave when he supported an election recall petition against Gomez. He almost had what he wanted: the San Juan Comelec in April the verification of 30,000 signatures attached to the complaint.

The Comelec, however, failed to finish the verification of signatures and to set hold an election before May 13 – recall polls are prohibited a year before  a regular election. (FAST FACTS: The recall process)

This allowed Mayor Gomez to finish her final term.

The silver lining: While the two losses stung, Zamora sees the approved recall petition as a sign that San Juaneños believe in his new style of leadership.

“The fact that the Comelec approved our recall petition with 30,000 signatures says something,” Zamora told Rappler.

For 2019, he said he is running on the promise of renewing San Juan by focusing on the platforms of accessible education and health care. He added that he hoped he could reinvigorate the city’s business boom, which has so far been known primarily for shopping hub in Greenhills.

He has a new rival: He will run against Janella Estrada, one of the youngest bets of the Ejercito-Estrada dynasty. The incumbent vice mayor of San Juan, she is the daughter of former senator Jinggoy Estrada – a niece of Mayor Gomez’s son.

“I will continue the projects of Mayor Guia…. I do feel nervous about the upcoming  elections, but I get confidence from the numerous projects I’ve done for San Juan,” Estrada said after filing her COC on Tuesday.

The new breed from the same name which has beaten him does not appear to faze Zamora, pointing back to 2016, when he only lost by over 1,000 votes against Guia Gomez.

“And the fact that 30,000 signed the recall petition says that 30,000 has lost trust in their brand of leadership,” Zamora said. – Rappler.com