Facebook Twitter Copy URL
Copied
They shed their yellow shirts, and do away with the classic ‘L’ sign. Voters, they believe, don't care about colors anymore.

MANILA, Philippines – For spectators and many of the supporters who came to Barangay Parang in Marikina on Wednesday morning, October 24, the gathering at the village covered court had the stamp of a Liberal Party (LP) event.

The traces were unmistakeable. Banners, for one, were yellow. Giant cutouts of Mar Roxas’ face peeked through the crowd in front of the venue.

Enter the faces of the LP: former president Benigno “Noynoy” Aquino III, Vice President Leni Robredo, and Senator Francis Pangilinan arrived together, signaling the start of the official introduction of the opposition candidates for the 2019 senatorial elections.

But even reelectionist Senator Bam Aquino, one of two opposition candidates faring better than other bets in the pre-election surveys, is quick to say this is not about the former ruling party. 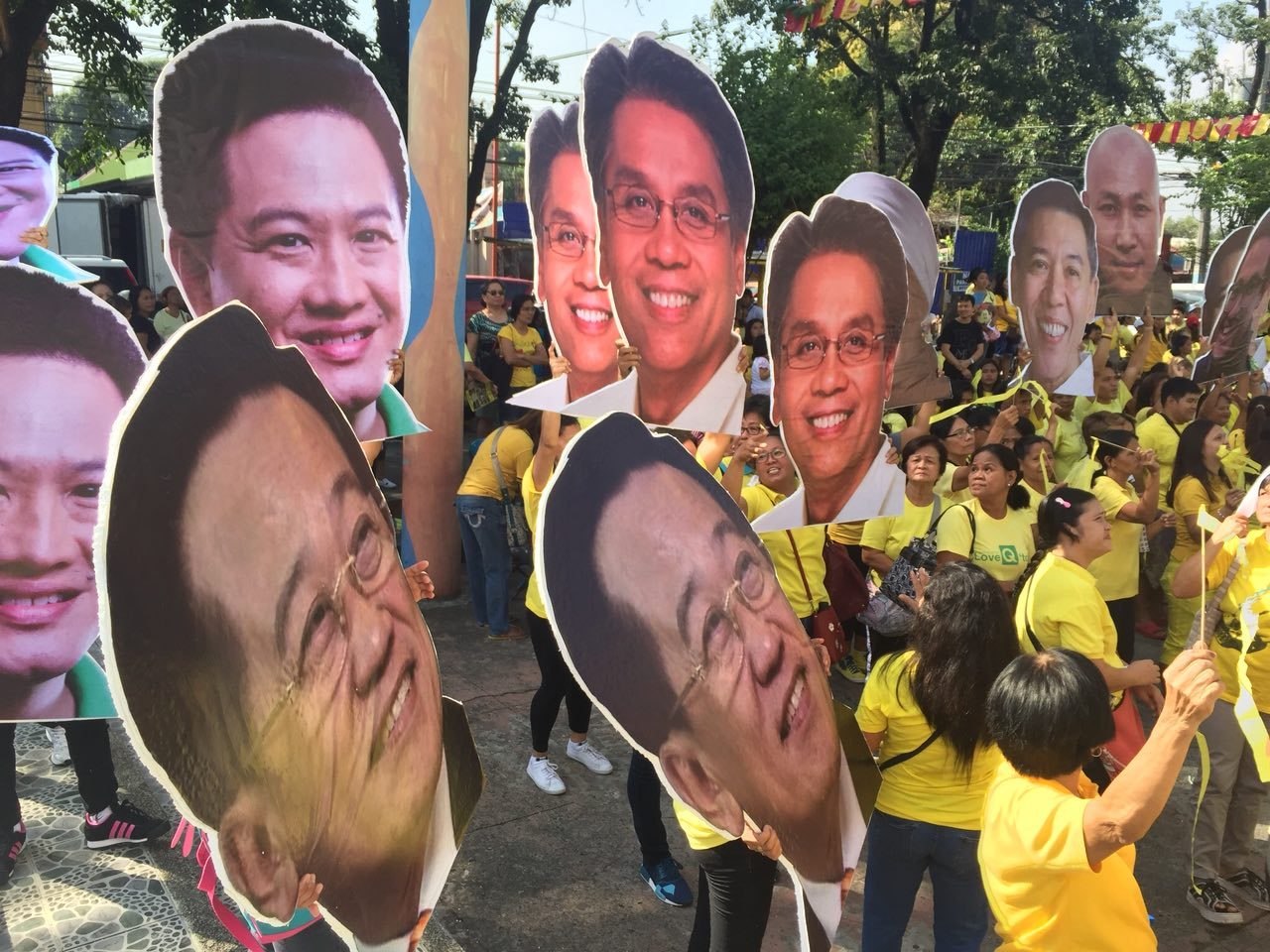 Bam Aquino said the Opposition Coalition – “Oposisyon Koalisyon,” they call it – is made up of the LP, Aksyon Demokratiko, Akbayan, and Magdalo.

Wednesday’s event was different from past LP events in terms of venue. The launch was done inside a covered court in Marikina – easy access to common Filipinos who wanted to watch or were just curious.

Deputy Speaker Miro Quimbo, congressman of Marikina’s 2nd District, said his city was chosen as the launch site for the senatorial bets because of its political significance.

The mood was festive, as a youthful band with a female vocalist sang renditions of popular OPM songs, like Bamboo’s “Noypi” and the Buklod classic “Tatsulok.”

Although 6 of the 8-person slate are running under the LP banner, none of them wore yellow on Wednesday. None of them did the classic LP “Laban” hand sign.

The certificates of nomination and acceptance (CONAs) of Gary Alejano, Aquino, Chel Diokno, Samira Gutoc, Mar Roxas (not present because of a prior scheduled trip abroad, says Aquino), and Erin Tañada were issued by the LP.

Romulo Macalintal is an independent candidate, while Florin Hilbay is under Aksyon Demokratiko.

The term “dilawan” or yellow-colored – in reference to the political color of the LP and its supporters – has been attached to administration critics by President Rodrigo Duterte’s supporters.

Has being “dilawan” become a handicap, and is there an effort on the part of the opposition to overcome the tag? (READ: The fall of the ‘dilawang’ Liberal Party)

(The Filipino people do not identify with yellow or red or blue or green. What they’re looking for is solutions to the problems of the Filipino family. And I think, at this point, what is important is to present to the people who will work for our fellow Filipinos.)

(I think color is not important to the people, that’s superficial. What is important is a person’s stance, principles, not whether they’re yellow, blue, red, or white.) But who is the real opposition?

In the last months, LP-allied groups, especially those belonging to the resistance coalition Tindig Pilipinas, have shared stages and rallies with left-leaning personalities.

Once a floated senatorial candidate, ousted chief justice Maria Lourdes Sereno even pitched for the liberals and progressives to come together to resist the administration.

The final slate, however, is missing the key candidate of the Left: Neri Colmenares.

“You can ask Senator Kiko Pangilinan, who is the campaign manager. Alam ko po mahabang usapan ‘yan. Kami naman po walo, 12 naman po ‘yang iboboto natin, so may space naman po for other independents to come in and coalesce with us,” Aquino said.

(You can ask Senator Kiko Pangilinan, who is the campaign manager. I know there was a long discussion on that. But there are only 8 of us, and voters will vote for 12, so we have space to accommodate other independents who want to coalesce with us.)

In June, Senator Risa Hontiveros said the fundamental difference between Tindig Pilipinas and the Left is that the latter still had members in high positions in the Duterte administration.

But since then, Liza Maza has resigned as National Anti-Poverty Commission secretary, and Duterte has fired labor undersecretary Joel Maglunsod, the last left-leaning official in his Cabinet.

In September, during the rallies commemorating Martial Law, only a handful of Tindig Pilipinas members attended the Left-led rally in Luneta, but only in their personal capacities.

“Palagay ko magbabago-bago pa rin ‘to before the official start [of the campaign period], which is February, but this first 8, buong puso ko pong masasabing maipagmamalaki nating magtatrabaho,” Aquino said.

(I think there will still be changes before the official start [of the campaign period], which is February, but this first 8, I can say wholeheartedly that we can be proud to say they will work.)

Among the 8 of them, only Roxas is in the Magic 12 of the latest Pulse Asia survey. Robredo said she too fared low in the survey at the onset of the vice presidential campaigns, and ended up winning.

With that, there is an apparent effort on the opposition’s part to be more relatable and bring the campaign closer to the masses. For example, Hilbay is banking on his rags-to-riches story to boost his bid, Diokno is bannering the brand “attorney ng mga naaapi” (lawyer for the oppressed), and the Wharton economist Roxas is showcasing his famous vlogs featuring the ordinary Juans.

This is all in a bid to overcome the so-called “dilawan” curse of 2016 – which landed their standard-bearer a poor second to the populist Davao mayor – and see if they can beat the Duterte magic this time. – Rappler.com