Political ads of top spenders worth more than their declared wealth 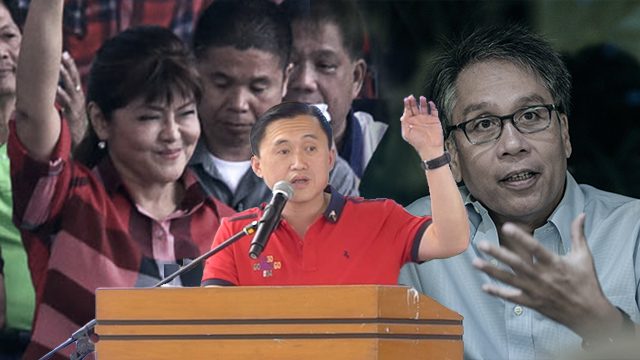 Facebook Twitter Copy URL
Copied
Former special assistant to the President Bong Go spends a whopping P422 million for his senatorial bid. The mystery? His net worth as of 2017 is only P12.85 million.

PCIJ compared each candidates’ net worth, as declared in their Statement of Assets, Liabilities and Net Worth (SALN), to the ad placement data of Nielsen Media.

His expenses gave him at least 1,016 ad spots or 29,940 seconds of airtime exposure. Moreover, nearly 1 in every 3 ads that aired on TV channels last January featured Go.

“Put another way, he bought political ads 32.9 times in value compared to his total personal wealth. Minus all that he owns, PhP409.6 million was the unfunded balance of his ad buys that Go might have paid using money from either public or private sources,” the PCIJ said.)

The 4th placer among the big ad buyers was Harry Roque. He quit the Senate race last February 1 reportedly for health reasons.

Roque spent a total of P174 million for ads or P75.1 million more than his declared net worth of P98.87 million.

HNP-PDP-LABAN spent a total of P1.32 billion in the last 13 months.

The oppositon Otso-Direcho, led by the Liberal Party, had no ads at all in 2018 and bought only TV ad spots last January 2019. (READ: Can Otso Diretso do a repeat of Robredo’s 2016 victory?)

The slate spent a total of P132 million for the spots.

By their latest available SALN, Roxas and Aquino are also in deficit spending, in terms of their pre-campaign ad buys.

In his 2014 SALN, Roxas declared a net worth of P202 million, which means he splurged on ads 198% more than all that he declared he owns.

Alejano, Tolentino, and re-electionists Poe, Ejercito, and Pimentel have all spent more on pre-campaign ads than the net worth they declared in their latest SALNs.

Candidates of Hugpong ng Pagbabago-PDP-LABAN and Duterte had a combined adspend of P1.32 B in the last 13 months. Nearly 1/3 of this or P422M for Bong Go ads; another P413M for Imee Marcos ads https://t.co/scwgz57AGw @2019pollwatch pic.twitter.com/L188XrxjEC

“The fact that the net worth of these candidates could not support the costs of [their] adspend necessarily gives rise to the presumption that either the candidate has hidden wealth or that these were donated to the candidate while in public office,” Lim said.

Lim added that under the revised penal code, it is a criminal offense to receive gifts by reason of their office and is considered as indirect bribery.

Moreover, under election laws, expenses before the official campaign period cannot be counted as campaign expenses as candidacies of politicians were not yet official.

However, the PCIJ said candidates may still be penalized under anti-graft and anti-corruption laws. – Rappler.com