Robredo asks Bicolanos: Do for Otso Diretso what you did for me in 2016 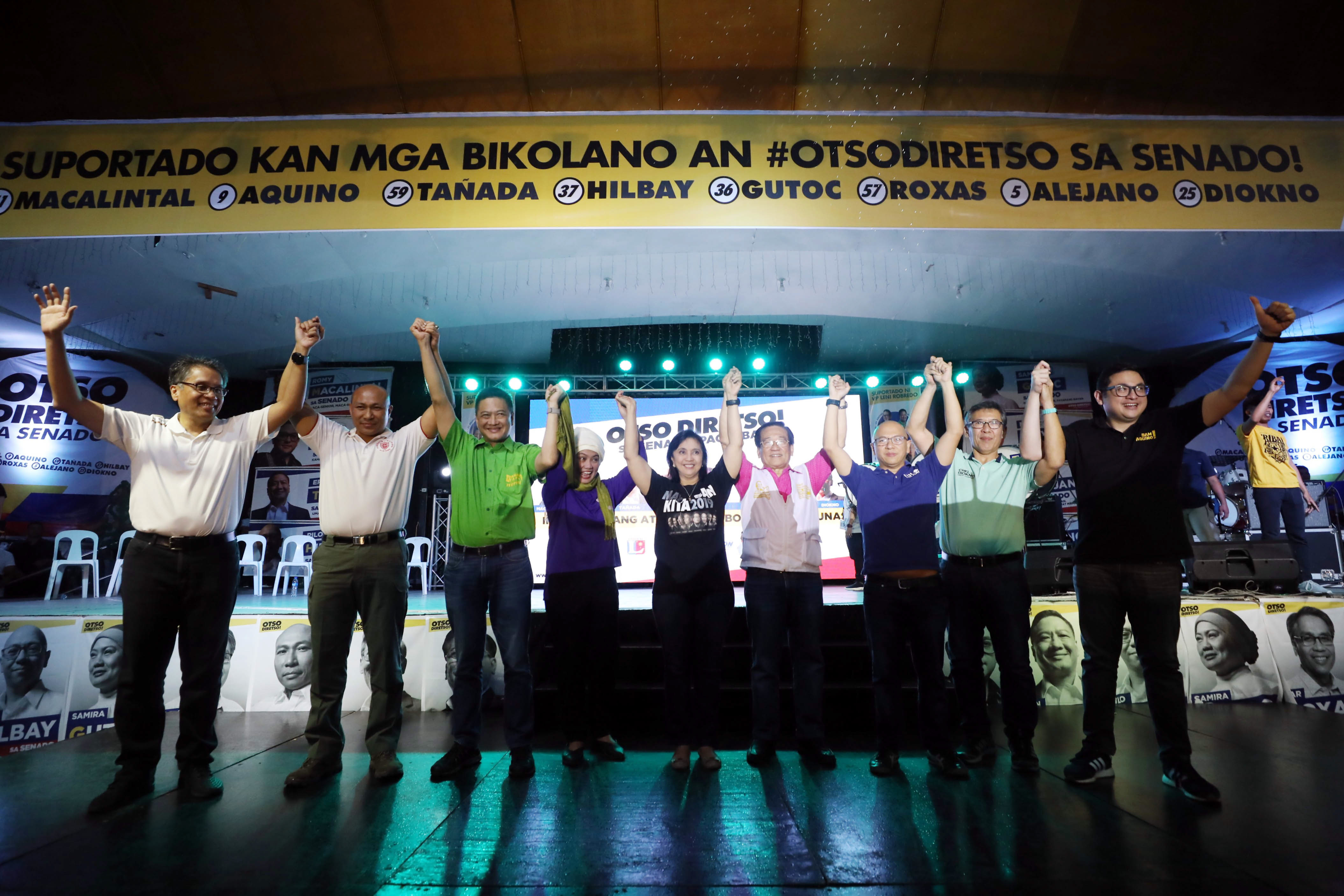 But the thousands who gathered at Plaza Quezon in Naga City for the slate’s grand proclamation rally stayed put. The city, after all, is the bailiwick of the Vice President.

Robredo urged her fellow Bicolanos to help her campaign for Otso Diretso, most of whom are lagging behind in preelection surveys. (READ: Otso Diretso bets to Iriganons: ‘Our fight is also De Lima’s fight’)

The Vice President said that even if the Otso Diretso bets are mostly unknown, she can vouch for their track records. (READ: Otso Diretso slate offers 8-point platform)

(I’m presenting the 8 to you. I’m not just asking you to vote for them. But what I’m asking for is, help me campaign for them.)

(You know I wouldn’t present them to you if I didn’t believe in them.)

She recalled her own come-from-behind victory in the 2016 vice presidential race. Robredo said she owes part of her electoral win to her home province Camarines Sur, where she edged out her opponents with 664,190 votes.

In 2016, the tandem of Robredo and Liberal Party standard-bearer Mar Roxas – now an Otso Diretso senatorial bet – was victorious in Camarines Sur. Like Robredo, Roxas beat his opponents then with 305,670 votes.

Robredo hopes Bicolanos would repeat the same thing for Otso Diretso in May. (READ: Can Otso Diretso do a repeat of Robredo’s 2016 victory?)

While Robredo secured the vice presidency, Roxas had to settle for second place to then-Davao City mayor and now President Rodrigo Duterte. (READ: Roxas on Senate bid: ‘I’m not here to redo 2016’) 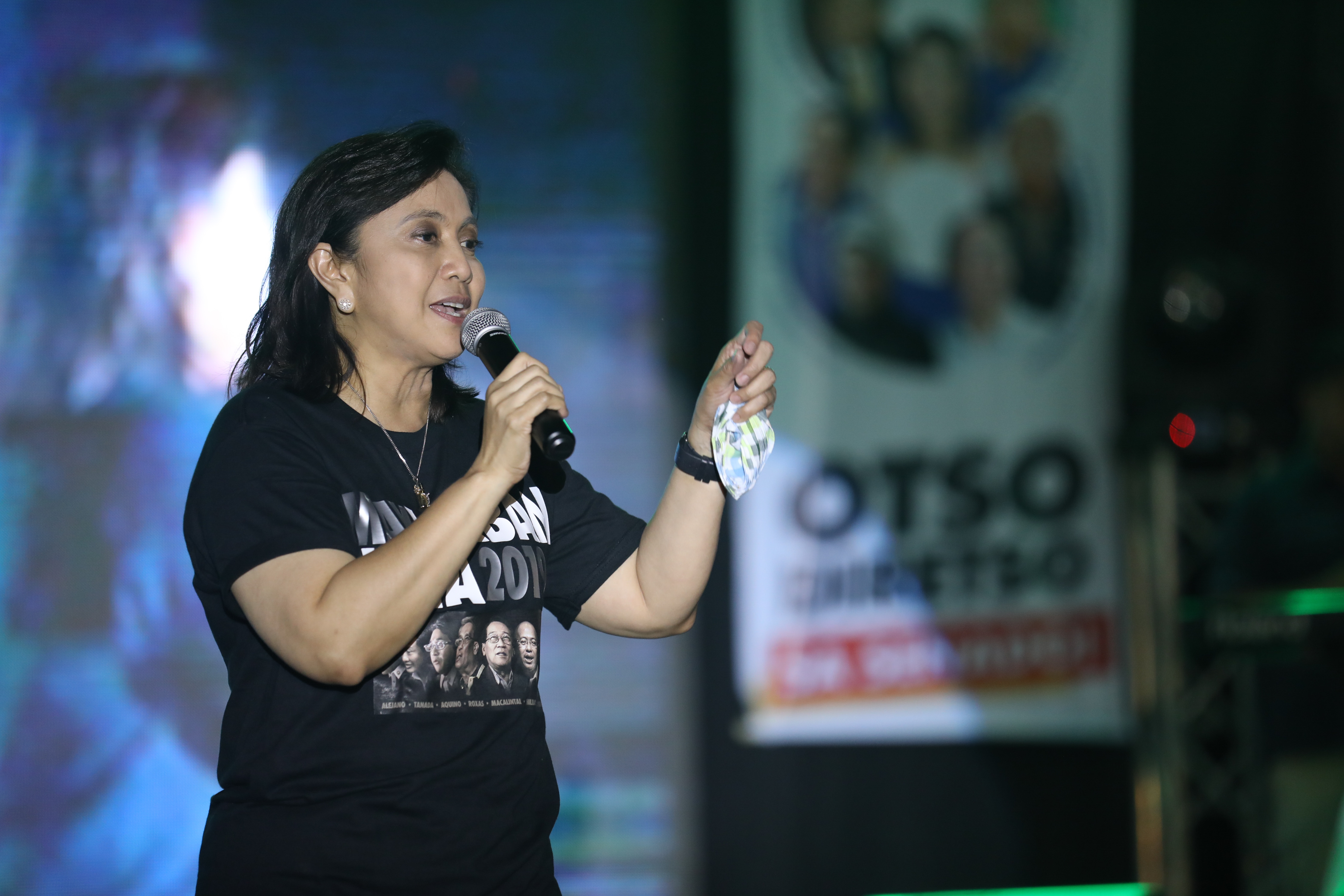 In her speech, Robredo said Roxas has become a “second father” to her 3 daughters after the tragic death of her husband, the late interior secretary Jesse Robredo, in a plane crash in 2012.

She shared that Roxas even took the Robredo siblings to a concert they wanted to watch before.

(You know that Sec Mar and Sec Jesse were good friends. When Jess died, Sec Mar would always check up on my children.)

The Vice President then said Naga has much love to offer to Aquino, who was her campaign manager in the 2016 polls.

(I know that you also love Senator Bam Aquino. This is not just because he goes here often…. But when I ended up running in 2016, Senator Bam was the one I victimized to be my campaign manager.)

Robredo also spoke fondly of Macalintal, who is her lead legal counsel in the electoral protest filed against her by defeated vice presidential bet Ferdinand “Bongbong” Marcos Jr.

(When Romy Mac gets interviewed, my province mates’ worries about my case are eased.)

She then gave quick praises for the remaining members of the slate.

“Solid ang paninindigan (A man of solid principles)” was how Robredo described Tañada.

As for Hilbay, Robredo said his rags-to-riches story as a Tondo boy who became solicitor general is “napaka-inspiring (very inspiring).”

As for Gutoc, Robredo said the mother from war-torn Marawi City has a lot of kababayans (town mates) in Naga, which welcomed those displaced by the Marawi siege.

Robredo endorsed Diokno last and took a swipe against the sister of Bongbong, Ilocos Norte Governor Imee Marcos, with whom Diokno faced off in GMA News’ recent senatorial debate.

(Did you watch the debate? He is such an idol!… The person he had a one-on-one with wasn’t even able to clap back at him. I won’t say who she is.) – Rappler.com