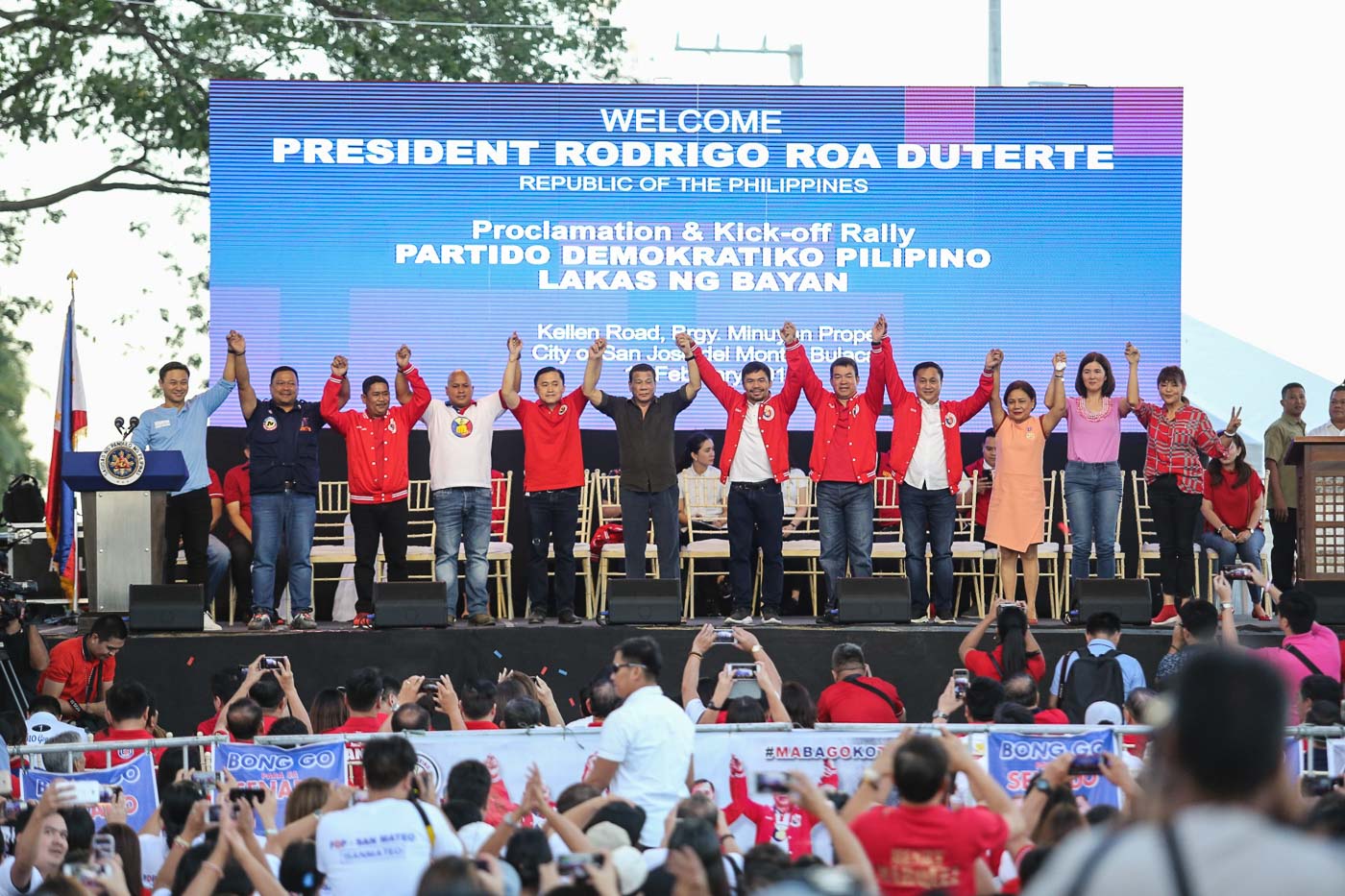 “‘Pag natalo itong mga kandidato ko, balikan ko kayo (If my candidates lose, I’ll get back at you),” Duterte jokingly told the audience.

The others are guest candidates, including:

Former senator Jinggoy Estrada, whom Duterte recently endorsed, was not at the rally. His name was not mentioned by the President either. (READ: Duterte’s chosen ones: Who will benefit most from the President’s endorsement?)

Asked about Estrada, Duterte said he endorsed the former senator because he was at the same event.

“Nandoon siya eh, alang-alang naman na hindi ko siya, even for just one single day, sabihan mo ang kandidato mo trese lahat. What is that to a friend. We know that he has suffered, we know that he was in prison,” Duterte told reporters in an ambush interview.

(He was there, I had to, even for just one single day, say that I have 13 candidates. What is that to a friend. We know that he has suffered, we know that he was in prison.)

Duterte also said that he will only be supporting the 11 candidates present at Thursday’s proclamation rally.

“Yes, because I have to be true to myself. Kung ano ‘yung nasabi ko dito, ‘yun ang suportahan ko (I will support the candidates who were here),” he said.

Estrada, in response, said he respects the President’s statement and vowed to continue supporting his administration.

Party insiders earlier told Rappler that Duterte’s personal slate would be named “Du It Pilipinas,” but there is no official announcement to date.

Of the 11 names, 10 are being endorsed by Hugpong ng Pagbabago, the party of presidential daughter and Davao City Mayor Sara Duterte Carpio.

Only Aguilar is not part of HNP. Aguilar is a member of the so-called “rogue” faction of PDP-Laban.

Ron Munsayac, public information chief of the party, said they chose to hold the event in Bulacan because the province “has one of the strongest and hardworking party councils.”

It was Robes who earlier filed a bill seeking to declare March 28, Duterte’s birthday, a national special working holiday.

The ruling party’s opening salvo was attended by more than 10,000 people.

Bulacan has nearly 1.9 million registered voters in 2019. In the 2016 presidential polls, Duterte won in the province with a little over 500,000 votes. – Rappler.com