On his birthday, Gatchalian endorses 6 out of 7 reelectionist senators

Apr 6, 2019 11:45 PM PHT
Aika Rey
Facebook Twitter Copy URL
Copied
Senator Sherwin Gatchalian says he is endorsing the bid of his friends in Senate, whom he fully believes will serve 'with integrity' 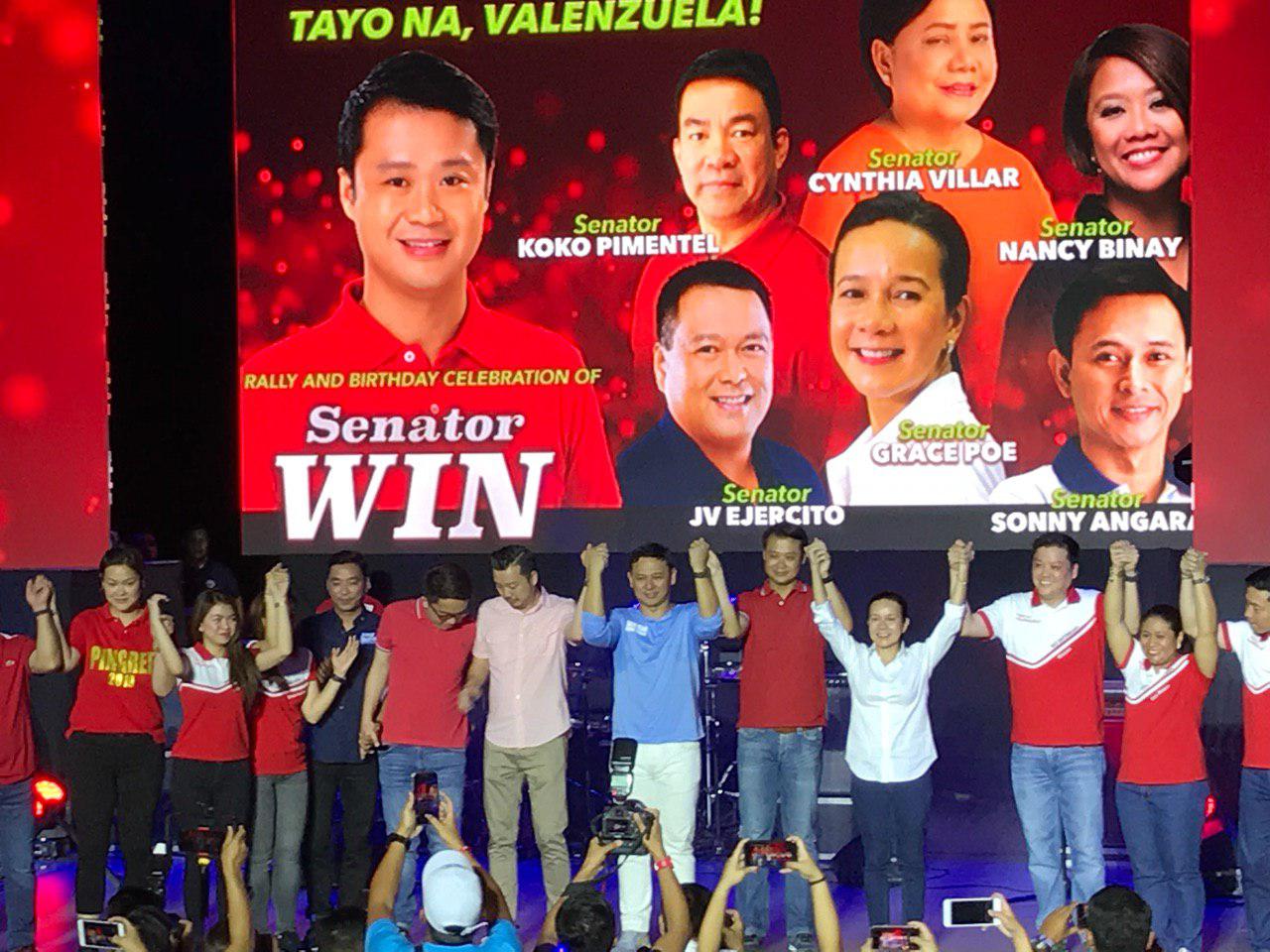 MANILA, Philippines –  Senator Sherwin Gatchalian celebrated his 45th birthday on Saturday, April 6, by endorsing the bid of reelectionist senators to his home city, Valenzuela, saying that he fully believed in their capability to serve Filipinos well.

Of the 7 reelectionists, only minority Senator Paolo Benigno Aquino IV was not endorsed by Gatchalian at the rally.

(It’s really fitting to hold my birthday celebration and political rally to introduce our friends. I’m introducing my personal friends whom I happened to work with. We fully believe that they will serve the people. Most of all, they have integrity.)

Apart from the reelectionist senators, Gatchalian also said Saturday that he was endorsing the campaign of actor and former senator Lito Lapid, because they both belonged to the Nationalist People’s Coalition.

Gatchalian said that his birthday wish this year is for Filipinos to vote for the “right” leaders during the elections.

(I wish that our countrymen will examine well who they will vote for, especially for local [leaders], because it has a direct impact on their lives.)

When Gatchalian introduced Angara during the rally, he referred to him as his “seatmate.”

The “seatmate bloc” is composed of Gatchalian, Ejercito, Angara, as well as Senator Juan Miguel Zubiri and Senator Joel Villanueva.

They later on included Binay, Villar, Senator Loren Legarda, and Senator Richard Gordon, in what apparead to be a force inside the Senate halls. (READ: Senate gets highest satisfaction rating in nearly 7 years)

Asked whether Gatchalian’s endorsement of reelectionist senators would somehow “preserve” that force in the 18th Congress, he said: “Pinapakilala natin sa ating mga kababayan dito kung sino yung makakatulong sa ating bansa at also makakatulong sa Valenzuela.” (We were merely introducing to our constituents who will be able to help our country, and Valenzuela too.)

Meanwhile, Pimentel in his speech reiterated his support for the bids of other reelectionist senators as well, looking back during his time as Senate President.

(One senator alone cannot pass laws. We need to work together. Who helped me during my time as Senate President to pass laws for the promises of President Duterte to happen? It’s the reelectionist senators.) – Rappler.com