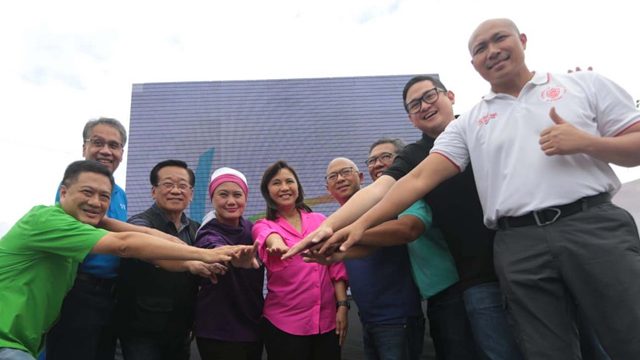 MANILA, Philippines (UPDATED) – All roads will lead to Quezon City for Otso Diretso as the opposition senatorial slate is set to hold its miting de avance at the University of the Philippines (UP) Diliman campus on Wednesday, May 8.

Senator Francis Pangilinan, campaign manager of Otso Diretso, told Rappler that they chose to hold the miting de avance at UP as it is a “bastion of freedom and democracy.” He added that the National Capital Region, where the university is found, is the “nation’s media center.”

“Both have been playing key roles in helping run the national campaign,” said Pangilinan.

All of the Otso Diretso bets were winners in various mock polls conducted by different UP campuses nationwide in the past weeks. (READ: Who are winning in campus mock senatorial polls?)

The LP-led opposition coalition will be in full force for Otso Diretso. Key opposition leaders will be attending the event, including Vice President Leni Robredo, who is also LP chairperson; former president Benigno Aquino III, who is LP chairman emeritus; and opposition Senators Antonio Trillanes IV and Risa Hontiveros.

A thanksgiving Mass will first be held at the UP Chapel before the Otso Diretso candidates and their supporters will proceed to the UP Sunken Garden for the main event.

Called “ThisIs8!”, the miting de avance is also being branded as a thanksgiving concert for Otso Diretso’s thousands of volunteers, many of whom did door-to-door campaigning and spent their own money to print flyers and posters for the slate.

Otso Diretso, however, does not want to call the event a miting de avance despite it being the final pre-election gathering the candidates and their allies from the opposition coalition.

It’s rare for Otso Diretso’s campaign events to feature performances, given the slate’s limited campaign funds and the few politicians willing to endorse them publicly. This has forced the senatorial lineup to turn to a volunteer-driven campaign.

In the Pulse Asia survey conducted in April, only Aquino made it to the “Magic 12” or the so-called winners’ circle. But the Otso Diretso bets are unfazed, banking on the support of their volunteers to propel them to the Senate. (READ: Will it be enough? Otso Diretso turns to volunteers to boost struggling campaign) – Rappler.com