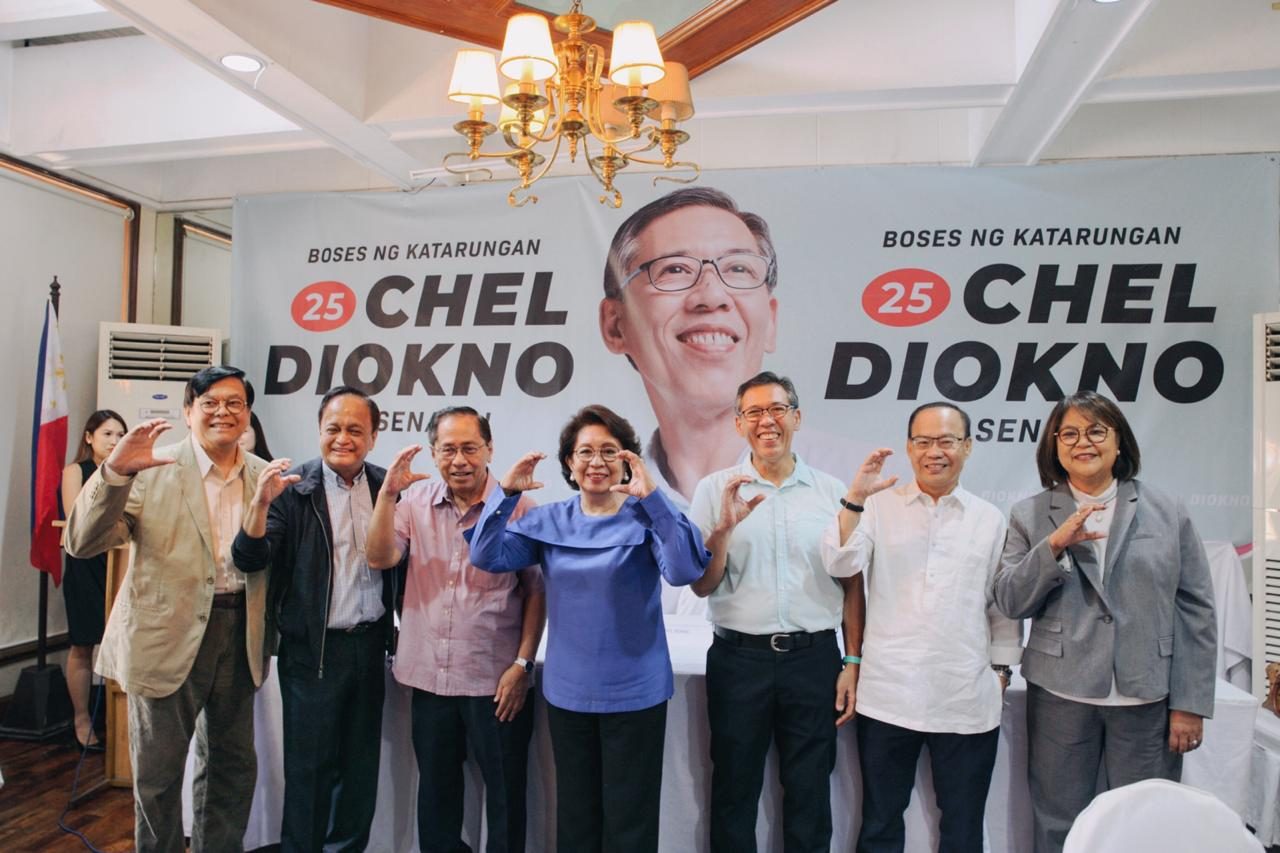 Facebook Twitter Copy URL
Copied
'We have a wonderful guy here, who can really serve our country more than many of our candidates who may be popular because they're exposed to media,' says former SC justice Roberto Abad

MANILA, Philippines – Opposition senatorial bet Chel Diokno, a veteran human rights lawyer, got the endorsement of former justices of the Supreme Court (SC) and ombudsmen as the campaign draws to a close.

Former SC justices Antonio Nachura and Roberto Abad and former ombudsmen Conchita Carpio Morales and Simeon Marcelo threw their support behind Diokno in a news conference on Thursday, May 9.

Nachura said Diokno showed promise for his work as a member of the prosecution of the Joseph Estrada impeachment trial over a decade ago.

“Noong nalaman kong kakandidato si Chel (When I found out Chel would run for senator), I enlisted myself as a volunteer for him because of his passion for justice and his passion for quality education,” Nachura said. (READ: Rene Saguisag endorses Diokno, the ‘voice of human rights’ in Senate)

Nachura, who served as SC justice under the Gloria Arroyo administration, said: “Pagkakataon ko nang makapagbayad kahit kaunti para sa nagawa ni Chel sa ating lahat.” (This is my chance to repay him for what he has done for all of us.)

Diokno heads the 45-year-old Free Legal Assistance Group, which has handled clients such as kin of those who died in the 1987 MV Doña Paz tragedy, witnesses in the kidnapping case against retired army major general Jovito Palparan, and most recently, victims of drug war killings, indigenous groups against martial law in Mindanao, fishermen against commercial fishing, and fishermen against the neglect of the West Philippine Sea.

Diokno scored small wins recently, when the SC compelled the Duterte administration to publicly release tens of thousands of drug war documents, and when the High Court issued a writ of kalikasan for the fishermen who complained against government neglect in Spratly territories.

Diokno is also the founding dean of the De La Salle University College of Law. (PROFILE: Chel Diokno on running for senator: ‘Fight the fear’)

“He worked with me, when the Supreme Court invited him to help us in the revision of the rules of civil procedure and he did fine work in his assignment,” said Abad, whose first work out of law school was for Diokno’s father, former senator Jose W. Diokno.

“We have a wonderful guy here, who can really serve our country more than many of our candidates who may be popular because they’re exposed to media,” said Abad.

Marcelo told reporters he has long promised not to be involved in politics after his term as ombudsman, but that supporting Diokno in his campaign was a chance he could not pass up.

(He is well known as a lawyer who defends human rights of poor and oppressed Filipinos.)

Morales, who has been shying away from political statements since retiring as ombudsman in 2018, did not speak but told reporters she supports Diokno.

Before the press conference, Morales said that while Diokno’s candidacy may be an uphill battle, “everything is possible.”

(Chel loves the law most of all. But more than the law, what he loves is justice.) – Rappler.com