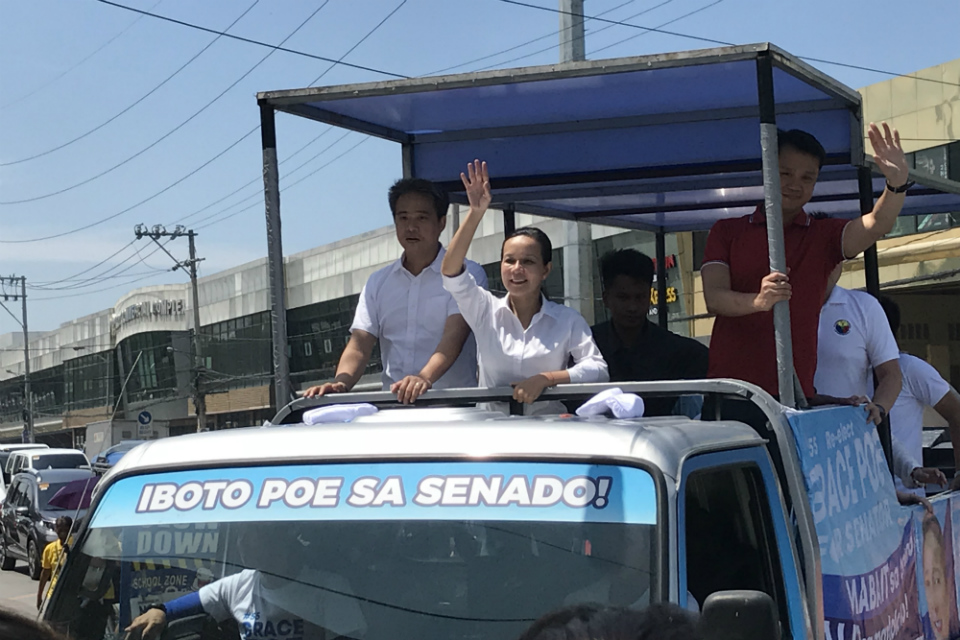 BULACAN, Philippines – With only days to go until election day, reelectionist Senator Grace Poe on Thursday, May 9, stressed the importance of voting for candidates who would ensure the composition of an “independent” Senate.

Poe, who has consistently topped pre-election surveys on Senate bets, made the statement in a campaign sortie in this province, where she explained to voters why the Senate should not be dominated by administration candidates.

(It’s important to be an independent because we don’t want a puppet Senate. We want a Senate that will defend our needs, [and not just be based] on politics.)

Poe had been endorsed by progressive group Makabayang Koalisyon ng Mamamayan (Makabayan), along with other Otso Diretso and Labor Win candidates, with the aim of having an independent Senate. (READ: [OPINION] Will the next Senate be independent?)

During her Bulacan visit, Poe was joined by Senators Sherwin Gatchalian and Joel Villanueva, a Bulakenyo, whom she said “took pity” on her.

Aside from Poe, Gatchalian had endorsed 6 other reelectionist senators.

(In the upcoming May 13 elections, the first thing that we will do is to make Senator Grace Poe number 1 in Plaridel and in the province of Bulacan.)

Villanueva, who got the second most number of votes in the province during the 2016 Senate race, vouched for Poe as a “competent and smart” legislator.

(I want to emphasize that we have an opportunity to elect not only a competent leader, not only one who’s smart and brave one, but also a very kind candidate.)

Poe topped the Senate race in her first bid for elective office in 2013 with a record-breaking 20.15 million votes.

She ran for president in 2016 but placed 3rd overall in the race won by Rodrigo Duterte. In Bulacan, Poe came in second in the 2016 presidential elections.

Bulacan is the 6th most vote-rich province in the country with a total of 1.86 million voters for 2019.

Bulacan voters comprise about a third of the 6.83 million registered voters in Central Luzon. (READ: Vote-rich regions, provinces in the 2019 Philippine elections) – Rappler.com