Facebook Twitter Copy URL
Copied
In the town of Moises Padilla, intense political rivalry and the presence of communist rebels make for a bloody campaign

NEGROS OCCIDENTAL, Philippines – On March 8, President Rodrigo Duterte descended on the obscure town of Moises Padilla in Negros Occidental, along with his military and police generals, to stop the violence in what had been a bloody campaign here.

Two reelectionist councilors and a brother of a mayoral candidate had been killed in brazen daytime ambush attacks since April. Fear had gripped the small town of 23,000 voters.

The Philippines has seen the worst cases of election violence and continues to grapple with the problem. On Monday, May 13, the town is among the areas the Commission on Elections (Comelec) and the security sector will watch very closely to make sure that polls will proceed without further bloodshed. The Comelec has placed Moises Padilla under its control, citing intense political rivalry and serious armed threat posed by the communist New People’s Army (NPA) and other lawless elements. The status grants the poll body direct supervision over all national and local officials, as well as the military and the police, in the area .

Grieving mayoral candidate Ella Garcia Yulo, currently the vice mayor, said the Comelec actions were too late. There had been calls to put the town under Comelec control after the March 31 murder of reelectionist Councilor Jolomar Hilario in front of his family. An NPA spokesperson admitted killing the councilor.

Additional security forces were deployed to Moises Padilla after Hilario’s death, but they weren’t enough to stop the ambush that targeted Yulo’s campaign convoy 3 weeks later.

She survived, but her brother Mark Garcia, former Moises Padilla Liga ng mga Barangay president, and nephew Councilor Michael Garcia were killed. The vehicle carrying the two victims reportedly blocked the gunmen so that Yulo and the others could take cover in the nearby houses.

Yulo believes the deaths could have been avoided had Comelec immediately put the town under its control.

Yulo accused her rival in the mayoral race – reelectionist Mayor Magdaleno Peña – of masterminding the attack. She believes she was the target of the ambush because Peña knows he will lose in the polls.

Peña vehemently denied the allegations. He accused the Garcias of killing each other.

They’re all related by blood. Peña is Yulo’s uncle and the two were running mates in the 2016 polls.

Pressure mounted on Peña when two neighboring mayors also tagged him to be responsible for the attack.

“We have to make a stand. If we want to have a good government then we choose the good people. Peaceful election lies in the hand of the electorate,” said Mangilimutan, a former police officer.

During his visit, Duterte himself issued a public warning against Peña. “Allow everybody to vote freely. This is a democracy. This is an exercise of the right of the people to choose their leader,” Duterte said, addressing Peña in his speech.

The President said he personally threatened Peña: “I frankly told him, I told him, if you create so much problems for everybody, you might find yourself the ultimate solution.” On the day of Duterte’s visit, it appeared Peña tried to deflect the President’s attention from him.

Before the President arrived in the town, Comelec pulled down a welcome tarpaulin hanging at the gate of the Moises Padilla Elementary School, where the command conference was held. It made “derogatory” claims against Negros Occidental Governor Alredo Marañon Jr.

The tarpaulin read: “To our Beloved President Hon. Rodrigo Roa Duterte, welcome to Moises Padilla. The town where you came in second (40% of the votes) during the last 2016 elections, as Mayor Magsie Peña cannot campaign even for a day because Gov. Marañon ordered him ambushed by the provincial commander (Señoron) and SAF commander (Baquiran). The second municipality (next to Pulupandan) in the province of Negros Occidental with all 15 barangays declared as drug-cleared/drug-free by the DILG, PDEA, DOH and PNP.”

Capiz provincial election officer Jessie Suarez, head of the Comelec task force in Moises Padilla, said the poll body immediately took down the tarpaulin due to its “derogatory” remark.

Marañon also issued a statement, saying Peña was obviously in a “state of panic pending his imminent rejection by the people of the town that he had terrorized the last 3 years.”

The outgoing governor called the allegations against him black propaganda. “His allegations are certainly fabricated lies and can easily be debunked,” he said. 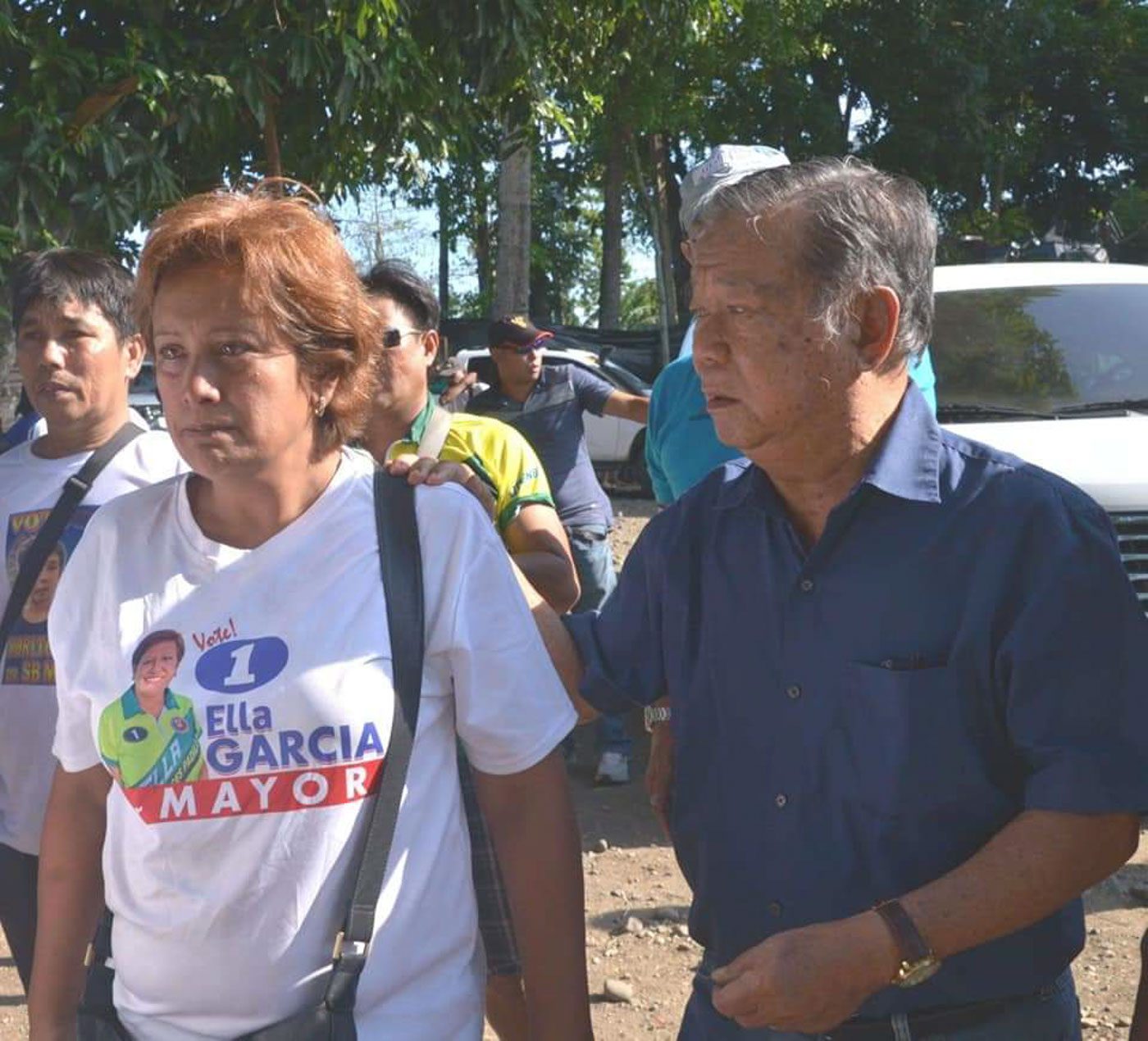 Duterte also assured Yulo that justice would be served. Charges have been filed before the prosecutor’s office against 30 suspects.

Among the suspects is another Moises Padilla reelectionist councilor, Agustin Grande III. Marijo Garcia, the widow of Mark Garcia, said she saw Grande talking to one of the assailants before the convoy was attacked.

She said she thought her husband was just behind her when they took cover from the attack. “I was expecting that he was following me. When we got out of the house (where they hid), I saw him down on the pavement, head splattered,” she said.

She remembered her husband’s last words to her. “Ma, dalagan. Kay masunod ko (Ma, run. I’ll be right behind).”

He also left behind two children. “I pray to God that He will give me strength,” said the widow.

Grande, who claimed he is innocent, was ordered released due to insufficient evidence. He has since offered P2.5 million in reward money for information on the killers.

Grande’s reward offer is on top of the P2 million reward offered by Marañon and Representative Alfredo Benitez for the arrest of the perpetrators.

The probe is complicated by the implication of a member of the Barangay Peacekeeping Action Team (BPAT), a force multiplier unit of the police.

The prosecutor upheld the arrest warrant against BPAT member Joe Cezar. He was arrested inside the Food Production Processing building in Moises Padilla, where a witness claimed he saw the assailants came from more than an hour before the ambush. They were carrying rifle bags.

Yulo has been accused of being “in bed with the New People’s Army,” along with Malabor and Mangilimutan, the two mayors who supported her allegations against Peña.

The police filed charges of illegal possession of firearms and explosives against Yulo and her husband after guns and grenades were reportedly found inside their vehicle when it was inspected at a checkpoint in December 2017.

Yulo said the guns and grenades were planted evidence. She dismissed the charges as political harassment upon the supposed orders of Peña. The couple posted bail.

Interior Secretary Eduardo Año, a former military chief whose career focused on anti-communist operations, has promised an impartial investigation that will continue even after the May 13 elections.

Año has also called on the residents to help provide information on the assailants. – Rappler.com