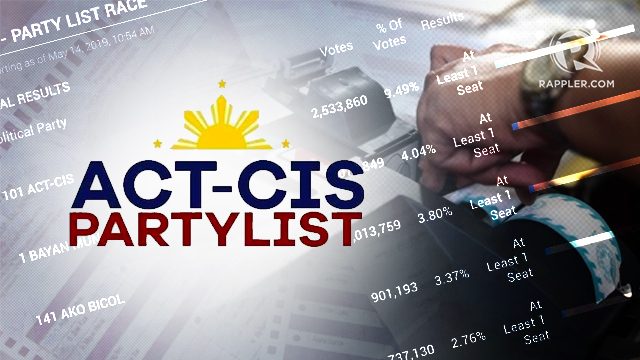 MANILA, Philippines – Topnotcher party-list group Anti-Crime and Terrorism Community Involvement and Support (ACT-CIS) won in Metro Manila and 5 other regions, based on partial, unofficial vote counts as of 9:02 am on Tuesday, May 14.

The vote ACT-CIS got in Metro Manila is already a quarter, or 25.75%, of at least 2,527,668 votes so far nationwide. It is currently leading in the overall party-list race.

The group also topped in the following regions, with its corresponding share of the regional vote:

However, it did not place first in all provinces in these regions, winning only in 10 provinces: Abra, Aurora, Bataan, Tarlac, Cavite, Laguna, Rizal, Oriental Mindoro, Palawan, and Zamboanga del Sur.

ACT-CIS also topped in Nueva Vizcaya and Siquijor, but it only placed second in the region of Cagayan Valley behind LPGMA party, and second in Central Visayas behind Ako Bisaya.

Initial overseas absentee vote (OAV) results from the Asia Pacific and Middle East regions also show ACT-CIS leading there so far, with a combined 33,774 votes or 36.70% of the partial, unofficial OAV votes.

After all party-list votes are counted, groups that got at least 2% of the vote will get one seat each in the House of Representatives, with the first nominees of each taking those seats. (READ: PH party list: Making it more representative)

The rest of at least 59 seats for party-list representation in Congress will be distributed among top vote-getters through a formula set by law. – Rappler.com