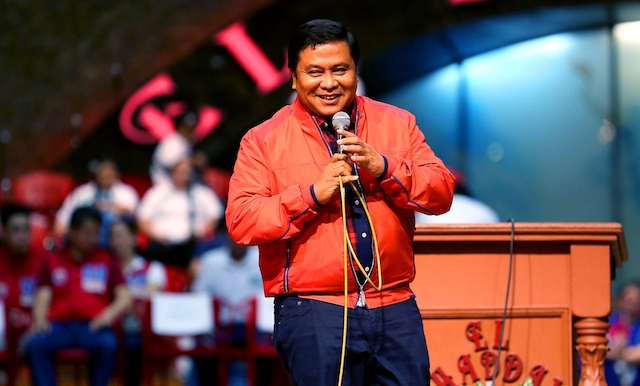 MANILA, Philippines – Jinggoy Estrada conceded defeat on Thursday night, May 16, and urged winning senators to ensure that they help maintain the independence of the Senate.

In a Facebook post on Thursday night, Estrada cited the partial, unofficial count of the Commission on Elections  (Comelec) where he was at 15th place or outside the winners’ circle.

(While I was not fortunate to get into the Magic 12, based on the unofficial count of the Comelec and the VCMs, I am grateful to all of you for your support, especially the Filipino masses who never left my side.)

Estrada congratulated all the presumptive senators, and had a special message to the reelectionist and returning senators in the Magic 12 – Senators Sonny Angara, Koko Pimentel, Grace Poe, Cynthia Villar, Pia Cayetano, Lito Lapid, and Nancy Binay.

“I truly hope that all of you maintain the independence of the Senate, an institution where our people look up to,” he said.

In his message to Binay, Estrada made an indirect jab at his half-brother, JV Ejercito, who was at 13th place, based on the partial unofficial count. Binay was at 12th place, and had claimed victory, citing her comfortable lead over Ejercito.

“Kay Sen Nancy, alam ko marami ka pang magagawa sa Senado na makakatulong sa ating mga kababayang mahihirap (To Sen Nancy, I know that you can do even more in the Senate that would help our poor countrymen). Keep it up! You deserve to keep the 12th spot because you have a very big heart for the poor and you are the BETTER person among others. Congratulations, my friend,” he said.

He wished success for Revilla, with whom he had spent several years detained at the Philippine National Police Custodial Center over plunder charges in connection with the pork barrel scam. Estrada is out on bail, while Revilla was acquitted but was ordered to pay back  the plundered P124.5 million.

To my BFF and fellow inmate Sen Bong Revilla, while we spent a lot of time together and will now be apart, I’ll pray for your success in the Senate and continue your fight for the truth. I love you, my friend!)

“Malaki ang aking paniniwala na magiging maayos at productive ang senado dahil subok na ang inyong kasipagan at determinasyon na manilbihan sa taong bayan (I have a lot of faith that the Senate will be productive because of your tested hard work and determination to serve the people),” he said.

Estrada also thanked the Iglesia ni Cristo (INC) leadership for endorsing him, as well as Sara Duterte for including him in the Hugpong ng Pagbabago senatorial slate.

Despite the coveted INC endorsement, Estrada failed to get into the Magic 12, and even lost in his bailiwick, San Juan City.

Several others from the Estrada clan lost in their bids in the midterm elections, notably the patriarch, reelectionist Manila Mayor Joseph Estrada, who lost to former vice mayor Isko Moreno. (READ: House of Estrada falls in May 2019 polls)

Other senatorial candidates had conceded defeat in the Senate race as well.  – Rappler.com