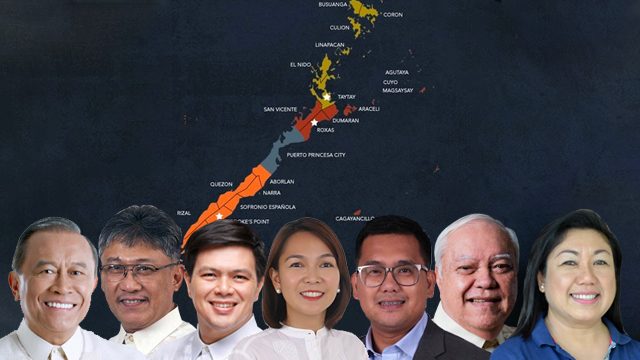 MANILA, Philippines (UPDATED) – Ahead of the planned split of the Philippines’ biggest province, top politicians in Palawan held on to key posts in the May 2019 elections.

In the 5-way gubernatorial race, Governor Jose Alvarez of ruling party PDP-Laban secured a 3rd term, after getting at least 206,794 votes or 59%, based on 99.26% of precincts reporting as of Tuesday, May 21.

In the congressional races, one lawmaker was reelected while the other two were replaced by relatives.

First district Representative Franz Josef George Alvarez of the National Unity Party (NUP) ran unopposed. He will be serving his 3rd and final term in Congress.

The towns of the current 1st legislative district (except Kalayaan) will be split, with 6 going to Palawan del Norte and 8 to Palawan Oriental. Meanwhile, the 2nd and 3rd districts (except Puerto Princesa City) plus Kalayaan town will make up Palawan del Sur.

Puerto Princesa City, as a highly-urbanized city, will not be part of any province, and will have its own legislative district.

Voters in the proposed 3 new provinces will take part in a plebiscite on the second Monday of May in 2020 either to approve or reject the splitting of Palawan. – Rappler.com

*Editor’s Note: We initially reported that 3rd district congressman Gil Acosta Jr was a reelectionist in the 2019 elections. We corrected this to state that he succeeded his father and namesake.