Facebook Twitter Copy URL
Copied
(UPDATED) This is in response to a PCIJ report based on Comelec's own summary report, which showed a 178% voter turnout for Amai Manabilang, Lanao del Sur, in the 2019 elections

MANILA, Philippines (UPDATED) – The Commission on Elections (Comelec) clarified that the voter turnout in one Lanao del Sur town in the 2019 elections is not over 100%, in response to an article based on the poll body’s own summary report.

In a statement on Wednesday, November 27, Comelec spokesperson James Jimenez “registered reservations” about a November 25 report of the Philippine Center for Investigative Journalism (PCIJ) which showed that Amai Manabilang (or Bumbaran) town in Lanao del Sur posted a voter turnout of 178% in the 2019 polls.

PCIJ based this on Comelec’s summary report on voter turnouts in the country as of November 18, 2019, and uploaded on the poll body’s website. The summary report showed that Amai Manabilang had 5,498 registered voters, but 9,807 voters supposedly voted there on May 13.

Jimenez said that based on records from the Comelec Election Records and Statistics Department (ERSD), Amai Manabilang “had a recorded voter turnout of only 5,271 voters, or 95.87% of the town’s 5,498 registered voters.” This is according to the city/municipal certificate of canvass (COC) for the town “duly signed and certified by the city/municipal board of canvassers,” he added.

“These observations about the claims made in the report make it prudent to undertake a thorough review of the source documents and of the conclusions drawn from them,” Jimenez said.

In response, PCIJ executive director Malou Mangahas told Rappler that the data analysis in their article “was sourced from Comelec documents that are even now posted on the Comelec website. The data on the Lanao del Sur town in question are clearly documented [there].”

Comelec’s summary report seems to be not in order itself, at least for the concerned Lanao del Sur towns. It appears that the voter turnout figures for Amai Manabilang and two towns listed before it in the 1st District of Lanao del Sur might have been interchanged. 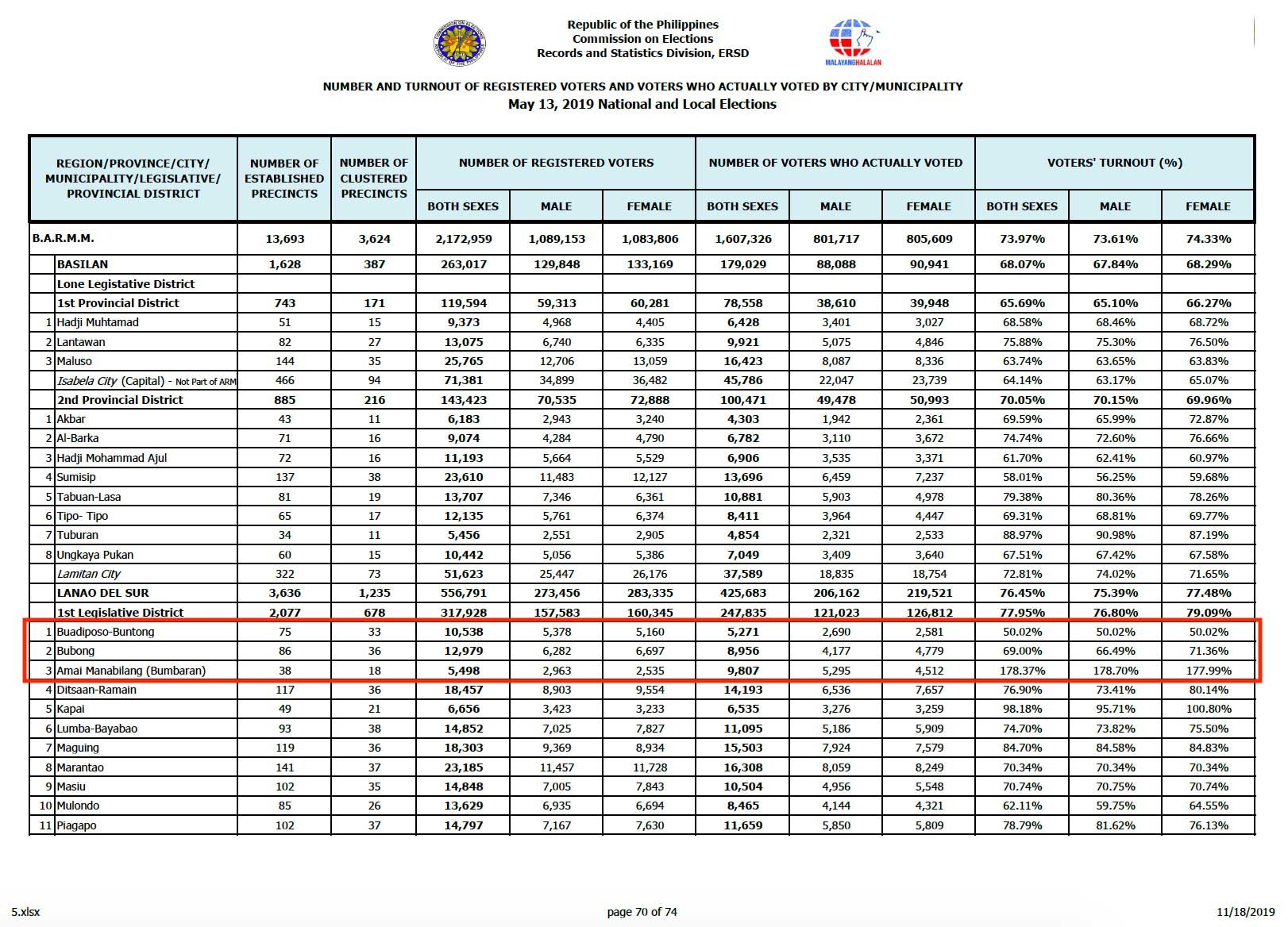 Meanwhile, checking the numbers in the Comelec Central Server data for valid votes in single-winner contests like the mayoral and gubernatorial races (which are similar to voter turnout figures), it was Amai Manabilang with 5,271 valid votes, Buadiposo-Buntong with 8,956 valid votes, and Bubong with 9,807 valid votes. The town listed after Amai Manabilang in Comelec’s summary report, Ditsaan-Ramain, had 14,193 voters who actually voted. This matches the 14,193 valid votes logged in the Comelec central server for Ditsaan-Ramain.

Rappler asked Jimenez about the discrepancies between the figures in Comelec’s summary report on their website and in the city/municipal COCs from Comelec ERSD at least for Amai Manabilang, but he has yet to reply as of this posting. – Rappler.com