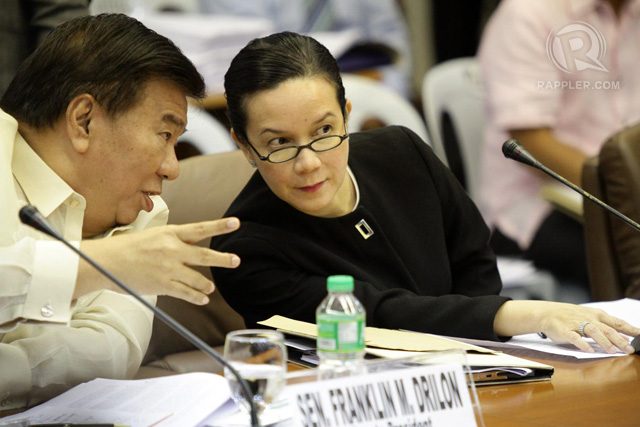 MANILA, Philippines – Senate President Franklin Drilon, vice chairman of the Liberal Party (LP), said on Monday, May 18, the administration party has not sat down to discuss the possibility of fielding an outsider as a presidential candidate.

“We haven’t discussed anything, so as far as I am concerned, we would prefer a member of the party,” Drilon told reporters.

Drilon was asked about LP’s policy on non-members, following pronouncements from President Benigno Aquino III, who is LP chairman, that he is in discussions with Senator Grace Poe on the 2016 elections.

While the President provided no details about his possible offer to Poe, there are LP members who have welcomed her as a potential administration presidential candidate.

In the latest Pulse Asia survey, conducted March 2015, Poe ranked 2nd in the respondents’ choice for president, with a net rating of 14%, next to Binay’s 29%; Roxas was 7th with 4%. (READ ALSO: Even with Aquino endorsement, more prefer Poe than Roxas)

“I would take the position that Mar Roxas should now declare his intention, if he is indeed [running], and I think he is. He should declare now his intention that he would want to present himself as president in 2016,” Drilon said.

Meanwhile, Poe said she has yet to make a final decision on 2016, but running with Roxas or with the LP depends on the ruling party.

“I do not know. They are saying the LP is considering Secretary Roxas as their choice. I don’t want to preempt anyone. It would be arrogant of me to say that I should be president, and he should be vice president. That is still the subject of discussion,” she said.