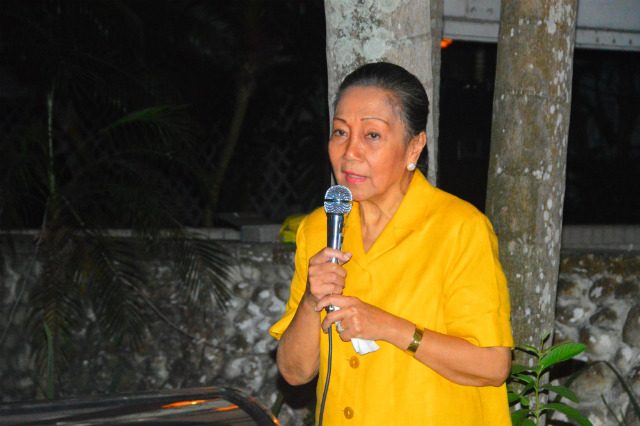 Facebook Twitter Copy URL
Copied
Interior Secretary Mar Roxas says he has yet to speak to Judy Araneta-Roxas, who asked fellow Negrenses to help her son 'get a seat in Malacañang'

LAGUNA, Philippines – Interior Secretary Manuel Roxas II continued to play coy about his 2016 plans, downplaying the reported efforts of his mother to informally launch his presidential campaign in Negros Occidental over the weekend.

In a chance interview with reporters on Monday, June 1, Roxas – the presumed standard-bearer of the Liberal Party (LP) – said Judy Araneta-Roxas was just visiting her hometown of Bogo, and politics was perhaps taken up in the course of casual conversations with family friends.

(The truth is, she’s from Bago. She has a lot of friends there and maybe the 2016 elections or other topics are among the things she talks about – with friends, family. I wasn’t there so I don’t want to make a comment.)

Last Saturday, May 30, the mother of the interior chief hosted a dinner at their ancestral home in Bago City, where she called on other Negrenses to have “no doubt” in helping her son “get a seat in Malacañang.”

“We want someone who has ambition and dream for Negros, which you also want,” she told a crowd of 260 people, which included local officials and businessmen.

Asked if her son was ready for a 2016 run, Araneta-Roxas has the same answer as her son’s. “All the way,” she told reporters.

Roxas – who was in Laguna on Monday to attend the flag ceremony of Philippine National Police (PNP), Bureau of Fire Protection (BFP), and Bureau of Jail Management and Penology (BJMP) personnel based in the province – said he had yet to speak to his mother about the statements she made over the weekend.

Thus far, Roxas has chosen to be cryptic and vague about his 2016 plans. The closest he’s gotten to a declaration was when he told reporters that he was “ready” to continue the “Daang Matuwid (Straight Path),” the Aquino administration’s tagline for its anti-corruption and transparency drive.

Pressed on what would convince him to announce or decide his 2016 plans, Roxas said “the time will come” for doing that. “Ngayon ay nakatutok tayo dito (For now we are focused on the task at hand),” he said.

His party mates at LP, including President Benigno Aquino III, do not seem to be in a rush to pick the party’s anointed presidential candidate. While Aquino previously told reporters that Roxas remains on “top of the list” for possible LP standard-bearers, the President added that he plans to make theannouncement after his last State of the Nation Address in July 2015.

Vague as Roxas may be, he has been going around. Over the past two months, Roxas has met with two personalities considered top contenders for president or vice president.

Roxas met with neophyte senator Grace Poe at least thrice, the second time in the presence of the President himself. In late May, the interior secretary also met with Davao Mayor Rodrigo Duterte – a surprise strong contender in recent nationwide preference polls for 2016.

No announcements have been made from the Roxas, Poe, or Duterte camps, but if the latter two’s actions are to be believed, they may not be keen on being allies with Roxas. Poe, in an interview with reporters, admitted she haddifferences with Roxas.

Duterte, meanwhile, despite thumbing down a rumored run for a national post, released political ads over the weekend which boasted of the good work he has done in Davao.

Both Poe and Duterte are among the top choices in early presidential surveys. Leading the pack in Vice President Jejomar Binay, who has remained on top despite persistent corruption allegations.

Roxas had earlier rejected an “offer” from Binay to run as his vice president, saying he does not ally with those tainted by corruption allegations.

In contrast, Roxas has registered a dismal 4% in early presidential preference polls. – Rappler.com