VP Binay on foundling Poe: I had a harder life 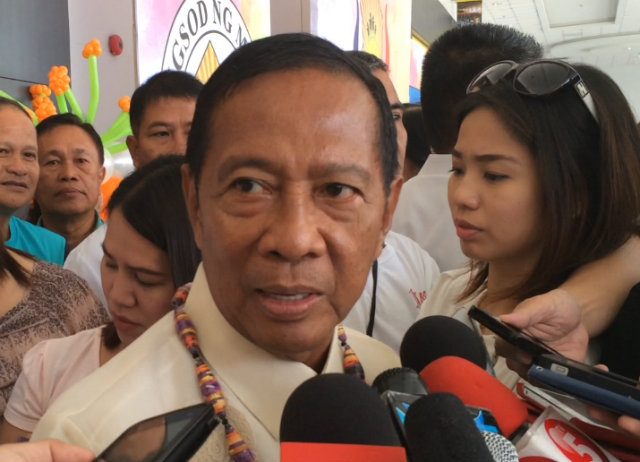 Facebook Twitter Copy URL
Copied
Vice President Jejomar Binay says when he was adopted by his relatives as a young boy, he had to go to the public market and gather hog feed

MANILA, Philippines – As someone who had to be adopted by relatives after being orphaned at a young age, Vice President Jejomar Binay said he would be the last person to insult someone who shared a similar fate.

Binay also said in an interview at the Biliran municipal plaza on Thursday, June 4, that between him and Senator Grace Poe, a foundling who was adopted by actors Susan Roces and the late Fernando Poe Jr, the neophyte lawmaker had it easier.

He made the statement as he refused to be baited by questions on the residency issue raised by his own camp against Poe. A day earlier, his daughter, Makati Representative Abigail Binay, declared on his behalf a unilateral ceasefire on the word war between the Binay and Poe camps. (READ: Binay camp on Grace Poe: ‘It’s her right to run’)

On Poe’s observation that she is being attacked by the Binay-led opposition because of her good standing in nationwide polls on presidential candidates, the Vice President said, “Okay lang (That’s okay).” (READ: Grace Poe to UNA: Why are you so afraid of me?)

Asked if he won’t contest the impression, Binay repeated his statement, and then segued into Poe’s history as a foundling.

(You know, part of Grace’s statement was on her adoption. Would I, Jojo Binay, ridicule people like that? That’s not Jojo Binay. You see, I was also adopted by my uncle. Grace was lucky; she had a better life [following her adoption]. When I was adopted, I had to go to the public market,  gather hog feed. So Jojo Binay is not someone who ridicules the oppressed.)

Binay lived with an uncle in a seedy area known as Kuli-Kuli in Pio del Pilar, Makati. He helped with the household chores and worked his way through high school and college, before obtaining a law degree from the University of the Philippines.

Binay said that he had known about the issue against Poe and that he had even asked Navotas Representative Tobias Tiangco, United National Alliance (UNA) president who had raised the legal question, not to pursue it. (READ: Binay ‘surprised’ by Tiangco’s attack on Poe)

On whether he will raise the citizenship question against Poe if she decides to run against him in 2016, the Vice President said: “Nandiyan na po ‘yan e. Tingnan na lang [paano mangyayari] (It’s already there. Let’s see what happens).”

Binay also said that his search is still on for a vice presidential candidate, but would not say who are among his top picks.

On Tuesday, Tiangco presented a copy of Poe’s certificate of candidacy for the previous mid-term elections. It showed that as of May 13, 2013, she had resided in the country for 6 years and 6 months – “proof” that she would have been a Philippine resident for less than the required minimum 10 years by May 2016.

UNA interim secretary-general JV Bautista had also claimed that Poe is not qualified to run for higher office as a “foundling by definition is stateless.”

Poe said she had been a Philippine resident since 2005.

Binay remains the leading contender for the presidency, based on nationwide polls, despite being houded by corruption allegations. Poe is currently ranked second. – Rappler.com