Jun 21, 2015 2:15 PM PHT
Karlos Manlupig
Facebook Twitter Copy URL
Copied
Several supporters believe that his conservative ratings in recent presidential surveys could have been higher if he had already declared his intent to run for president 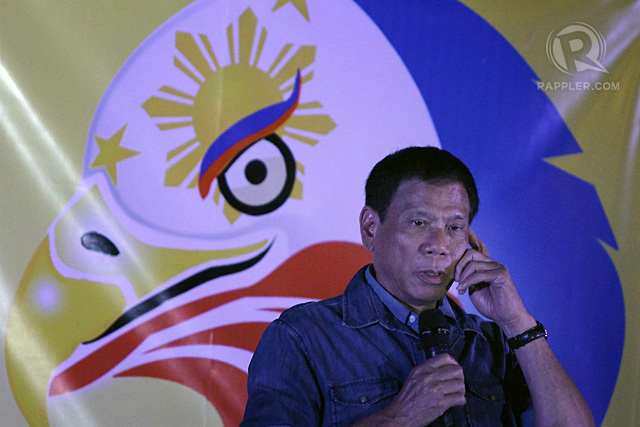 In his TV show Gikan sa Masa, Para sa Masa, Duterte on Sunday, June 21, said he is now keeping an open mind given the appeals from his friends and supporters.

“I will consider the suggestion of my friends and supporters,” Duterte said.

The statement came after his supporters said Duterte should now seriously consider running, especially since his poll numbers have improved. Latest surveys point to him being 3rd among the presidentiables, following top contenders Senator Grace Poe and Vice President Jejomar Binay.

Duterte, however, insists the presidency is “destiny,” which God can only determine.

He added: “I will not close the door… Just whatever we decide on I hope it would be for the best interest of the country.”

Several of his supporters commented that Duterte’s ratings could have been higher if he had declared his intent to run for president.

Former transportation secretary Pantaleon Alvarez said the conservative ratings were due to his repeated statements that he is not running.

“The reluctance of people to openly express support for Rody is due to the fact that he has repeatedly declared he is not running. In fact, the question we always hear is: Is he really running?” Alvarez said.

Former North Cotabato governor Emmanuel Piñol said Duterte is capable of getting the votes of at least 80% of Mindanao, which has the power of at least 13 million voters.

Piñol said even Bukidnon Governor Jose Zubiri had commented that political leaders and players will be persecuted by the people if they will campaign against the tough-talking mayor.

“Any Mindanao political leader who will campaign against Duterte in his area will face a revolt and upheaval from his own people because they see Duterte as their hope of getting the attention of the national government for the first time,” Zubiri said.

His supporters claim that only Duterte has a clear position and plan on issues like the illegal drug trade, corruption, criminality, conflict and the peace processes.

“Besides, Filipinos now would like to experience how it is to live in a safe and secure country, just like the City of Davao, which is now one of the 10 safest cities in the world,” said Zubiri.

Despite his denial about this candidacy, TV and radio ads recently started airing all over the country but Duterte explained that it was planned and funded by businessmen in Manila who are tired of getting targeted and threatened by kidnappers and criminals. – Rappler.com