MANILA, Philippines – Why did Vice President Jejomar Binay resign only now? What triggered it? Why didn’t he personally meet with President Benigno Aquino III? Why the one-sentence resignation letter?

With Binay hurriedly leaving the podium after a 10-minute speech on Wednesday, June 24, his spokespersons and allies were left to answer media questions on his resignation from the Cabinet two days ago.

(You fall in line to get on the Metro Rail Transit system, but then the train stops midway. If you don’t feel the insensitivity of many, I think you don’t understand.)

The former Manila mayor was referring to Binay’s line in his speech where he criticized the “insensitive, crooked, and failed” leadership and services of the Aquino administration.

Binay was part of the Cabinet as housing czar and presidential adviser on overseas Filipino workers (OFW) concerns for 5 years prior to his resignation on Monday. He stays as vice president. 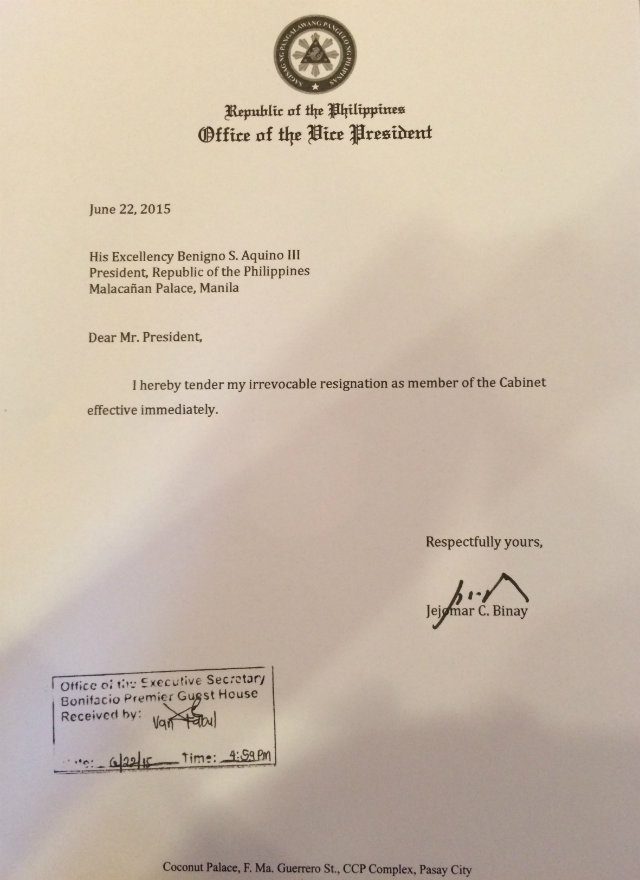 Atienza said that as a full-fledged leader of the opposition United Nationalist Alliance (UNA), Binay will now be the “voice of the persecuted.”

Yet the spokespersons and allies could not address key questions of the media and the public.

Ilagan admitted that only the Vice President can adequately address corruption allegations against him in “the proper time.”

Political analysts and pollsters have said that Binay’s failure to directly confront the accusations contributed to the slide in his popularity in recent polls. Senator Grace Poe overtook Binay as the front-runner in presidential surveys released last week.

(I think our VP will be the one to address that because we, spokespersons, partymates, we know that the VP is smart. He is a lawyer, and he knows proper timing, the proper venue to address issues, the allegations being raised against him and his family.)

Binay is the subject of various government investigations into alleged corruption in Makati, where he was mayor for 21 years. The Ombudsman, the Senate, and the Anti-Money Laundering Council are looking into allegations he pocketed public funds from the allegedly overpriced Makati parking building, and other infrastructure projects in the city.

Ilagan also could not say why Binay only decided to resign now, even after he formed the opposition coalition way back in 2012. The Vice President has been indirectly criticizing the administration even while sitting as a member of the Cabinet.

“I don’t think it’s in the timing. I think it’s a personal reason. I think what’s more important now is that he heads the opposition.”

‘Why didn’t you tell the President?’

Malacañang questioned the timing of Binay’s criticism of government policies and programs.

In his speech, Binay criticized the administration’s stimulus measure, the Disbursement Acceleration Program (DAP), the Priority Development Assistance Fund (PDAF) allocated to lawmakers, the poor services and corruption in the Metro Rail Transit (MRT) system, and what he called the “massacre” of 44 Special Action Force (SAF) members in Mamasapano, Maguindanao in January.

“We note that in the 5 years of service to President Aquino, he has never spoken ill of the governance policies of the President,” said Presidential Spokesperson Edwin Lacierda.

“Still, he has made the unfortunate choice to commence his presidential run with statements that he could have otherwise discussed with the president as a Cabinet member but chose not to,” Lacierda added.

Senator Antonio Trillanes IV, a staunch Binay critic, was unimpressed with the Vice President’s explanation that he resigned from the Cabinet to prepare to offer a “compassionate, effective government.”

“Binay’s speech was an act of desperation, and an attempt to divert attention from the numerous allegations of corruption against him,” Trillanes said.

Lawyer Harry Roque, who is considering running for senator under UNA, said the Vice President’s message will not end with his speech.

Roque said that Binay will back up his rhetoric with actions, but did not specify.

“He mentioned 4 issues: PDAF, DAP, MRT, Mamasapano. We expect the leader of the opposition to take action on these 4 issues, and ask for justice in these 4 issues,” Roque said.

“We can expect that aside from condemning these issues, there will be action in the coming days.”

Binay’s spokespersons said he will now become a “fiscalizer,” and offer “constructive criticism” to the government.

The Vice President is expected to detail his program of government during the launch of his political party, UNA, on July 1. – Rappler.com