Roxas to Binay: Why were you ‘quiet’ for 5 years? 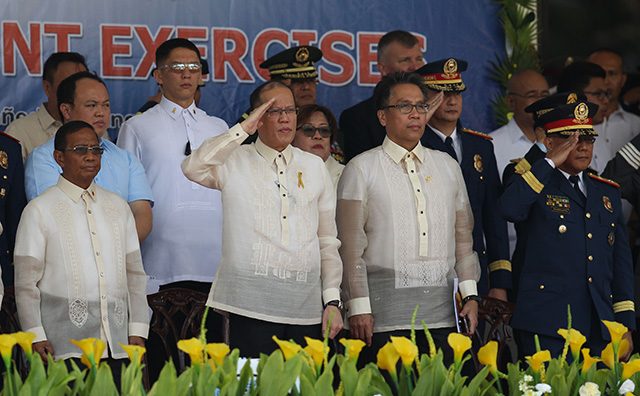 MANILA, Philippines – Interior Secretary Manuel Roxas II, president-on-leave of the ruling Liberal Party, hit back at Vice President Jejomar Binay on Wednesday, June 24, after the latter criticized the administration for its “crooked leadership” and “selective justice.”

“Natatawa lang ako (I find it funny). The thing is, he’s had every single day over the last 5 years to point out these wrongdoings or mistakes in this admin,” Roxas said in a text message to media, when asked to react to Binay’s speech.

Binay broke his silence on Wednesday, two days after submitting to President Benigno Aquino III his irrevocable resignation from the Cabinet. The Vice President was housing czar and presidential adviser on overseas Filipino workers (OFW) concerns.

(We never heard anything from him until now…now that he has nothing else to say about his alleged anomalies.)

Speaking before reporters and supporters on Wednesday, Binay formally cut his ties with the administration, criticizing its “tuwid na daan” (straight path) campaign.

“Hangad ko ang pamahalaan na kabaliktaran ng manhid at palpak na pamahalaan,” he said. (I want a government that is the opposite of this insensitive and failed government.)

The Vice President and his family are at the center of a months-long Senate probe into allegations that he pocketed city funds during his stint as mayor of Makati. Binay has also been accused of profiting from his role Boy Scouts of the Philippines (BSP) president and chairman of the Home Development Mutual Fund.

Binay and Roxas are expected to face each other in the coming 2016 presidential elections. – Rappler.com