Aquino: Stick with ‘Daang Matuwid’ after 2016 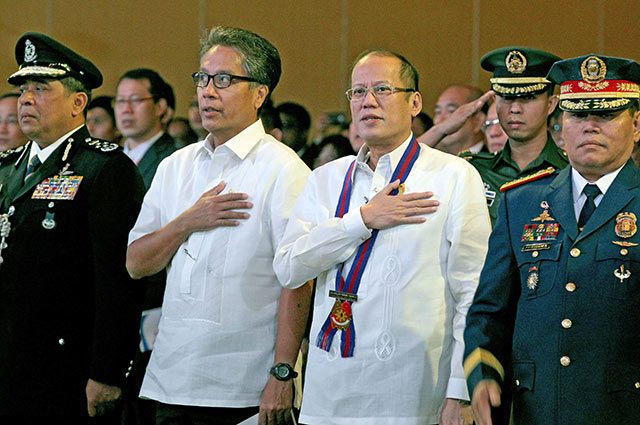 MANILA, Philippines – President Benigno Aquino III told members of the Philippine Air Force (PAF) to stick with the “Daang Matuwid” beyond 2016 to fully achieve long-term reforms in the agency.

On Wednesday, July 1, Aquino said his government is pushing for PAF Flight Plan 2028 to transform the air force, which he says was left “grounded” due to corruption and poor governance in the past.

This program, however, will span 3 presidents. Aquino only has 364 remaining days in office. (READ: The shopping list: Status of PH military’s modernization)

(This means, if you want this plan to succeed, we have to continually side with the Straight Path. Once we stray from this, all the positive gains that we have started will surely go to waste.)

“Daang Matuwid” (Straight path) is the Aquino administration’s tagline for its anti-corruption and transparency agenda.

It’s also evolving into a campaign theme for Interior and Local Government Secretary Manuel “Mar” Roxas II, who is being groomed by the Liberal Party as its standard-bearer in 2016.

But he remains lagging in surveys. In the recent Pulse Asia survey, he came in third after Senator Grace Poe and Vice President Jejomar Binay, both possible contenders in 2016.

The President said he will announce his choice after his last State of the Nation Address end of July. – Rappler.com