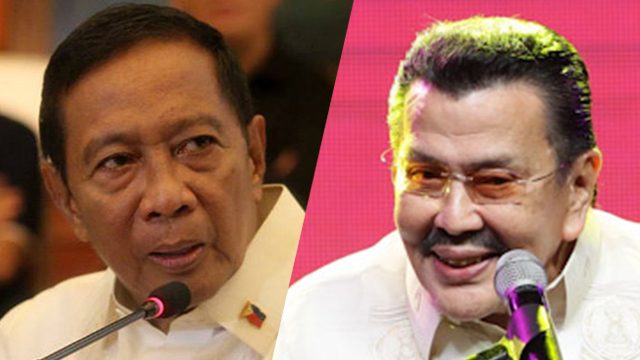 Estrada was absent at the launch of opposition party United Nationalist Alliance (UNA) at the Makati Coliseum on Wednesday, July 1. (WATCH it live here)

Estrada was invited to the party launch but did not appear. His absence raises questions on his support for Binay’s 2016 presidential bid following pronouncements that he might endorse the possible candidacy of Senator Grace Poe, daughter of his late best friend, actor Fernando Poe Jr.

(President Erap also has his own party. And the busiest job is that of a mayor. It’s a 24/7 job, especially as President Erap leads Manila. So it’s understandable I guess that he has better things to do.)

Yet Binay left PDP-Laban last year, and transformed UNA into a political party.

“There will be other events and opportunities for President Erap and VP Binay to finalize their 2016 plans,” Ilagan said.

Still, Estrada’s absence puts in doubt his support for Binay as Poe decides whether or not to run for higher office.

A former action star, Estrada has a strong following among the masses.

In an interview on CNN Philippines Wednesday morning, Vice President Binay downplayed Estrada’s absence, and credited him instead for his 2010 victory.

(I owe my vice presidency to Mayor Erap. If he did not draft me as his running mate in 2010, I would not have been vice president.)

Ejercito said he went to the launch but admits he is still torn between Binay and Poe. (READ: JV Ejercito ‘endorses’ Grace Poe)
“I went to the launch as a friend. [It’s] not good to leave someone who is under fire. But I have to admit that when Senator Grace runs, it will be a problem,” Ejercito told Rappler.

UNA’s launch on Wednesday is meant to formalize Binay’s presidential candidacy, and organize his national and local machinery ahead of the polls.

Binay is expected to be elected chairman of the party. He will deliver a keynote address outlining his platform, and program of government.

Senator Binay dismissed criticism that the Binays were premature campaigning. She said UNA was only accredited as a party in March.

“Among the political parties, we are the baby. This is the first time we are gathering together. Our officers are all interim so this gatheringis more of an organizational meeting.”

Boxing champion and Sarangani Representative Manny Pacquiao received a loud cheer from the crowd. He is expected to be a senatorial candidate of UNA.

Delegates from provinces and cities as diverse as Valenzuela, Marawi, Sultan Kudarat, Taguig, and Benguet showed up to express support for Binay.

The UNA launch had the trademark feel of Binay and Estrada events: a festive atmosphere, bands, and a variety-show type of program.

The embattled Binay is mounting a presidential campaign despite multiple plunder investigations he and his family face. On Tuesday, his son, Makati Mayor Junjun Binay, was suspended over the allegedly overpriced Makati Science High School. – Rappler.com