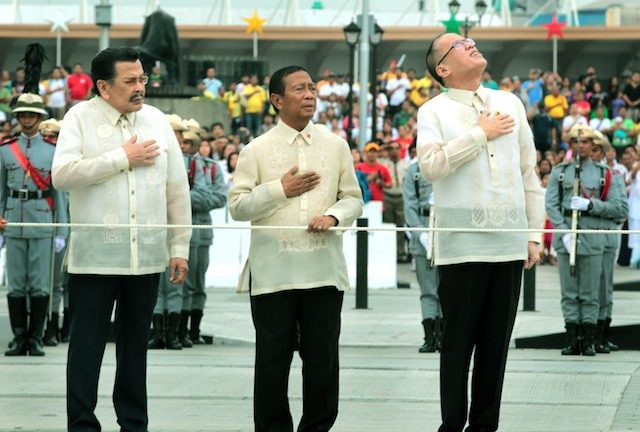 Facebook Twitter Copy URL
Copied
Communications Secretary Coloma, however, refuses to comment on the possibility of getting the former president to support the administration candidate in 2016

MANILA, Philippines – Erap still has it.

Despite its differences with former president and now Manila Mayor Joseph “Erap” Estrada, Malacanang on Thursday, July 2, still acknowledged him as a formidable figure in politics.

Communications Secretary Herminio Coloma Jr said Estrada has an incomparable influence, after having been a president and mayor of the country’s capital. He pointed out that Estrada was the runner-up to President Benigno Aquino III in the 2010 presidential elections – all these despite being ousted in 2001 and imprisoned until 2007.

(The opinion of somebody who became president of the Philippines is incomparable because only a few have reached that position. If we base our answer on political realities, it can be noted [former] President Joseph Ejercito Estrada came in second after President Aquino in 2010. When he aimed for the mayorship [of Manila], he also won. It is very clear that President Estrada has an influence.)

Estrada ran with Vice President Jejomar Binay in 2010, while Aquino teamed up with Roxas. Although only Binay has made an official announcement that he’s seeking the presidency, Roxas is also seen as a top contender in the 2016 elections.

Estrada was a no-show at the launch of Binay’s party, the United Nationalist Alliance, on Wednesday, July 1. This comes as a new development, as Binay and Erap were allies in the 2010 and 2013 elections.

Erap clarified that his absence from the UNA launch should not be misinterpreted as a refusal to support the candidacy of Binay.

He, however, earlier said that he was unsure who between Binay and Senator Grace Poe he would support in 2016.

Although leading in surveys, Poe has not declared any intention to run for president.

Malacañang, however, refused to comment on the possibility of getting Estrada to support the administration candidate in 2016.

The younger Estrada hit the administration for alleged political persecution and misuse of discretionary funds. (READ: Jinggoy: P50M for each convict-Corona vote) – Rappler.com