Duterte on how to fight crime: It has to be ‘bloody’ 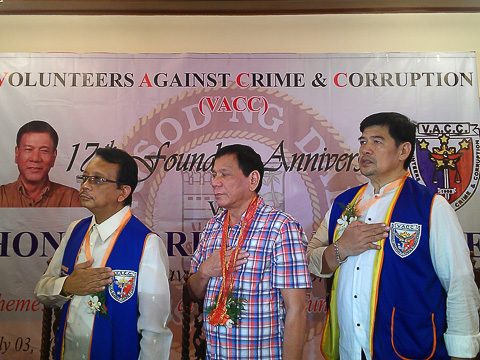 Facebook Twitter Copy URL
Copied
So don't push him to run for president, says Mayor Rodrigo Duterte, if the country is not ready for what he did in Davao City

MANILA, Philippines – How do you effectively fight crime? For Davao City Mayor Rodrigo Duterte, known for having made his place one of the safest cities in the world, it has to be “a bloody one.”

So if Filipinos do not want anything like that in the entire country, he said, then don’t prod him to run for president anymore.

(Based on my plans, it will get bloody, so don’t push for me anymore, it’ll be bloody.)

The long-time Davao City mayor said he has no compassion for criminals, reiterating his firm stand to restore the death penalty in the Philippines.

VACC was pleased to hear that Duterte echoed their stand on death penalty.

VACC invited Duterte to speak at its anniversary for the second consecutive year. The group supports his advocacy against criminality, which improved its rank as the 5th safest city in the world according to Numbeo.com, a crowd-sourcing rating site which previously ranked the city 9th earlier this year.

“If he has done good in Davao, why don’t we have a similar approach here in the Philippines?” said Dante Jimenez, founder and chairman of the VACC.

Justice Secretary Leila de Lima had criticized Duterte’s “disturbing” remarks in the past, warning against resorting to extra-legal means of dealing with suspected criminals.

The 70-year-old mayor retorted in his speech: “This government has spent money to go on an operation, to arrest the criminal, prosecute him, then there’s a regular trial. ‘Pag dating sa Muntinlupa, nagluluto ng shabu, tapos nambababae. Here are guys who are supposed to be in prison, in retribution for their sins against humanity, tapos pinapataba mo, nagnenegosyo pa,” Duterte said.

(When they get to [the prison in] Muntinlupa, they even manufacture crystal methampethamine, then they get girls inside their cells. Here are guys who are supposed to be in prison, in retribution for their sins against humanity, then you fatten them up, and give them business.)

He also said he would suggest to the next president to raise the salaries of policemen and teachers, and remove tax on workers who earn P25,000. – Rappler.com