MANILA, Philippines – Senator Ferdinand Marcos Jr continued to lead the race for the vice presidency, according to the results of the latest ABS-CBN survey conducted by Pulse Asia.

Marcos, the only son of the late dictator, led with 31% voter preference, a 2-percentage-point rise from the previous ABS-CBN poll.

Pulse Asia noted in its report that Marcos is favored by 3 out of 10 registered voters in the survey conducted from April 19 to 24.

The senator led overwhelmingly in the National Capital Region (NCR) and Balance Luzon, getting 45% and 38%, respectively. He is also the top choice for Class ABC with 38% and Class D with 31%. 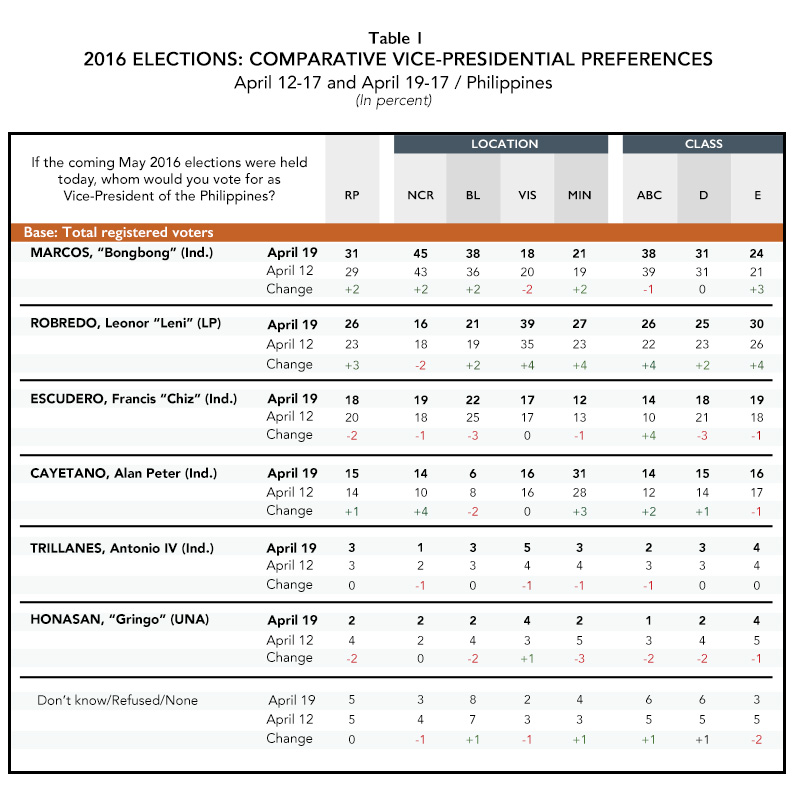 Escudero, who is running as an independent alongside Senator Grace Poe, was the top “second choice” for vice president.

Only 5% of registered voters said they were not keen on choosing a vice presidential candidate.

The national survey had a sample of 4,000 registered voters, with a margin of error of ±1.5% at the 95% confidence level.

The survey period covers the arrest of a student suspected to have hacked the Commission on Elections website, which caused the leak of voters' personal information.

Other news events that happened during the survey period include Duterte’s joke about an Australian missionary who was murdered and raped, meetings between the 2016 candidates and the bloc-voting Iglesia ni Cristo, the last presidential debate organized by the Commission on Election, and an ABS-CBN vice presidential debate which Marcos skipped. – Rappler.com