GOV'T MEETING. President Rodrigo Duterte presides over a meeting with key government officials prior to his 'Talk to the People' at the Malacañang Palace.

Facebook Twitter Copy URL
Copied
'I am not supporting any presidential candidate,' says President Rodrigo Duterte, days after his own party announced it would back Ferdinand Marcos Jr.

MANILA, Philippines – President Rodrigo Duterte is departing from his political party’s endorsement of Ferdinand Marcos Jr., saying on Thursday, March 31, that he will not be backing any presidential candidate.

“I am not supporting any presidential candidate. Neutral ako (I’m neutral),” said Duterte during an event in Lapu-Lapu City in Cebu province. 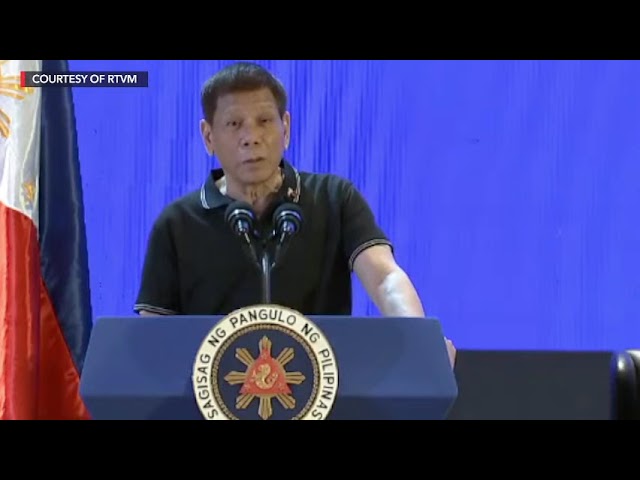 “This is not a campaign, because I am not campaigning for a particular candidate,” he continued.

Only nine days ago, his party PDP-Laban decided to endorse presidential race front-runner Marcos. Officials of the Duterte-backed wing cited the President’s earlier meeting with Marcos as one reason they decided to back the former senator and late dictator’s son.

Asked if the meeting was an indication that the President would also be supporting Marcos, his own daughter Sara Duterte’s standard-bearer, Acting Presidential Spokesperson Martin Andanar said the choice of the party did not necessarily reflect Duterte’s choice.

Duterte spoke a little bit more about the presidential candidates. He wondered if any of them would be “as committed” as he in curbing illegal drugs and the communist insurgency, two of his most controversial governance priorities.

It’s not the first time that the President diverged from the positions of his own national political party, in the realm of elections. In 2019, he carried his own personal senatorial slate distinct from PDP-Laban’s five-person slate. – Rappler.com