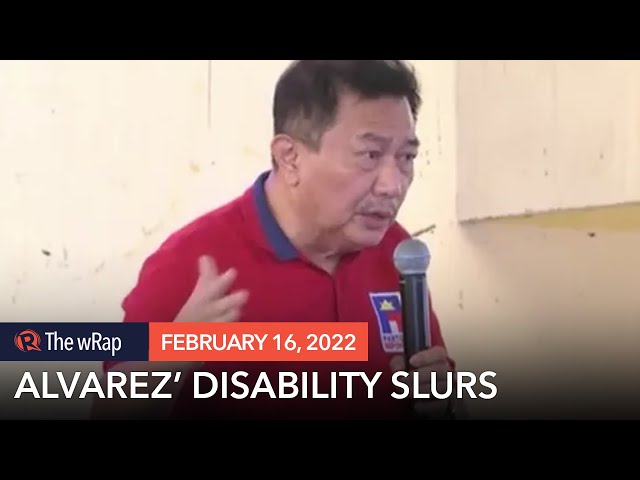 In a Facebook post on February 12, the group called the attention of Alvarez to stop the slurs. “Autism or other disabilities should NOT be used as ammunition in the on-going political exercise. To use disability as a joke or insult does not elevate one’s standing as a public servant. Leaders are supposed to protect the vulnerable – not ridicule them,” they said, referring to the livestream of the event on presidential aspirant Senator Ping Lacson’s Facebook page.

Alvarez, an ally of Lacson, is seen talking about Oyo Uy, the son of a political rival who is running for vice governor. In his speech, Alvarez makes fun of Uy as a “special child” and as “autistic.” As Alvarez teased and taunted his rival’s son’s smile, he then endorsed his own ally, whom he said had a “normal smile.” Uy is a candidate of the regional party Hugpong ng Pagbabago, which is chaired by vice presidential candidate Sara Duterte.

The former House speaker apparently made the same “joke” at another gathering, this time in Tagum City.

“Congressman Pantaleon Alvarez hurled disability slurs on stage at a Ping Lacson rally in Panabo City and HE REPEATED THE SAME DISABILITY SLUR at a separate rally in Tagum City,” said the Autism Society.

Speaking in Bisaya, Alvarez poked fun at his rival, who he said was clueless, and his rival’s son, whom he again labelled “abnormal” and a “special child,” to the cheers of the crowd. Again, Alvarez used this to campaign for his own choice for vice governor, Franklin Gentiles. “Abnormal, o dili (Abnormal, or not)?” Alvarez asked the crowd.

In a statement posted on their website,  Autism Society Philippines note that “within the first two weeks of the campaigning, we have seen disability slurs hurled by supporters online as well as by a candidate on-stage at a political rally.” The campaign period began on February 9 for candidates vying for national positions.

“We expect leaders to protect vulnerable Filipinos – not use their disability to ridicule others,” the non-profit organization added.

“The Autism Society Philippines challenges candidates at all levels to articulate their plans for the improvement of the lives of Filipinos with disabilities and those who care for and love them – outside the context of charity. We want to support leaders who have spent time as public servants – listening to those with disabilities and creating sustainable programs for them – keen on inspiring genuine INCLUSION of those who have been cast to the fringes of society,” it added.

The group, in a later tweet, said it would be seeking legal action “on this flagrant abusive language against a protected group of vulnerable Filipinos” as they encouraged followers to express their indignation online and to tag Lacson. They also called on followers to contact Alvarez’s official government email address.

Carmen Zubiaga, a senatorial candidate and former chief of the National Council on Disability Affairs, criticized Alvarez while leaving a reminder for both candidates and their supporters. “Never use disability to discredit your political rivals and as a mockery, especially in public dahil may kaso yan (because you can be sued). At yung mga tumawa pa at pumalakpak, sa ganitong eksena, anong tawag sa inyo? Mga utu-uto! Nakakaumay na yang mga katangahan ‘nyo!” she said in a tweet.

(And to those who laughed and clapped over it, what do you call yourselves? Fools! Your stupidity is exhausting.)

Alvarez himself has not responded to the criticism. Lacson and his running-mate, Senate President Tito Sotto, flew to Davao del Norte for a series of sorties on February 11.  – Rappler.com

The Wong family fights for justice for sons with autism