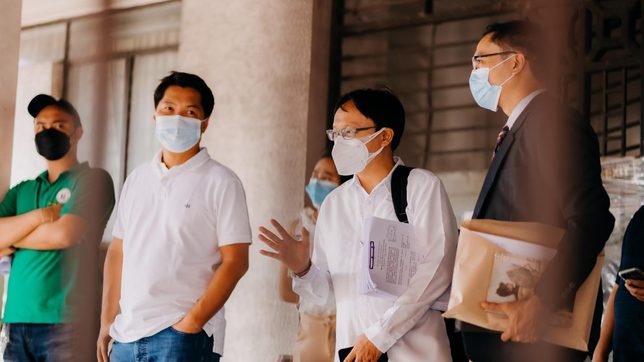 COURT RULING. Alfredo Abelardo 'Albee' Benitez (left, in white) emerges from the Bacolod municipal trial court after a hearing on a case that challenges his transfer of voter's registration from Victorias City to the capital of Negros Occidental.

The court said that the Voter Registration Act of 1996 or RA 8189 states that applicants should have resided in the new place of residence for at least six months immediately preceding the election.

The ERB’s July 23 decision noted that Benitez would have lived in his new residence at the Bantug Family Compound in Mountain View Subdivision, for a year and 11 days by election day in 2022.

Despite claims by petitioners that their witnesses had not seen Benitez around the community, the presiding judge said that many photos of Benitez’s activities in his new home, with documented dates, were more believable.

The court also said that Benitez had obtained the titles to his new residence a few days before his April 22 application for voter’s transfer of residence.

Before Benitez ended this three-term stint in the House of Representatives in 2019, his Statement of Assets, Net Worth and Liabilities showed a net worth of more than P1 billion, making him one of the richest House members in 2018.

“There is no basis to claim that the taxes paid is deficient as no evidence was presented about his income in the year preceding,” the court said.

Benitez will face off with reelectionist Mayor Evelio Leonardia. Former councilor Caesar Distrito announced on Sunday, October 3, that he had accepted Benitez’s offer to be his running mate. – Rappler.com