PRESIDING OFFICER. Comelec Chairman Saidamen Pangarungan speaks during the proclamation of winning senators on May 18, 2022.

Facebook Twitter Copy URL
Copied
'I firmly believe that if president-elect Marcos would give much weight to the successes of the previous election… I think I stand a good chance of being reappointed,' says former Comelec chairman Pangarungan 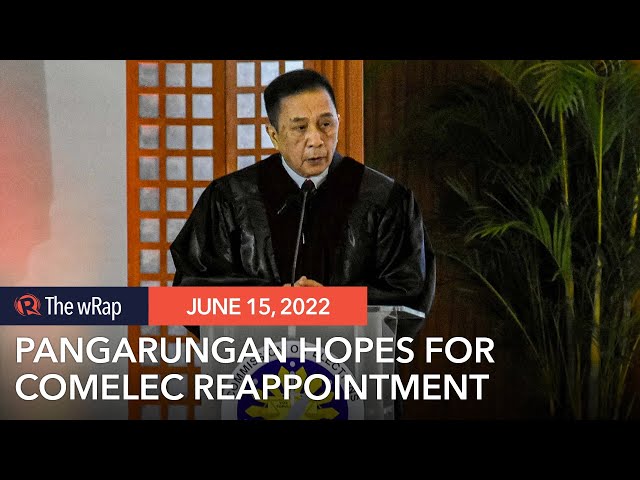 MANILA, Philippines – Former Commission on Elections (Comelec) chairman Saidamen Pangarungan embraced the idea of potential reappointment by president-elect Ferdinand Marcos Jr., and promised to deliver on combating electoral fraud in future polls if given the chance.

In his first sit-down interview since becoming elections chief in March and stepping down only two months later, Pangarungan said he would accept if Marcos offers him the Comelec chairmanship.

“I firmly believe that if president-elect Marcos would give much weight to the successes of the previous election, which had the highest voter turnout, and which was very peaceful, the most credible, and had the fastest proclamation, I think I stand a good chance of being reappointed,” Pangarungan said in a Rappler Talk episode that aired on Tuesday, June 14.

“I intend to work hard to stomp out electoral fraud, disinformation and vote-buying. I already have plans of action in the event I’m reappointed. Also, I always work to the benefit of my employees,” he added.

Pangarungan and his Comelec batch mates – now-former commissioners George Garcia and Aimee Torrefranca-Neri – left the poll body in early June after the Commission on Appointments (CA) bypassed their confirmation bids.

The three, who were appointed to the Comelec in March by outgoing President Rodrigo Duterte, were not given a chance to make their case to the CA due to the lack of quorum.

Pangarungan said that in a closed-door meeting after the last CA session of the 18th Congress, Senate Majority Leader Juan Miguel Zubiri reiterated that it was the desire of incoming Marcos cabinet officials to give the president-elect the power to make his own picks to the Comelec, as well as the Commission on Audit and Civil Service Commission.

Did he think that was fair?

“If you look at the provision of the Constitution, Article 6 Section 1, it provides very clearly that the three constitutional commissions shall be independent, and not beholden to anyone, including the appointing power,” he noted when asked. “[Zubiri] emphasized to me we were not rejected by the CA, but only bypassed. We stand the chance to be reappointed.” 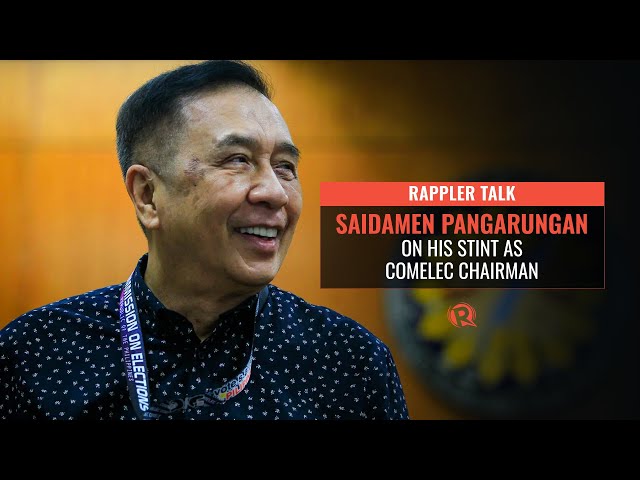 The point that Pangarungan made was similar to Senator Koko Pimentel’s during the last CA hearing.

“Who appoints them should not be a big issue as long as the qualifications of independence, integrity, and competence are present in the nominee or appointee,” Pimentel had said.

If given another chance to serve in the Comelec, Pangarungan said he would lobby for stiffer penalties on election offenses.

“Right now, election offenses are punishable by one to six years. If we can increase that to six years to 12 years, that will be heavy,” he explained. “Number two, penalize disinformation. These are the things we need to legislate.”

“If we can score some prosecution and conviction for five to 10 people, that will send a chilling effect to the voters not to sell their vote.  If we can add perpetual disqualification [as punishment to] candidates caught vote-buying, they will be scared,” he added.

Pangarungan entered the poll body with two months left before the 2022 polls, when most election preparations were already made final by his Comelec en banc predecessors.

He said that because he came in late, he ran out of time to strengthen the crackdown on the “endemic” practice of vote-buying.

‘Benefit of the doubt’

Marcos’ victory raises fears that he might repeat the things that his dictator father did, like supposedly tampering with the elections during the Philippines’ martial law era.

But Pangarungan, who started his political career as an opposition candidate during the earlier Marcos years, said these concerns are “presumptuous.”

The bypassed poll chief expressed confidence that Marcos will protect the sanctity of the ballot and right of suffrage.

“We have to give the benefit of the doubt to the incoming president,” Pangarungan said. “We cannot judge the new president from what happened several years ago.”