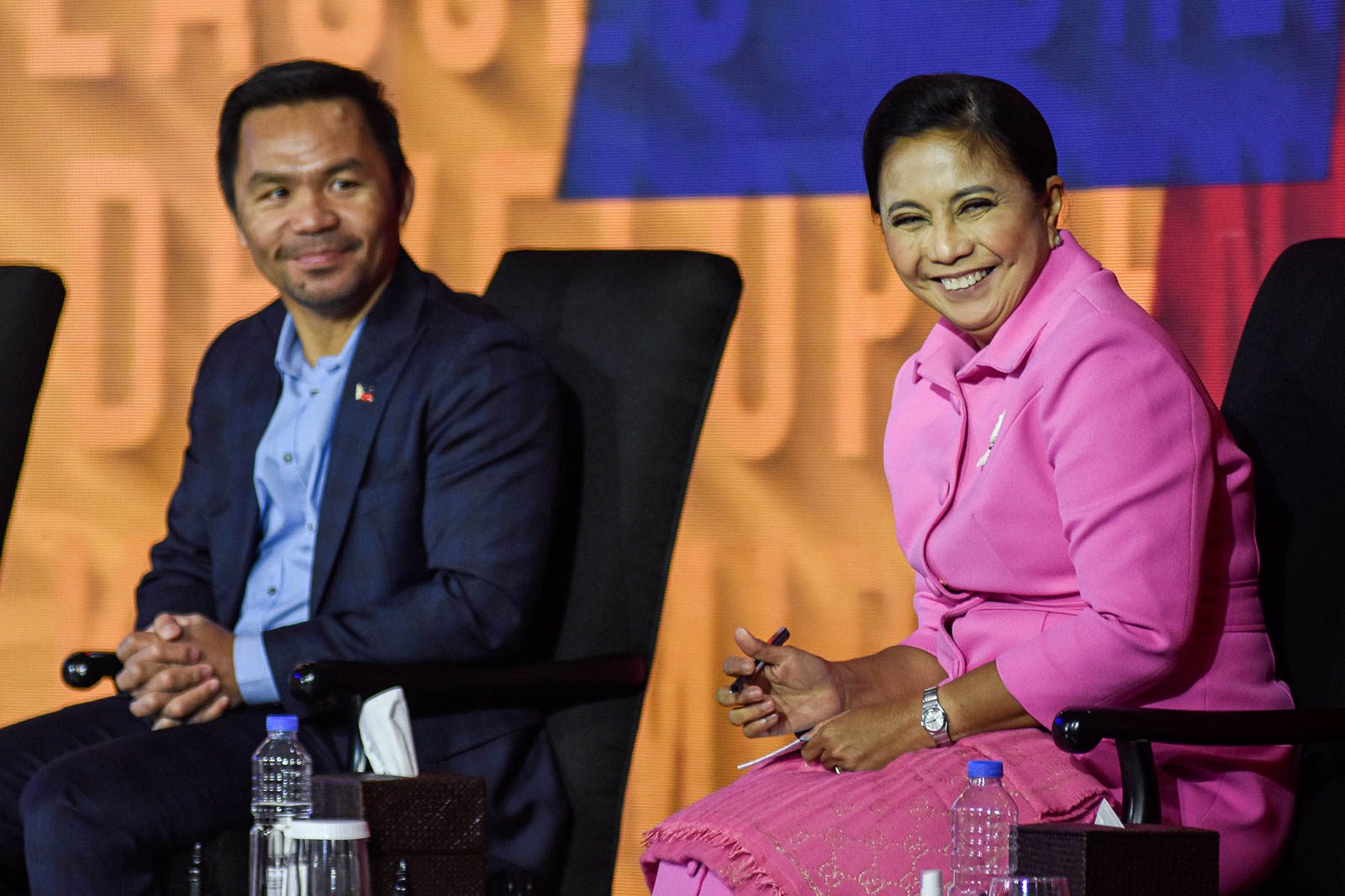 Sen. Manny Pacquiao and Vice President Leni Robredo during the first Comelec Presidential Debates at the Sofitel Hotel in Pasay City on March 19, 2022. 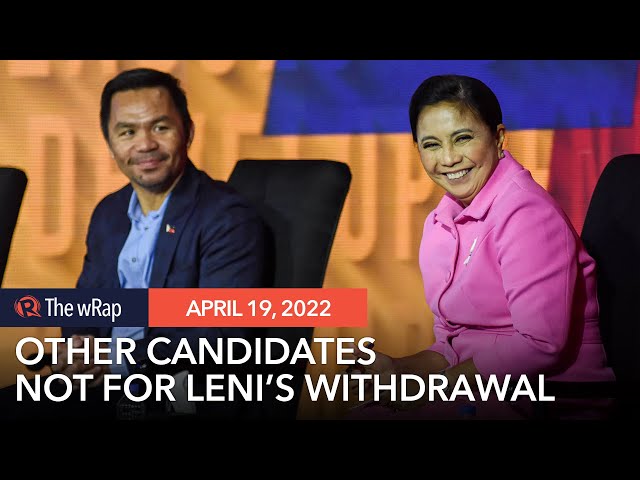 MANILA, Philippines – Presidential bet Manny Pacquiao wants all candidates to stay the course, according to his campaign manager, as Manila Mayor Isko Moreno asked Vice President Leni Robredo to withdraw from the race.

Asked if Pacquiao supported the call, Pacquiao campaign manager Salvador “Buddy” Zamora told Rappler on Monday, April 18, “No. He wants everybody to run and let the people choose.”

Moreno, Senator Ping Lacson, and ex-defense chief Norberto Gonzales held a press conference at five-star Manila Peninsula Hotel on Sunday, April 17, to announce that they will not withdraw.

During the briefing, Moreno called on Robredo to withdraw, claiming that her candidacy “is not effective” against Marcos. Lacson later clarified that he does not share the same view as Moreno.

Days before the Sunday briefing, Zamora had told Rappler that he does not see the point of joining a press conference that announces nobody would withdraw.

But ahead of the briefing, Pacquiao’s team announced he would be attending, but he would be coming from General Santos City. It was Lacson who invited Pacquiao.

In a Rappler Talk interview, Zamora said on Tuesday, April 19, that the team was not privy to the details of Pacquiao’s call with Lacson, which, he believed, is a “discussion between friends.”

“Well, he really wanted to go because he promised Senator Lacson that he would be there. But this was talk between Senator Pacquiao when he was in [General Santos City] and Team Pacquiao was here mostly in Manila, like myself,” he said.

“If we had time to advise our candidate, we would have advised him to stay away from it. But that was his decision,” he added.

Pacquiao was able to attend the meeting among candidates before the briefing via video call, but his plane landed too late for the press briefing.

Zamora said: “Just as he (Pacquiao) doesn’t want to suggest to back out, he also wants others, who are willing, to run. That’s a decision made long before anything else eh.”

Zamora explained that his non-attendance was due to air traffic issues.

“They were circling around until finally, they landed yata (around) 2 pm already. It was too late,” he said.

It seemed though that Pacquiao being a no-show on Sunday did him good. On social media, Pacquiao earned praises from Robredo supporters.

Speaking to One News, Pacquiao running mate Lito Atienza claimed that the senator “never intended” to attend the press briefing.

(The truth is, that meeting was supposed to be for unity to stop the momentum of a Marcos victory. So why was Leni mentioned? That’s why he said, ‘It’s a good thing that I did not attend, somebody told me that I should not attend.)

Zamora said on Tuesday that Atienza may have been speaking in hindsight. But he agreed it was good that Pacquiao was unable to be physically present at the press conference.

“The results speak for themselves. The outcome received a lot of flak. I didn’t hear anything positive at all from the press [conference]. Even the venue was a subject of [criticism], you know, [a] wrong choice,” Zamora said.

He added that he does not think Pacquiao would still sign the joint statement by the three presidential bets reiterating they would not withdraw.

“I don’t believe so because he lost that opportunity. And besides, I don’t how much he knew about that joint statement,” Zamora said.

Pacquiao and Robredo seem to have a warm relationship after the failed “exploratory unity talks” in 2021, ahead of the filing of candidacy.

At one point, Robredo even said that he would vote for Pacquiao, had she not run for the presidency.

Seeing Pacquiao with Moreno would also raise eyebrows. In one interview, Pacquiao, who is running on an anti-corruption platform, claimed that Moreno has corruption issues. – Rappler.com