Can Jack Enrile bury the past?

MANILA, Philippines – It was one of the surprises of the 2013 senatorial elections—in the first survey on voter preferences that came out in December 2011, Juan Ponce Enrile Jr made it to the Magic 12.

Enrile Junior, or Jack, is on his fourth term as Cagayan representative (1998-2007, 2010-2013), but managed to stay out of the national scene during those nearly 12 years. He's one of those scions of political families who are forced to run for public office. He has never shown serious interest in the job. And his victories were attributed to the fact that his family practically dominates local politics.

Jack is one of Congress's top absentees. He prefers working in the field to talk to people, he says. Whenever he was present in plenary, he shied away from reporters – at least until he declared his plans to run for the Senate.

There can only be one explanation for the survey results, and Jack himself knows it. Respondents must have mistaken him for his popular father and namesake, Senate President Juan Ponce Enrile (JPE).

Jack, however, says he has embraced politics, and is now inspired to continue the legacy of his father.

“If I had to do it all over again, I would have done it differently. Had I known then what I know, I would have put in more effort in those 3 terms that I had," he said.

In the past two years, Jack has visited almost all of the country's 80 provinces, supposedly to promote his "Food for Filipinos First" bill, which seeks to increase investments in the agricultural sector and create a food requirement plan so the country doesn't need to depend on food imports.

He says this advocacy is the reason why he is often absent in plenary sessions. Most of his absences are excused, marked as "official business."

"I think I conducted more sectoral consultations than most congressmen. I enjoy the field work," he said.

Jack has gotten friendlier with the media, too. The man many fellow congressmen and reporters in the House of Representatives once found aloof is showing to be very approachable, candid, and a good conversationalist.

He likes his pipe and his guns. He doesn’t shy away from controversial issues. He confronts them with straightforward answers and his humor. “Unless you engage me, I'm very quiet. They misconstrue that as being suplado. But those who know me like me," Jack explained.

Jack's numbers have continued to rise since the first survey. The last Pulse Asia survey, conducted in September 2012, showed him hovering from ranks 3 to 5.

Jack believes that, by now, voters are able to distinguish him from his father. Pulse Asia president Ronald Holmes, however, says it cannot be discounted that voters may still be confused.

Jack is a member of the Nationalist People's Coalition (NPC), a coalition ally of the administration, but he is running under Vice President Jejomar Binay's United Nationalist Alliance (UNA). His father is a stalwart of the Pwersa ng Masang Pilipino, one of the parties in UNA. 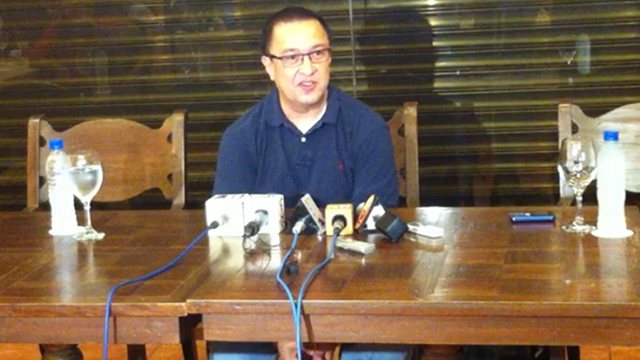 If today 54-year-old Jack is enjoying the popularity of his father, the young Jack was bullied and beaten up in school because of him. Three to 4 decades ago, when his father was the demonized implementor of Martial Law, being JPE's son was a heavy burden, he says.

Father and son always fought. Jack resented that he was an absentee father, and so resented as well the political work that often took his father away.

Jack tells Rappler: "Having been subjected to the kind of exposure, being a son of a political figure like JPE sort of turns you off in terms of what they were doing at that time, even to the point of cringing sometimes as to what they were thinking. You would be privy to certain conversations and some of the things they were talking about. I was just shaking my head. And I said, I'm leaving. I'm going to the states. I'm having my own life. I don’t want to be part of this."

Jack remembers a letter he wrote his father a few days before the EDSA revolt in 1986. "I said, 'I cannot understand how a man such as you having achieved what you have achieved in your life can serve a man like Marcos – still,'" Jack recalled. (This letter was not mentioned in JPE's recently published memoir.)

"I remember he received that letter, one or two days before he decided to go for it (EDSA). He hugged me, he cried, and said, 'Don’t worry, hijo, everything will be fine.'”

Growing up, Jack acquired a notorious reputation. Jack came to be known as Metro Manila's bad boy. He was a legend!

He insists they were all lies. “There are a lot of myths. They run the gamut: from a murderer to a rapist to a gun runner to a smuggler to a drug dealer – everything else under the sun. I heard that I had been at some point involved in all the unsolved crimes in Metro Manila."

He added: “I have to confess, I was not the most angelic of teenagers. I lived what I considered to be a normal teenage life, where guys drink, guys get drunk, and guys get into fights. However, my fights have resulted in some harm. And that basically sealed my fate in terms of my reputation.”

His notorious reputation started with one incident that made newspaper headlines in September 1975 – the death of Ernest Lucas.

The death of Ernest Lucas

Ernest did leave, but he returned later in the night. It ended badly. Ernest died of a bullet shot in the forehead.

"Mr Secretary, your son killed my son," said Ernest's father to JPE in Cebu the following day, according to Enrile's memoir published in September 2012. Both fathers occupied powerful positions in the Marcos administration. JPE was the defense secretary; Ernesto Lucas was the Philippine Navy commander.

It was a high-profile case that immediately made the front pages, right beside stories on the historic Ali-Frasier fight in Manila. Jack was eventually cleared by government investigators. His aide, Sgt Danilo Cruz of the now-defunct Philipine Constabulary, testified that he shot Ernest to defend Jack. He was sentenced to 12 years imprisonment.

To JPE, it was "one of the most jolting and painful experiences of my life," he writes in his memoir. The defense secretary took a leave of absence in an attempt to dispell talks that he was influencing the investigation on his son.

Jack eventually took a low profile and started a new life in the United States, where he pursued college. “In the US, I was happy. I lived a comfortable life. I had a sports car when it was age-appropriate to have sports car,” he says.

The ghost of Alfie Anido

Fast forward to Dec 30, 1981. Popular celebrity Alfie Anido, a contemporary of Gabby Concepcion, was found dead in his Makati house – also with a bullet to his head. He was the boyfriend of Jack’s sister, Katrina.

Based on newspaper reports, the Anido family immediately issued a statement that it was a suicide. Coffee shop talks, however, buzzed with allegations that Anido was shot by Jack, who was in the Philippines then for the Christmas vacation.

With Jack's reputation, it was not difficult to believe. 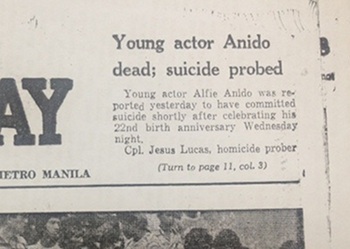 " I had absolutely nothing to do with Alfie Anido," Jack tells Rappler. "Truth be told, Katrina was in love with him. I was at that time happy because she had a series of bad relationships before that. And she seemed to be really happy. I could see that they’re really in love."

Jack has a vivid recollection of that night. He was with his father's chief security aide, now Senator Gregorio Honasan, having dinner in a Japanese restaurant in Makati City, when they got two radio messages. First, Anido was driving like a maniac from Antipolo to the Enrile residence in Makati to bring Katrina home. Second, Katrina was on his way to Anido's house in hysterics. That's when Jack decided to follow Katrina.

In his memoir, JPE narrated that Katrina and Alfie had a huge fight after Anido’s birthday celebration in Antipolo City. He said Alfie hit Katrina, who later decided to break up with the actor. At his home, Alfie shot himself, JPE said.

"We had no clue what was going on really. When I got to Alfie's house in Bel-Air, I started to hear Katrina wailing," Jack narrated. Jack says he rushed to where Katrina was and there he saw a dead Anido, with a bullet shot on his head.

Rappler checked old newspaper accounts. Based on a Jan 2, 1982 report of Bulletin Today, homicide prober Cpl Jesus Lucas went to the Anido home to investigate but Anido's parents did not want to talk, except to say it was "self inflicted" and “the minister of defense had already come to investigate.”

The minister was JPE.

But in his memoir, JPE said two sets of investigators were sent – the National Bureau of Investigation and "Malacañang."

By "Malacañang," he meant the Armed Forces chief of staff at the time, the late Gen Fabian Ver. JPE claimed that it was the time when Ver and Imelda Marcos were supposedly plotting against him to make President Marcos lose his trust in him.

"To create the impression in the mind of the public that Jack had something to do with the deth of Alfie Anido, General Ver unleashed his attack dogs to fish for evidence  against Jack," wrote JPE. 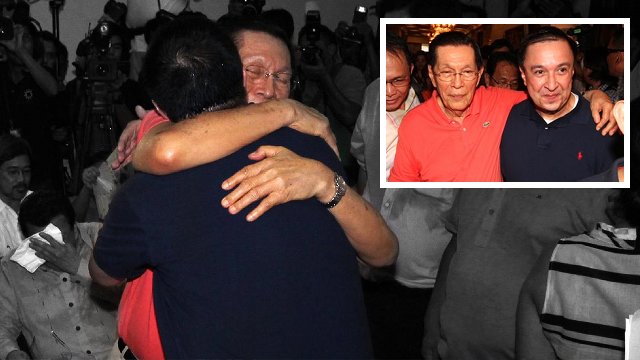 Father and son did not reconcile until 2006. It was the time that Jack says he started to appreciate his father and wished to follow in his footsteps.

"We had this long and painful talk in his house. We put our differences aside and buried the hatchet," Jack says. "Daddy has changed. And Daddy is the brand of politics that I want."

The photo of JPE and Jack together and waving at the crowd after the latter filed his certificate of candidacy in October 2012 was splashed all over newspapers the following day. Jack says it was the first time they were together – willingly – in a political event.

Jack's senatorial bid has put him back in the public eye, reviving controversies he had faced as a young man. Philippine Star columnist and advertising veteran Yolanda Ong was the latest to revive Anido's death and the alleged car smuggling syndicate that he and his father are supposedly running in Cagayan's Port Irene.

Jack kept quiet, but JPE is not take it sitting down. The column is now the subject of a P31-million damage suit that JPE filed against Ong. On Tuesday, January 8, Ong put out another column, reprinting two old articles, one of which was about Jack's bodyguard shooting in the head a businessman who stepped on Jack's foot outside a disco.

If Jackie wins, he and his father will share 3 years in the Senate before JPE's second and last term expires.

"I would like to continue that legacy that he started, hopefully build on it, and see what will become of a man like me who had my own checkered past. Just like the Filipinos giving JPE a second chance, I hope they’re willing to give Jack Ernile a second chance as well," Jack says.

In a country that easily forgives and forgets, survey numbers suggest that Jack has nothing to worry about. – Rappler.com