Facebook Twitter Copy URL
Copied
Now that former councilor Jesus Dimafiles of Barotac Nuevo, Iloilo, has dropped out of the race, he says he 'will focus on campaigning for the president we believe in, who our country needs'

Former Barotac Nuevo councilor Jesus Dimafiles, a Nacionalista Party member who was eyeing a comeback as town councilor, disclosed this in a four-minute video posted on his personal Facebook page on Friday night, March 4.

(SB Jess signing off. This cause transcends my political career because this election has a big impact on the future of our youth.)

Dimafiles explained why he was withdrawing his candidacy.

(In the past few days, I posted on my Facebook account the support for the candidate endorsed by [Nacionalista Party]. Many were surprised, confused, and there were those who were disappointed by us.)

The local lawmaker explained that the leadership of his party, Nacionalista Party, required him to endorse Marcos, despite being known to family and friends as a fervent supporter of presidential candidate Vice President Leni Robredo.

He said that his public statement of support “hurt his heart and made him sleepless.” He recalled his days at the University of the Philippines Visayas, where he learned to understand the country’s situation of corruption and abuse during the Martial Law regime of the late dictator Ferdinand Marcos, the survey frontrunner’s father and namesake. 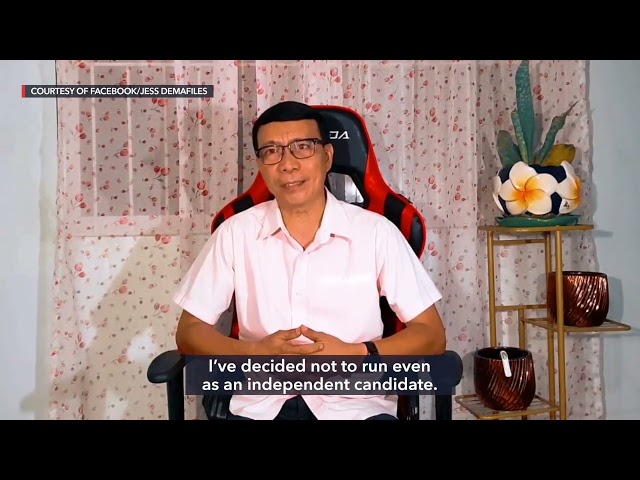 Dimafiles also cited his father’s role in the core group of slain Antique governor Evelio Javier during the 1986 snap elections. His father was in San Jose, Antique, when Javier was assassinated, the councilor said.

(I was required by our political leadership to declare public support [for Marcos]. My and my family are known supporters of [Robredo]. It hurt me and my heart, and it made me sleepless for days.)

He also said his party dropped him from its lineup despite his explicit endorsement, which pushed him to drop his candidacy.

(I complied with what was required of me out of due respect to our political leaders and as a party member. Incidentally, despite my compliance, they still dropped me from the lineup.)

(After family consultation, deep consideration, and prayers, I decided to no longer run even as an independent candidate, and we know that many still support us and our sincerity to public service.)

Dimafiles said that he and his family would focus instead on campaigning for Robredo, saying that his support “goes beyond his political career.”

(I will focus on campaigning for the president we believe in, who our country needs, because this cause goes beyond my political career. In this election, there will be a great impact to the future of our children.)

“Today, I can proudly and openly declare, Kulay Rosas ang Bukas, kag Laban Leni (the future is rosy, and fight, Leni)!” he further added as he ended his video.

Dimafiles was elected to the Barotac Nuevo town council in 2010, and was succeeded by his daughter Anne-Anne in the 2019 elections, after he served three consecutive terms.

The Nacionalista Party in Iloilo is led by former congressman Ferjenel Biron, who is seeking a political comeback by succeeding his son, incumbent 4th District Representative Braeden John Biron.

Braeden John, who previously served as Barotac Nuevo mayor, will now seek mayorship in the neighboring town of Dumangas, while his brother Bryant Paul is seeking reelection as mayor in his old town.

The Biron patriarch is serving as the UniTeam’s campaign manager in the province. – Rappler.com