The first round culled the most controversial criticisms held against each of the candidates, ranging from unexplained wealth, health, inexperience, incompetence to adultery.

Binay, responding to the moderator’s question of how 30 years in government service could yield 11 real estate properties outside of two that were inherited, answered that the properties were bought with earnings from his law practice and his wife’s medical practice before he took government office in 1986. He was unable to explain how a pro bono human rights lawyer and a child born to poverty – both characterizations Binay uses to build his public image as a defender of the downtrodden – could accumulate large tracts of real estate on a government salary.

Senator Miriam Defensor-Santiago was reminded of her recent less than sterling attendance in the Senate, and was asked how she thought she could handle the heavier demands of a presidency. She responded, indignantly, that diseases can come and go or disappear, that she was in fact at death’s door but survived, and that the presence of a disease is not a legitimate standard for disqualification. She also added that the duties of a senator are often equal or heavier than that of a president. “Sometimes a senator has to fight against all the senators who stand against her. Not like a president, who is surrounded by people saying hallelujah.”

Davao Mayor Rodrigo Duterte said he had never committed an extrajudicial killing. He then added that “if I become president it will be bloody because I will order the killings of all criminals and drug lords” – an order, it must be noted, that falls under extrajudicial killings in a country without the death penalty.

Duterte admitted to his womanizing. “Well, if you’re separated from your wife, then what do you do with yourself? What do I do with what I’m carrying” – possibly referring to his penis – “when I can’t sell it and you can’t pawn it. You use it, or you die.”

Senator Grace Poe told the mayor that it may be necessary to restrain himself from his manly overtures as presidents, like parents, are must be examples to children. She added she would continue to emphasize respect for all people, of all genders. Duterte answered that all his activities happen inside bedrooms, and that “you don’t flaunt it in public.” He also added that his other wife is in the United States and that his actions in the interim were natural. “It’s biology, actually, it is biology.”

Asked about her comparative inexperience, Poe enumerated her administrative role in the MTRCB, as well as her senatorial experience and the fact that as a mother, she understood people’s needs. She also referred back to Santiago’s earlier comment that the presidency would be easier than the senate. Former DILG Secretary Mar Roxas told Poe that “the presidency isn’t on-the-job-training.” Poe retorted that Roxas, for all his vaunted experience under three administrations, had seen his two departments, the DOTC and the DILG, investigated by the senate. “I don’t think I need that much experience to know the government was lacking in transportation and security.”

Roxas responded to questions about his response to Super Typhoon Yolanda by saying he was in the disaster zone before, during, and after the storm. “I did not leave until the situation was stabilized and I was not like the others who flew in on helicopters like tourists, left, and now have so much to say.” Binay accused Roxas of “analysis paralysis. “And where was Roxas? After the quake and after everything that happened in Leyte, he disappeared, and that explains why those from Leyte are so angry with him, because of his incompetence handling the problem of Yolanda.”

Rappler editors called this round for Roxas, who was concise and straightforward. The usually playing-safe and long-winded Roxas immediately went on the offensive when he made his opening statement and during the 1st round, singled out his rivals for their perceived weaknesses. He called out Poe for being inexperienced, telling her that the presidency is not an OJT.

Netizens voted Duterte as this round's winner. The second place went to Santiago. 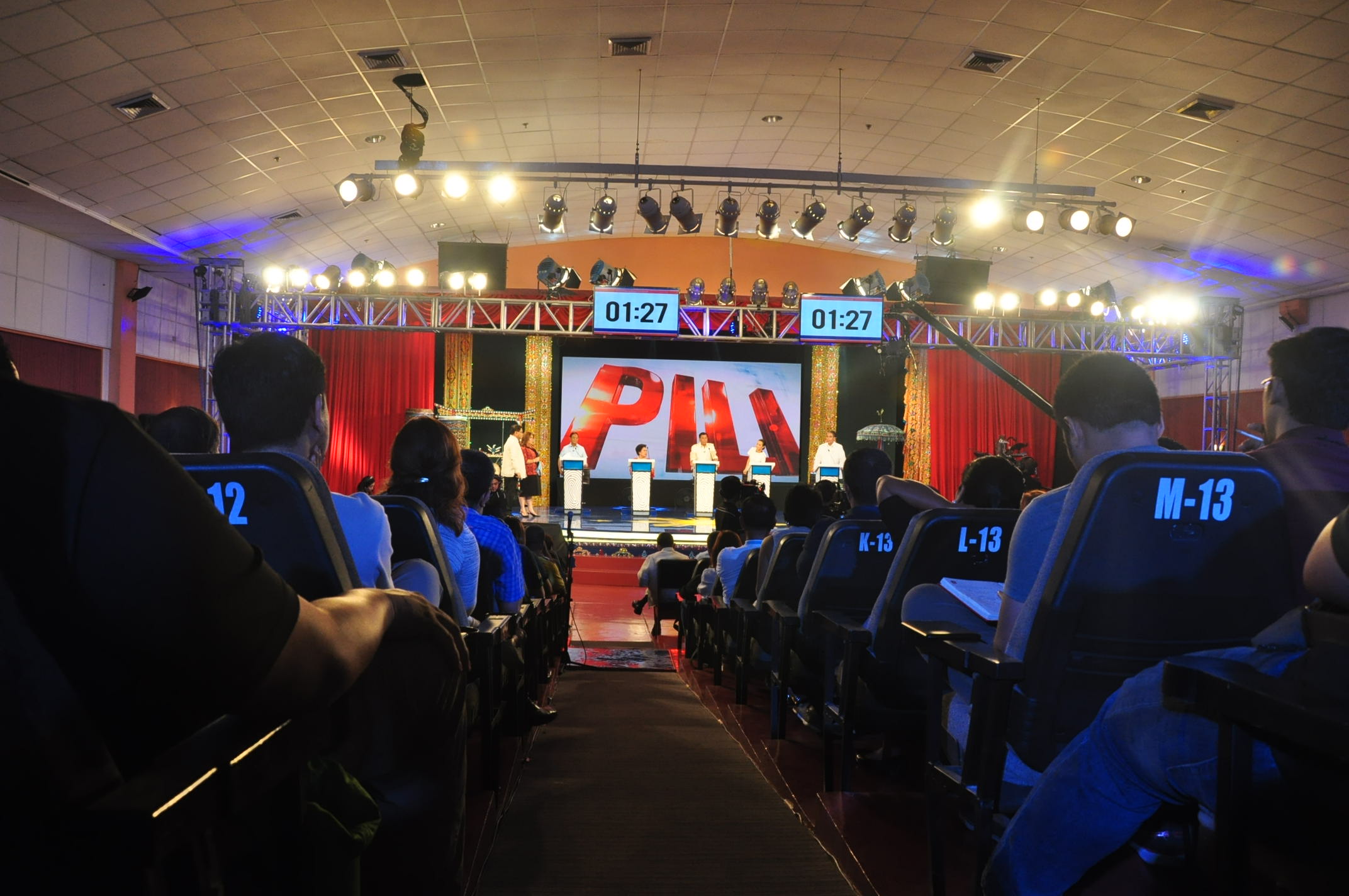 The second debate focused on poverty and development. There were many variations on welfare subsidies, but with Santiago demanding that candidates offer funding plans for welfare programs, and Binay again reiterating that decisiveness is key, along with the offering that he is decisive, that Makati has solved problems and that he can solve the nation’s.

Santiago said “promises are very easy to make” and said no president had ever ended hunger. She demanded to know where the money was coming from. Poe said the answer was a new president with a new perspective.

Santiago’s answer to poverty was to increase funding to health, education, social welfare. It was unclear how the programs would be funded, but Santiago said taxes should either lowered or raised but ran out of time to explain her plan.

Roxas said welfare programs have worked and will be continued. Santiago called Roxas’ program “promises in the sky” and demanded a funding plan. “Where are we getting the money? That’s what I’m asking. Where? Who is offering? Who is donating? Will it be rich people? Will we be raising their [taxes] just because they’re rich? Looking for fund sources is a huge problem. I can make an entire list from here to there of all my promises to you but they will each cost taxes.”

Roxas advocated cheaper loans and new technology for fishermen. Duterte agreed with the programs but said implementation will be a problem if officials are corrupt. Roxas said anti-corruption is the center of his and Aquino’s previous administration.

Asked about rice smuggling cartels, Duterte answered, “Is that it? I’ll do it in three days,” without explaining how. He added that he was willing to "stake my honor and my position that in 3-6 months this country will be clean.”

Rappler editors called this round for Poe. The senator showed how prepared she was for these topics, citing carefully selected data on farmers and discussing specific solutions to their woes – going beyond broad strokes. Rebutting her, Santiago said these are easier said than done and that previous governments have been unable to solve these problems, anyway. Poe shot back: That's why Filipinos need a new leader with fresh perspective. 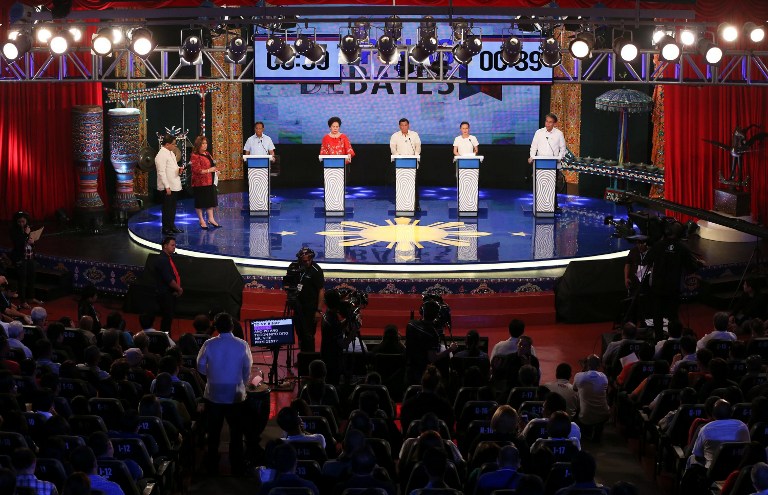 The third round discussed drugs, dynasties, and the future Mindanao.

Roxas talked up his current anti-drug program. Binay said there was a failure in enforcement and leadership, unlike his program in Makati. Roxas retorted that there are two Makatis – “the Makati that the Ayalas developed where there jobs, and Binay’s Makati where the drugs still are.” He added that “Makati has the highest drug rate, all the rich in all the clubs, every Friday, Saturday are there. Drugs are all over Makati.” Binay said he didn’t know where Roxas’ statistics came from, but added that Makati has never had drug problems, and that the entire Makati is prosperous. Roxas jumped in with an offer to bring Binay to Makati’s housing projects to demonstrate the city’s poverty.

Binay, asked about his stand on the anti-dynasty bill granting his own political dynasty, said there was a problem defining dynasties and argued there was no reason to deprive qualified and willing leaders of the opportunity to serve if elected. Santiago said dynasties were unconstitutional. Binay said Santiago’s son had also been elected, and earned laughs from the crowd. Santiago said it was a different matter, as her son only stayed one term in office.

Santiago and Poe both said they were opposed to the Enhanced Defense Cooperation Agreement (EDCA) with the United States.

Poe, asked if she supported the Bangsamoro Basic Law (BBL) said she wanted “transparent, inclusive, and sustainable” talks that included all parties. Duterte said it is necessary to “right the historical wrong committed against the Moro people,” and only federalism will appease Mindanao after the BBL’s failure to pass. Poe said there is space to discuss federalism, but recommend a “devolution of powers.”

Rappler editors gave this round to Poe again. She took a distinct position from Santiago on EDCA.

In her face-off with Santiago on the issue of the EDCA, Poe said that the situation seemed to be better when the Philippines was still hosting US bases, since it received financial remuneration for the use the country’s facilities then. "Now, under EDCA, their stay here is for free," Poe said in Filipino. She took the sober ground in the Philippines' maritime dispute with China, saying the Philippines should take the leadership role in ASEAN in pushing for a binding Declaration of Conduct of Parties in the South China Sea.

Netizens again voted Duterte as the winner in this round. Roxas again came in second.

The question: Why should you be the next President of the Philippines?

Binay said a president must practice “good governance and compassion to others, particularly to the poor.”

Santiago reiterated her constant campaign line. The next president must have, first, academic excellence – “head of the class or at least honor student.” Second, she should have professional excellence – “she was given an award by her fellow professionals because they are in awe.” Third, it should be a leader with moral excellence “with no stain to her record.”

Duterte said he is running because he loves the Philippines and its people, adding that, “I am a native of the Philippines.” He said of drugs, crime and corruption have long been issues, but that little has been done. “I am not trying to impress you. I will get rid of drugs, suppress crime, stop corruption in government in a matter of 3 to 6 months.”

Poe closed as she opened with specifics on Mindanao – the need for electricity, jobs, and a fight against corruption. She added that she would pass an Executive Order for Freedom of Information, explaining that  across the country, what is important is the trustworthiness of the leader. “Yes, it’s true, I may be new but our problems are not, and so many who have the experience only repeat and repeat their old solutions.”

Roxas followed through with his no-drama image. He said he lived a comfortable life and could assure his son of a comfortable future. “Why do I want to be president? Because I want that future for all of you. Free from hunger. Free from fear. Free to dream.” 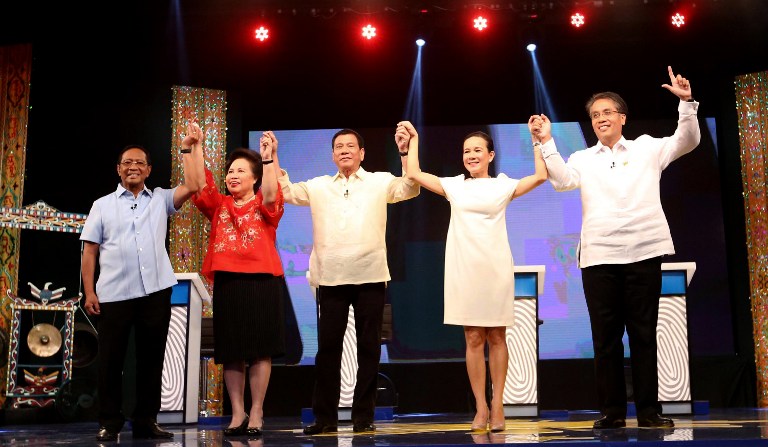