Facebook Twitter Copy URL
Copied
For now he is an independent candidate, but says he is 'open as a guest candidate' to the Liberal Party 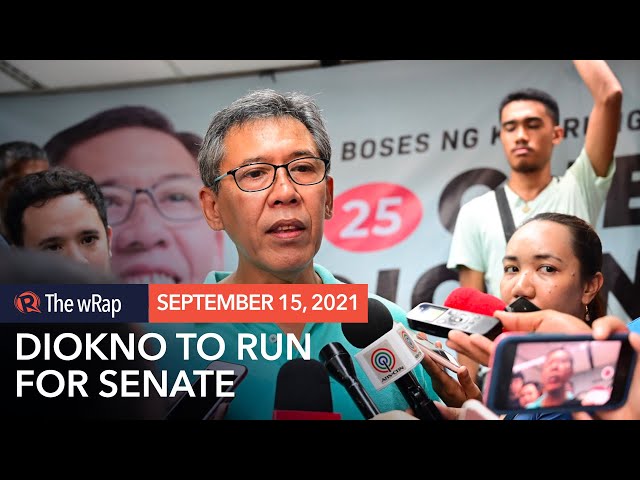 Chel Diokno, a veteran human rights lawyer, will run again as Senator for the 2022 elections, trusting that “a lot has changed” since the sorry sweep absorbed by his opposition slate Otso Diretso in the 2019 midterm elections.

“Yes, confirmed [I will run for the Senate in 2022],” Diokno told Rappler in a text message on Wednesday, September 15.

Diokno earlier announced his bid for the Senate during an interview on One News’ The Chiefs program Tuesday, September 14.

“I’ve had two years to think about it and to plan how to wage a better campaign, and during this time, a lot has changed. The political landscape has changed. We have seen how important it is to have a good message, and how to take advantage of social media,” Diokno told The Chiefs.

Diokno, son of anti-Marcos icon Jose W. “Ka Pepe” Diokno, ran for senator but lost in the 2019 elections, ranking 21st in a race for 12 which was dominated by President Rodrigo Duterte’s allies. The debacle of his Otso Diretso slate in 2019 was the first time in 80 years that the opposition did not win any legislative seat.

During the 2019 campaign, Otso Diretso said it could not fully hit the ground running because local officials were scared to visibly support them. The result was a stark contrast between jampacked stadiums for Duterte’s allies and thin crowds for the opposition.

Diokno said the Senate’s investigations into questionable pandemic contracts awarded by Duterte’s government will “definitely” affect the political landscape in 2022.

“But now the president’s term is ending and there’s no assurance that his people will win the next elections, the LGU officials, the ground war, is much more open now,” Diokno said.

Diokno, who has taken to TikTok and has been active on Twitter, said that for now he is an independent candidate. Diokno said he still supported the goal of opposition coalition 1Sambayan to come up with a unity slate. Asked by Rappler if he was open to joining the Liberal Party’s slate if ever, Diokno said: “I am open as guest candidate.”

Diokno said social media has “leveled the playing field to some extent.”

Diokno, who is chairman of the long-running human rights group the Free Legal Assistance Group (FLAG), caught the ire of Duterte early in the pandemic when he provided legal service to a Filipino who was summoned by the National Bureau of Investigation (NBI) for posting a comment critical of the government’s pandemic response.

The government was then cracking down on critics, with the NBI sending subpoena to dozens of people nationwide just for posting on social media, and especially those hitting Duterte’s longtime aide, Senator Bong Go.

Under Duterte, Diokno and FLAG have been at the forefront of legal challenges to the bloody drug war, filing one of the two petitions in the four-year pending case at the Supreme Court.

The filing of certificates of candidacy (COC) will run from October 1-8. – Rappler.com