BEFORE THE STORM. Comelec commissioners Rowena Guanzon and Aimee Ferolino pose for the cameras after the preliminary conference on the disqualification petitions against Ferdinand Marcos Jr. on January 7, 2022 u2013 weeks before their rift became public.

Facebook Twitter Copy URL
Copied
'In her quest for moral approval from the public, Commissioner Guanzon has stepped over the lines of common decency,' a lawyer from Commissioner Ferolino's office tells Rappler

MANILA, Philippines – The office of Commission on Elections (Comelec) Commissioner Aimee Ferolino accused Commissioner Rowena Guanzon of “stepping over the lines of common decency” after the senior poll official posted a now-deleted tweet that exposed her colleague’s personal phone number.

The two officials’ rift has become a public spectacle after Guanzon alleged that Ferolino was deliberately delaying the release of the ruling on the disqualification case against 2022 presidential aspirant Ferdinand Marcos Jr.

“In as much as we want to assume that Commissioner Ferolino’s number was accidentally posted, her actions, taken in their totality, leave us the impression that it was a conscious and calculated move to cause further pressure on penning a resolution that supports her opinion,” said a lawyer from the office of Ferolino who requested that his or her name be withheld.

“Commissioner Ferolino is very disappointed. In her quest for moral approval from the public, Commissioner Guanzon has stepped over the lines of common decency,” the lawyer added.

As reported by ABS-CBN News, Guanzon tweeted a screenshot of her text message to Ferolino on Sunday morning, January 30, urging the latter to write the ruling on the Marcos case already and not wait for her lawyers who were recovering from COVID-19.

The tweet was deleted after multiple people alerted Guanzon that the phone number of Ferolino had not been blurred.

In their statement to Rappler, Ferolino’s office also warned Guanzon that it was keeping receipts of “unethical acts” that she committed.

“Commissioner Ferolino could have posted the messages that Commissioner Guanzon sent her, to prove that the latter has committed unethical acts, but she refrained from doing so. Guanzon may have belatedly unsent the messages but we have receipts,” the lawyer from Ferolino’s office also said.

Rappler has reached out to Guanzon’s office for her side of the story via email on Sunday night. We will update this article once she replies.

Guanzon is retiring on Wednesday, February 2, and if Ferolino does not release a ruling by that date, the poll veteran’s vote to disqualify Marcos Jr. runs the risk of being invalidated.

Ferolino, the ponente or assigned writer of the ruling, previously told Comelec Chairman Sheriff Abas in a letter leaked to the media that there was “undue rush” from Guanzon’s side to issue a ruling on a “complex and highly rated” case.

Guanzon earlier promised the public that a resolution would be out by January 17, but Ferolino disputed Guanzon’s claim that 1st Division commissioners already committed to such a deadline.

“It was Twitter and not the commissioners who first knew of the promulgation date,” Ferolino claimed in her January 28 letter to Abas.

On Sunday night, Ferolino’s office promised that persuasion and pressure from all camps will not affect how she will decide on the case.

“She will objectively base her resolution on the applicable laws and jurisprudence on the given set of facts,” her lawyer said. 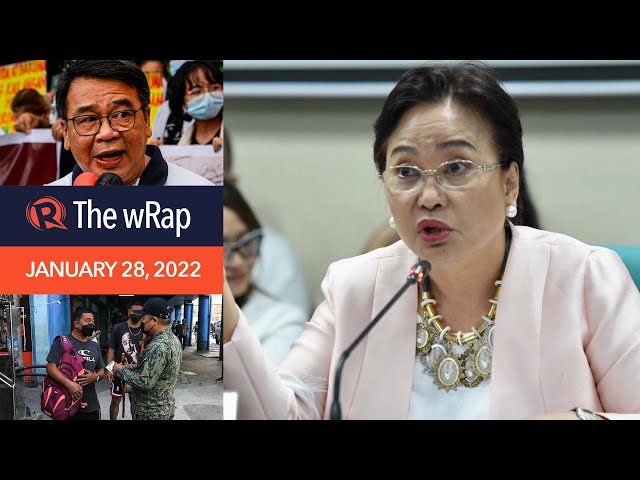 All three legal challenges against Marcos had cited his tax conviction in the 1990s as basis for his disqualification.

Guanzon is the only remaining appointee of the late former president Benigno Aquino III in the seven-member en banc. She was an audit commissioner prior to her stint in the Comelec.

Ferolino and her 1st Division colleague Marlon Casquejo, meanwhile, are President Rodrigo Duterte’s appointees who hail from his hometown Davao City. Both commissioners rose from the ranks after decades of service in the poll body.

Guanzon has alleged that the delayed Marcos case ruling was due to a politician who was trying to influence Ferolino, although the retiring commissioner has denied she was referring to Duterte. – Rappler.com