Comelec rules out online voting for OFWs in 2022 polls 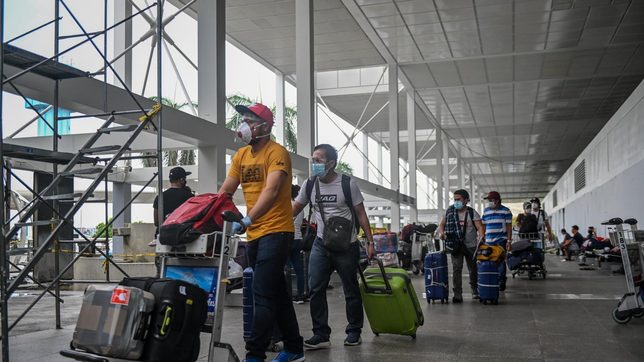 BACK HOME. Stranded seafarers arrive in the Ninoy Aquino International Airport in Pasay City on August 2, 2020.

The Commission on Elections discarded the possibility of online voting for select groups of overseas Filipino workers (OFWs), such as seafarers, in the 2022 polls.

“For the 2022 elections, right now, masasabi ko, hindi na (I can say it won’t happen). [Maybe] in future elections,” said Philip Luis Marin, attorney for the Comelec Office for Overseas Voting, during the poll body’s press briefing on Friday, June 11.

He said the Comelec is talking to three technology providers which will conduct “internet testing in the next couple of months,” namely Voatz, Indra, and Smartmatic.

Voatz is a US-based for-profit, private mobile election voting application, while Smartmatic has been the Philippines’ technology provider for the automated elections since 2010. Indra meanwhile is an IT company that has served elections in Europe.

Marin’s statement came a week after Senator Francis Tolentino lamented in a hearing that seafarers have had a hard time casting their ballots in past elections.

“It’s not voting anywhere, it’s voting where the embassy or consulate is located. And that unduly burdens the seafarers. Is it not possible to think of a way in which they can vote online?” Tolentino asked in a mix of English and Filipino on June 3.

Marin acknowledged on Friday that mobile voting would benefit seafarers the most.

“Kawawa iyong ating mga seafarers. Kapag nasa barko sila hindi sila makaboto (The situation of our seafarers is pitiful. When they are onboard a ship, they can’t vote),” he said.

Under that law, the poll body must then submit their reports to the Joint Congressional Oversight Committee.

Based on Comelec’s data, there were 1.42 million registered overseas voters as of May 19.

The poll body said it seeks to register 1.6 million more Filipinos for overseas voting in the 2022 national elections.  — Rappler.com