Facebook Twitter Copy URL
Copied
(6th UPDATE) It is appealable to the Comelec en banc, after which moves can be made to go to the Supreme Court 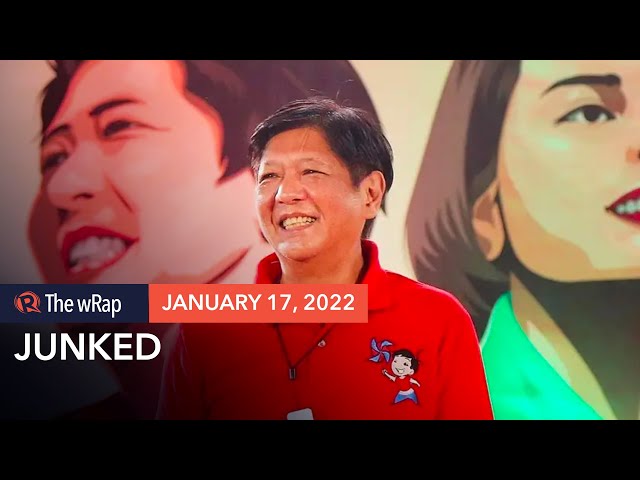 MANILA, Philippines – The Commission on Elections Second Division junked the only petition to cancel the certificate of candidacy (COC) of Ferdinand “Bongbong” Marcos Jr. – a win point for the son of the dictator who’s facing numerous cases against his presidential bid.

The ruling was released by the 2nd Division on Monday, January 17. It is appealable to the Comelec en banc, after which moves can be made to go to the Supreme Court.

This petition to cancel Marcos’ COC is one among the three pending petitions against him. Two others for disqualification remain. Christian Monsod’s petition is still pending in the 2nd Division, consolidated Akbayan/Ilagan/Mangelen is in the 1st Division. Te’s group will appeal to the en banc.

Reacting to this decision, Marcos’ spokesperson Vic Rodriguez said in a statement: “The petitioners’ mere creativity for writing and wanting what is not written in the law as basis to cancel the certificate of candidacy of Presidential Aspirant Bongbong Marcos is way too frivolous and unmeritorious to override the basic precepts of the Constitution.”

Comelec spokesperson James Jimenez also said on Monday that if the division rulings have not attained finality yet in the Comelec en banc when they print the ballots, Marcos’ name will remain on the ballot. If Marcos turns out to be barred from running via any of the petitions, “any vote garnered by that name in the ballot will be considered stray,” said Jimenez.

However, among the scenarios is Marcos being disqualified with finality, in which case, individuals with the same surname can substitute him. For example, his sister, Senator Imee Marcos, or his wife Lisa Araneta Marcos, can take his place. Jimenez said “the substitution can be made up to mid-day of election day.”

The substitute need not come from the same party (in Marcos’ case, the Partido Federal ng Pilipinas or PFP) because there is nothing in the rules that says so, said Jimenez.

The 32-page decision was penned by Commissioner Socorro Inting, with concurrences from Commissioners Antonio Kho Jr. and Rey Bulay.

Te’s group had argued that when Marcos said in his COC he had not been meted the penalty of perpetual disqualification, he committed material representation – the sole ground of a petition to cancel his COC.

The 2nd Division said that while such information was material, it was not false.

“Respondent cannot be said to have deliberately attempted to mislead, misinform, or hide a fact which would otherwise render him ineligible,” said the ruling.

The ruling agreed with the arguments of Marcos’ lawyers that the Court of Appeals’ (CA) amended decision in 1997 “did not categorically hold that respondent is convicted of a crime involving moral turpitude nor did it positively pronounce that respondent is meted with the penalty of imprisonment of more than 18 months.”

Te’s group argued that by sheer conviction of failure to file income tax returns, Marcos was automatically perpetually disqualified from public office because that is an accessory penalty of the tax code. Te’s group said it need not be spelled out by the CA.

The Comelec 2nd Division disagreed, saying “there is likewise no definitive declaration by the said decision that herein respondent is perpetually disqualified from holding public office.”

Kho wrote a separate opinion, with a different reasoning but the same result, which is to deny the petition.

The ponencia by Inting said that Presidential Decree (PD) 1994, the law amending the tax code and which imposed a penalty of perpetual disqualification on convicts, took effect only in January 1986. As such, it did not apply to the years that Marcos failed to file his ITRs which was from 1982 to 1985.

But for Kho, PD 1994’s penalty of perpetual disqualification is a principal penalty and not an accessory penalty. Principal penalty, Kho said, needs to be expressly written in the ruling.

“Since the decision dated October 31 [1997] of the Court of Appeals did not expressly impose the penalty of perpetual disqualification to hold public office in convicting respondent Marcos Jr, such penalty is not deemed written into or considered part of the final judgment of conviction of respondent Marcos Jr,” said Kho in his seven-page opinion.

If Marcos’ COC is canceled on appeal and affirmed with finality, however, not only is he barred from running, Marcos also cannot be substituted.

Whatever the outcomes are of the different petitions, they’re expected to reach the Supreme Court, but Rodriguez refused to elaborate on their strategy moving forward. “Allow us to enjoy momentarily this legal victory that was served to us this morning. As to what our rivals will be doing next, I don’t engage, as I have stated many, many times, [in] speculation. If they want to exhaust all legal remedies available to them it is within their right and we have always been respectful of the rights,” Rodriguez said in a press conference Monday afternoon. – Rappler.com